~ Order now and choose your own delivery date at checkout ~ FREE delivery when you spend £55 ~
Home Learn About Cheese A visit to Stonebeck cheese – by chief cheesemonger Anna!
Show Sub-menu

A visit to Stonebeck cheese – by chief cheesemonger Anna!

In October 2020 chief cheesemonger Anna went to visit Stonebeck cheese.  Here she recounts her journey and explains what helps make the cheese so special.

A few of the Courtyard Dairy team recently went on a road trip to Stonebeck. The journey up to the farm consisted of two different vehicles: to begin with, Andy drove us to a tiny car park at the very top of the Dales where we were to be met by Sally and Sam who would pick us up and take us down the lane to the farm.  When the two 4-by-4’s arrived we quickly realised driver Sam was a lot smaller than all of us; Sally moved on to reassuring us even though he may only be 11 and not insured he is a very good driver. It quickly became apparent this was very true and probably a safer option than Andy driving! 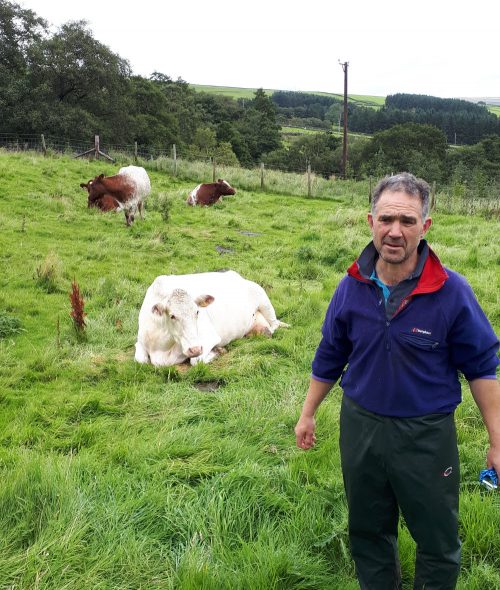 Arriving at the farm we were greeted with a cup of tea before being shown round the farm. Andrew showed us his milking parlour and how it works with a generator; as they are so remote, they do not have enough electricity to run the pumps. The milking parlour is connected with pipes so the milk can run over the farm and drop into either the cheese making vat or the milk tank. Cheese is only made on three days so the other four days each week the milk is cooled and stored in a tank to be used the next day for cheese making.

Stonebeck is inspired by Wensleydale, but the recipe for Stonebeck is not sourced from a single recipe: Andrew and Sally have evolved the recipe from several sources including speaking to two ladies in the village who remember making cheese with their mothers, and remembering what they did when they were farming the land. One of the ladies, Mrs Peacock (102!), described how they used milk from Northern Dairy Shorthorns to make their cheese.  These are now an endangered breed and we were lucky enough to see one of the biggest herds of them.

Andrew tries to farm the cows as traditionally as he can: they have free range of the grazing, meaning they can be wherever they want at any time. They are a special milking cow as they can cope with only one milking each day. They produce less milk than the average milking cow but this is what makes them perfect for what Andrew needs and for what the land can cope with. 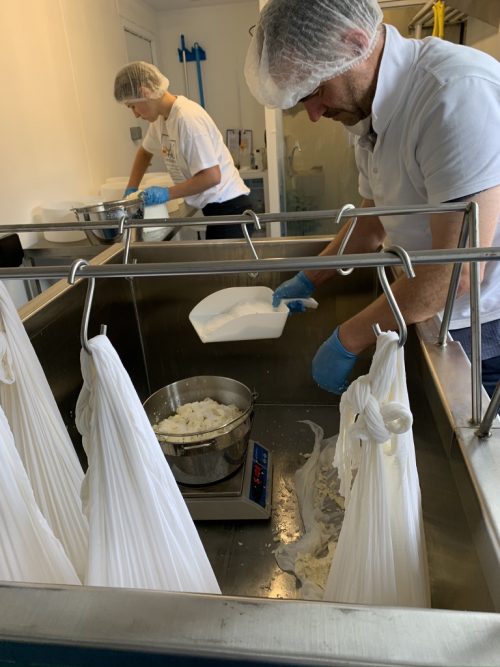 The cheese-making room and the maturing room are made up of shipping containers which interlock with each other. When we made it into the make room Andrew had already begun making the cheese. The curd was in the muslin bags draining. This is one of the things that makes Stonebeck such a unique cheese as this is done to give Andrew time to do all the day-to-day jobs that need doing as well as the cheese making.

After three hours in the muslin bags Andrew then weighs 5kg of curd and adds salt. The salt and curd are then mixed. On this occasion Andrew’s daughter was there to help with the final stage of the process, which is pulling apart the curd and putting it into the moulds.

The last part of the cheese-making is sewing the cloth round the cheese; this is done by Sally as, apparently, Andrew is allergic to sewing.
Sally hand-sews the cloth just round the side of the cheese (all our other cheeses in the shop have cloth on the top and the bottom as well). I thought there would be a scientific reason for Stonebeck just having one cloth but it turns out the reason there is only one is because in the pictures of old fashioned Wensledale they only had one, so that is what they do! 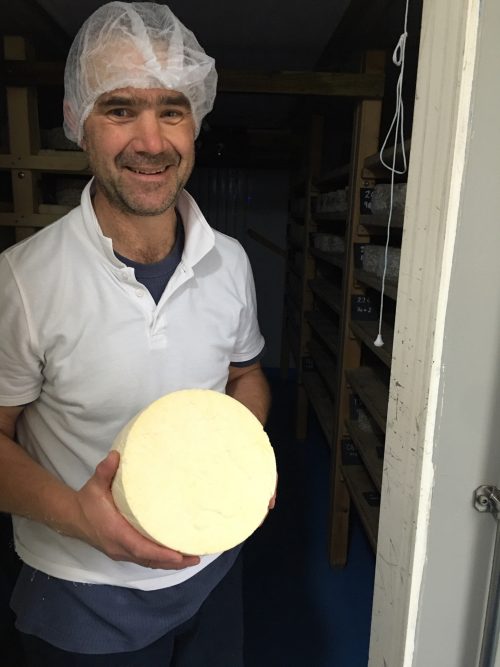 To finish the day, team-member Katie and I went to see the cheese maturing, and Andrew explained all the batches and how some end up different because of daily changes within the making process and the cows (diet, climate, timings slightly altered in making…. etc.).  The other team members, Andy, Deb and Jenny, had found their way into the maturing room and they returned with a batch of cheese they have named Dirty Daisy after one of Andrews favourite cows ‘Dirty Daisy’. It was the one batch Andrew said was not like the others – it didn’t taste the same because the boiler broke which caused an issue in the cheese-making.  But even though it wasn’t ‘Stonebeck’, it was still good and The Courtyard Dairy loves a special cheese – even if it will never be made again – so Andy bought it all to take back to Settle.

A successful day was had by all The Courtyard Dairy team, and we arrived home with a car full of cheese in perfect time for Andy to get to his Zoom Virtual Cheese Tasting.

Find out more fascinating facts about cheese – simply sign up to The Courtyard Dairy monthly newsletter for regular exciting offers and interesting info from the cheese-world. Sign up here.

Farmer and cheese-makers, Tom and Clare Noblet make Fellstone cheese on their farm near Kirkby Lonsdale in Cumbria. Andy interviewed them to find out what makes these fantastic cheese-makers tick….