~ Order now and choose your own delivery date at checkout ~ FREE delivery when you spend £55 ~
Home Learn About Cheese Can I eat the mould on my cheese? Mould on Cheese – your questions answered.
Show Sub-menu

Can I eat the mould on my cheese? Mould on Cheese – your questions answered. 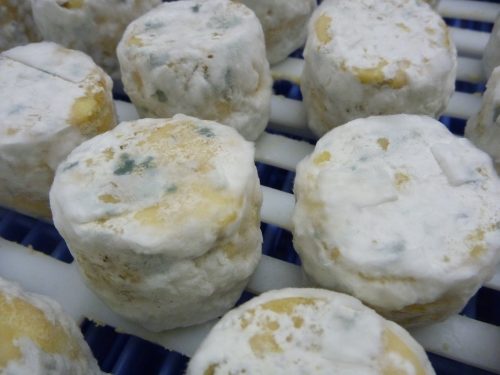 After years of buying food that has been processed, neatly wrapped, sealed, and is bright and clean, people have become afraid of mould. But cheese and mould have been best friends for thousands of years. Consumers seem to be perfectly happy eating the blue (mould) in blue cheese and the white (mould) rind of Brie, probably because that is ‘expected’, but anything that looks a bit rustic – unexpected spots of mould, blotchy, different coloured rind – is often discarded.

In fact there is nothing ‘wrong’ with the mould you see on the outside rind of a cheese – from blue and green dots to bright yellow and grey ‘fluffy’ cheeses, the moulds on the rind are fine to eat!
But the mould that grows on the cut surface of a neglected piece of cheese is different from the moulds that grow on the outside of cheese. Where there’s mould growing on a cut surface, the mould should be cut off, or the cheese discarded.
In other words: mould on cheese rind is usually good, mould on cut surfaces of cheese is not good.

Thanks to advances in science, nowadays cheese scientists have refined specific strains of mould to give steady and stable homogeneous cheese rinds and more balanced cheese flavours. Cheese-makers can buy these strains from the scientific labs to help increase the chance that the exact rind or blue-interior they desire will grow and dominate.

But once upon a time this didn’t happen. Long ago, for example, Brie wouldn’t have been perfectly white – it would have had an array of splodges of green, blue and black on the rind.
This variety of different moulds isn’t ideal because they don’t look as nice, but they are perfectly edible – indeed one cheese’s foe is another cheese’s friend. For example on Brie, black mould (called ‘mucor’ or ‘cats hair’ after its appearance) gives the cheese black spots and makes it look dirty, so nowadays most producers try to discourage it from growing on white-rind cheeses. Take another cheese however, like Tomme de Savoie, and the reverse is true: the producers encourage the black mould to grow and that’s what gives their cheese its characteristic dark rind. So ‘unwanted’ mould is not necessarily a problem, other than it reduces consistency and interferes with what the manufacturer is trying to achieve in terms of what appearance and flavour.

In some cheeses, a ‘natural-rind’ is often encouraged – this is quite commonly seen in the little goats’ cheeses of France – and the cheese will grow a community of the wrinkly Geotrichum yeast, leading to a dappled mouldy-looking rind. These moulds add flavour, and although they can be seen as something to be avoided, they are essential for that cheese maturation and are completely edible.

So why are we afraid of mould?

Historically, the growth of mould on food was taken as an indication that the food was old or poorly cared for, and that bad bacteria (called pathogens) could also be present. These bad pathogenic bacteria are, however, not associated with the visible mould on the outside of cheese. Mould will grow very readily on the outside of cheese because cheese provides all the nutrients the mould needs to help it grow – which explains why the mould is often encouraged in order to provide flavour (e.g. on Brie and in blue cheese) – and is not, therefore, an indication of the presence of pathogenic bacteria.

When grown in a controlled cheese-making environment, Penicillium mould on the rind of cheese quickly stops producing toxins as it adapts and evolves, enabling it to help produce more interesting flavours in the cheese (e.g. buttery, vegetal – like Brie and Camembert) rather than mouldy/earthy taints (for more details, see this scientific study in The American Society of Microbiology >).

So can I just cut the mould off the cheese in my fridge?

This mould that grows on the cut surface of your cheese at home is Penicillium commune (more often than not).  It is different from the mould often encouraged in cheese and is unwanted. It can produce off flavours (mouldy/earthy notes) and taints, and also potentially toxins (called mycotoxins – e.g. cyclopiazonic acid) which could make you ill.

Therefore, mould on the cut surface of cheese won’t be adding a desired flavour, is not very nice and will have formed a network underneath its visible part. So it shouldn’t be consumed.  Although it could be cut off, if you choose to – it is advisable to cut off a reasonable thickness (5mm) to ensure it is all removed, and then consume the cheese quickly, so preventing the mould re-forming.

Remember, mould on cheese rind (exterior) is usually good, BUT mould on cut interior surfaces of cheese is best avoided.  Throw the cheese out, or cut off the mould and any trace of its underlying network.

The best thing to do is to try to consume your cheese quickly, wrap it tightly and ‘clean’ it regularly (take a sharp knife and scrape the gloss off the cut surface) to avoid mould even forming on.

(It is worth noting however, that although this Penicillium commune can produce mycotoxins, research has shown that in cheese they seem to occur at low levels, well below what could cause harm to human health: “Repeated analysis of cheese showing mould growth has failed to demonstrate significant or persistent quantities of mycotoxins beneath the rind of correctly manufactured cheese without fissures, in spite of the potential for mycotoxin production by the species of mould observed.” (ref. P. Neaves and A.P. Williams, 2010).

What about if I am allergic to penicillin – can I eat blue cheese?

The simple answer is yes.

The Penicillium species used in the production of Brie-type and blue cheeses is distinctly different from the species used to produce the antibiotic penicillin. There are many different species of Penicillium mould. Varieties of it are present everywhere and are very tolerant, which is why they grow so readily on all food stuffs (from acid lemons to salty fish). The species commonly used to grow the antibiotic penicillin came from a mould growth common on cantaloupe melon (now known as Penicillium chrysogenum). “Penicillin is only produced in significant quantities by 1 of the 150 or more known species of Penicillium”. (ref. P. Neaves and A.P. Williams, 2010).

So why do some producers add mould to cheese?

White (Brie/Camembert) and blue are the moulds most commonly added. In both cases the moulds alter the texture and flavour of the cheese by breaking down fats (Lipolysis) and proteins (Proteolysis). The breakdown of the cheese curd produces different and desirable flavours and textures in the end, fully-mature, cheese. The resulting flavours and texture can vary depending on the exact strains of mould used, and also what these moulds have to work on (affected by how the cheese is made and matured, and the make-up of the milk used to make the cheese).

Recent research into cheese rinds has found that rind hosts a succession of diverse communities of yeasts, bacteria and moulds that work together. Interestingly this research has found that even if you add certain moulds at the beginning of the process, they are often not found on the final cheese because other moulds grow alongside and, sometimes, dominate these added strains. It depends on many factors including minute alterations to the cheese-making process*, the unique climatic conditions (including weather and seasonal changes), the original composition of the milk* and … luckily you can read more about this research here >.

(*e.g. How it is moulded, drained, dried, matured, and the temperature and humidity at each stage.) 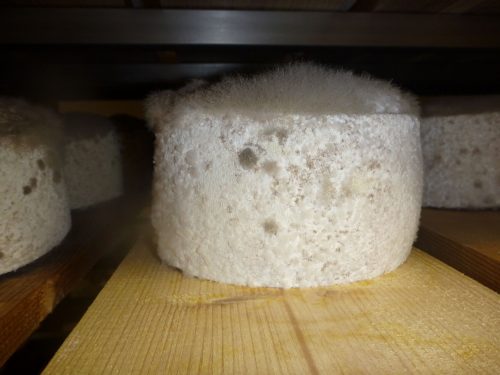 What moulds most commonly grow on cheese?

There are many other substances that grow on the rind of cheese including the yeast-like Geotrichum (which gives goats’ cheese, Brie and Camembert their wrinkly, undulating, rinds) and bacteria like the famous Brevibacterium linens, commonly associated with ‘smelly’ washed-rind cheeses and their orange pigmentation (like Epoisses and Munster).

If you are interested to learn more about the range of moulds and bacteria that grow on cheese (and other foods like Kimchi and Saucisson) check out the fabulous Microbial Foods website >.

Cheese Ageing – how to mature and look after cheese.

Advice for shop owners on how to mature, look after and age cheese; most cheese shops across the land will state that they ‘mature’ or ‘age’ cheese.  But what does…

An apprenticeship in cheese ageing …. Andy’s latest update from Mons Fromages, with more information on what Andy is learning about the importance of spruce boards and beautiful bacteria  like…