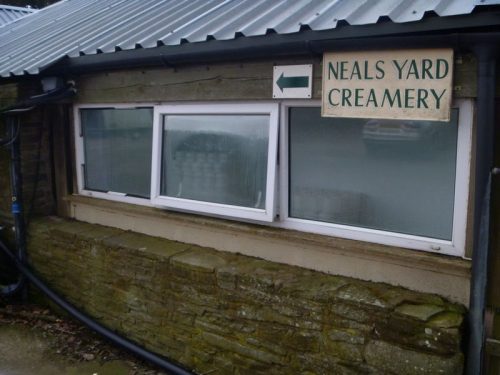 Late last year I went off into the deepest darkest depths of Herefordshire to find one of Britain’s most-outstanding and pioneering cheese makers: Neal’s Yard Creamery, which started out as an offshoot of Neal’s Yard Dairy.

Charlie Westhead was their first full-time employee in the 1980s.  Soon after Charlie joined, they moved cheese production from the cellar in the Covent Garden shop to Sevenoaks, hiring space on a farm where young cheeses (Perroche), Yogurt and Crème Fraiche were made.

In 1990, however, the cheese makers (Perry James and Beatrice Garroche) left the business and Charlie was taken out to Sevenoaks to be given two days instruction on how to make cheese, before being left to it.  He is the first to admit his early cheeses weren’t that great!

The cheeses he eventually developed came about as a process of experimentation.  First was Ragstone – a rich goats’ milk log made in a similar style to Golden Cross (Neal’s Yard Dairy couldn’t get enough Golden Cross at the time, so Charlie developed a similar cheese and named it after the Ragstone ridge where he was based), quickly followed by Finn – the creamery’s first cows’ milk cheese. (Read more about Finn here).

Charlie later took control of the business and separated it from Neal’s Yard Dairy, becoming wholly owned by himself and his wife Grainne (pronounced “Gron-yer”).

They didn’t like being stuck in a farm outbuilding, however, so Charlie and Grainne searched for some cheap land to which they could move the dairy.  They found a small place on Dorstone Hill, Herefordshire, and moved the business there in 1996.

With no business plans and no accounting history, they only thing they could say was that they could afford the rent and the mortgage!  But they got the go ahead!

Neal’s Yard Creamery was all set to go at Caeperthy Farm.  The whole creamery is designed to be

sustainable, with an efficient wood burner, solar power, wind-power generation, and all their wastewater filtered over their own wetland system of reeds, willows and orchids.

In recent years they recruited help in the form of their talented head cheese-maker, Haydn Roberts, who helped in the continued development of new cheeses, including the outstanding Dorstone.  Read more about what makes Dorstone cheeese so special here.  After several years helping design some of Neal’s Yard Creamery’s outstanding cheeses Haydn Roberts has set up by himself – watch this space….

Dorstone goats cheese is a regular favourite of cheesemongers across the UK.  But what makes Dorstone so special – find out it’s story, history and how Charlie Westhead’s excellent cheesemaking…

Finn Cheese: the story of the ‘great white one’