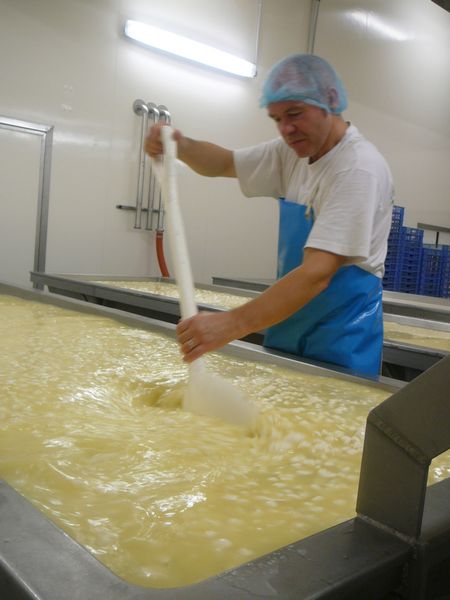 In the shadow of the real Mont d’Or (gold mountain) lays a small dairy.  At 6.00 am in the morning its three big long vats are being gently filled with milk ready for the production of a very special cheese: Vacherin Mont d’ Or (also called Vacherin du Haut Doubs).

This special cheese has kept its magic probably because it has retained its seasonality.  It is only produced between 15th August and 15th March, and only sold between 10th September and 10th May.  It’s a soft, unctuous, rich cheese, to be enjoyed melted in the oven or spooned direct into the mouth.  When I heard the first whispers from the mountain pastures that the Vacherin Mont d’Or season had arrived, I knew I had to go there.  There was something magical calling to me, telling me to climb high into the mountains to see at first hand how this unique cheese is made, so off I went to make Vacherin Mont d’Or…

Bien sûr, there are copies.  Good ones, too.  Péchegos, made

with sheep’s milk, for example, or Cabri Ariégeois, made with goats’ milk, or the British alternative: Winslade, but the original still has the name and the following.  From the 10th September, as the first Vacherin Mont d’Or trickles into the shops, all the copies are forgotten.

Patrick (“Patreeeek”) Richard is one of the few men that still produce this wonderful cheese, combining this work with selling the cheese, greeting his customers, collecting the milk from local farms, and being the local choirmaster.  And it’s not easy – it’s very difficult to plan for and to organise enough staff for the period September to Christmas, when sales go through the roof as everyone in the world is buying, and baking Vacherin Mont d’Or. 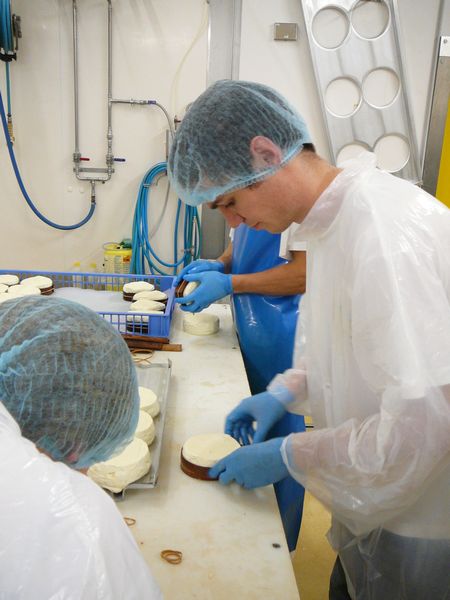 I joined Patrick early in the morning and spent the day with him making his world-renowned cheese.  As Patrick sliced through the curds to start off the process of making the cheese, his forearms bulged; the strong muscles toned by hours of cutting and stirring heavy cheese every day.  The continuous cutting forms little cubes of goodness that gush out into moulds, eventually to become the delectable Vacherin Mont d’Or.

As the curds settle in the moulds we retire for breakfast… and wine!  It’s 10.00 am and I’m enjoying croissant, Morbier, Raclette, Comté, and, of course, Vacherin Mont d’Or, all washed down with copious glasses of Vin de Jura, and accompanied by Patrick’s stories and jokes – he’s a man with an amazing joie de vivre (the French equivalent of my great friend and producer of Mrs. Kirkham’s Lancashire Cheese fame, Graham Kirkham).

With the wine finished, we dart back down to finish making the Vacherin Mont d’Or.  Wrapping the newly-formed fresh cheese with the traditional spruce bark it’s then lovingly placed deep in the caves, and regularly washed to encourage its beautiful red coat to form naturally.

After a few weeks the spruce wrappings are snipped open, and the cheeses placed into circular boxes, in which they will finish their maturation to the desired stage, ‘gooey’ or firm.  My English colleague once foolishly asked Patrick if he ate his cheese in the popular way – by cutting off the top and spooning the gooey mess out.  Patrick looked upon him with disgust, “no we eat it like every other cheese, cutting slices of it when it’s firm: we’re Jurassiens, not Parisians!”

The best Vacherin that Patrick ever tasted, he says, came about when a batch was sent out to be delivered,

but was rejected and then lost in the transport network of France.  The cheeses eventually returned to Patrick two weeks later.  What happened to those Vacherin Mont d’Or on their travels we’ll never know, but by-gum (or French words to that affect), they did taste amazing, he says.

As the Mont d’Or cheeses are transferred to planks to be washed, Patrick takes me upstairs for a bit more alcohol (a delightful Anis, that hasn’t the harshness of Pastis or Ricard).  As we sit, Patrick bursts into song, something for which he is renowned.  It’s not surprising: I felt like bursting into song myself as I admired the wonderful panoramic views from his dairy, and sampled his amazing cheese.

A few more glasses of Anis later and I’m asleep in the car being driven home.  As I sleep, Patrick’s refrain repeats itself lovingly over and over in my head: “Aux fromages, aux fromagers, à tout ce qu’ ils font” (‘To the cheese, to the cheese-maker, to all that they do…’).

Read The History of Vacherin Mont d’ Or here about how it came about, and why it is still a seasonal cheese….