~ Order now and choose your own delivery date at checkout ~ FREE delivery when you spend £55 ~
Home Learn About Cheese Producer Visits An interview with Todd Trethowan: maker of Gorwydd Caerphilly cheese
Show Sub-menu

An interview with Todd Trethowan: maker of Gorwydd Caerphilly cheese 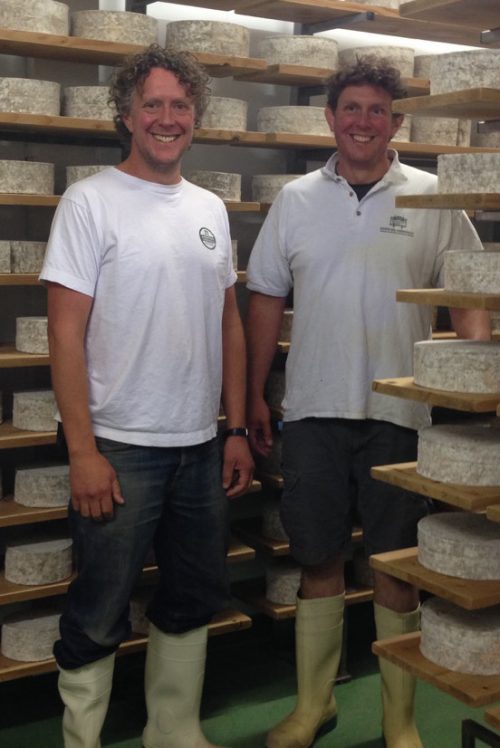 An interview with Todd Trethowan; cheese-maker of the fabulous Gorwydd Caerphilly cheese! Find out how Todd got into cheese, what he loves on the food scene, the ethos for his business and his recommendations on the best places to eat and shop for food!

Brief synopsis of your business & career?

We’re a cheesemaker based in North Somerset. We make one kind of cheese: Gorwydd Caerphilly.

We’ve been in business for almost 20 years. We started making on the family hill farm, Gorwydd Farm in West Wales, which is where the cheese gets its name. A few years ago it became apparent that it was going to be very difficult to upgrade our facilities in the beautiful, yet remote, location of Gorwydd Farm, where we had outgrown the old converted farm buildings. We decided to look for new premises, and were drawn to Somerset by the quality of its dairy farming. We found what we were looking for at Puxton Court Farm – a fantastic milk supply from a single herd of pedigree Holsteins and Jerseys.

Caerphilly can be sold at just a few days old. Ours is an aged Caerphilly. We typically mature it for a couple of months in our storerooms which are carefully monitored for temperature and humidity.

What made you get into doing what you do?

I took a summer job at Neal’s Yard Dairy when I was a student in London. It was just to tide me over – I literally thought I’d only be there for a couple of weeks. But I loved it and my interest in cheese grew. Randolph Hodgson (the owner of Neal’s Yard) fixed me up with an apprenticeship with a cheddar maker called Dougall Campbell in Wales. That was my first apprenticeship, and others around the country followed, until my brother Maugan and I were finally in a position to start making our own cheese.

What is your philosophy for your food/business?

Do one thing and do it really well.

A typical day at the dairy is busy! A cheesemaking day is around ten hours long. We make to a very traditional, handmade recipe that uses no machinery and is labour-intensive. The cheesemaking day is dictated by timings and temperatures, and we also have to keep on top of preparation for the next day’s making – taking delivery of milk, bulking up starter cultures and so on.

While the mornings are a bit quieter, consisting of heating up milk and adding ingredients (starter cultures, rennet), the afternoons are very physical. We spend a couple of hours bent over the vat, texturing the curds by hand and filling the moulds so that they can be stacked up in our old cast iron presses.

While there is a routine we have to stick to, the days can be very varied. As well as making cheese, Maugan and I are running a business and different things crop up all the time that we have to fit in around the cheesemaking. For example, we’re going to New York in June to speak at the Cheesemonger Invitational and the Fancy Food Fair, and we need to prepare for that. We’ll be at the Slow Food Festival in Italy in September, which again requires a lot of preparation. On top of that, people turn up at the dairy all the time, and sometimes we find ourselves having to juggle different visitors, whether they be contractors to service equipment, customers wanting to look around, or deliveries. Things can get really busy at times!

What’s the best part of your job?  And do you have a favourite memory from work?

One of the best parts of the job is working with a really great team of people who are all committed to making the best cheese possible. I also enjoy the physical nature of cheese-making – it’s surprisingly varied. And not forgetting a game of darts in the tea break!

A couple of favourite memories relate to moving the dairy to Somerset. We knew we were always going to be taking a bit of a risk, moving the dairy, as any slight change in the environment or ingredients can change the cheese. In the of spring last year, while we were still building the new dairy, we took 1500 litres of milk from the new milk supply at Puxton Court Farm up to our dairy in Wales and made a batch of cheese. A couple of months later we had our first taste of this cheese made with the new milk supply – it was delicious and we knew we were onto a winner, a moment to be savoured!

A second favourite memory will always be the day we first made cheese in our new dairy. It was years in the planning, months in the building, and an awful lot of hard work, so to finally be making cheese in this building that was custom designed to our specification was a really fantastic moment.

When you are at home what is your staple dish for the family?

Pasties! The Trethowan family has its origins in Cornwall, and I’ve been learning the family pasty recipe so I can carry it through to the next generation. It’s lovely to be cooking for my two daughters, and I hope they’re taking notes so they can carry the recipe on through!

What is your favourite place to go eat (if you’re not eating at yours!)?

There’s a really good local restaurant that opened recently around the corner from where I live, called Birch. They have their own garden and orchard, and make the best cider.

I love campsite cooking – producing a large spread in the face of adversity, a massive skillet on a big gas ring. Cooking and eating outside with a large group of people is a real joy.

A favourite place for a drink is the Seven Stars Pub in Bristol – it’s a proper old pub, and great for cider.

Do you have any other hidden foodie gems you think are worth people knowing about – shops, producers or otherwise?

The Walled Garden in Wrington is the most beautiful setting, in a Victorian walled garden with a view across to the Mendip Hills. The restaurant is supplied almost entirely by the garden produce, and other very local suppliers.

Bill Oglethorpe’s raclette is definitely worth knowing about!

Do you have a favourite cheese at the moment?   If so, why is it your favourite?

At the moment, my favourite cheese is ours. I’m just really enjoying it. Caerphilly is a simple recipe, and it’s so nice to let the milk be able to really express itself.

Any cheese made by Mary Holbrook, she’s always an inspiration. In fact, my younger daughter’s middle name is Emlett, named after one of Mary’s cheeses. 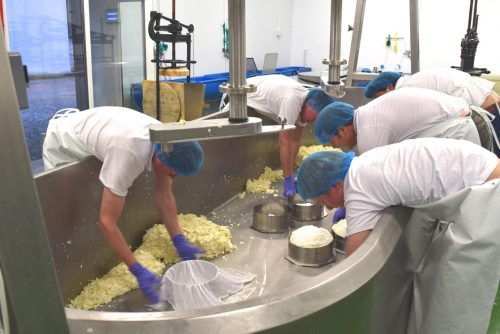 Where do you look for inspiration in your business?

Randolph Hodgson of Neal’s Yard Dairy has always been a source of inspiration.

Another important figure in my cheesemaking journey is Jane Scotter from Fern Verrow. She was the person who trained me when I worked at NYD and I’ve never forgotten her work ethic: A seven o’clock start means in your boots and dairy whites ready for work at 7; there’s never nothing to do – even if it’s just cleaning; have confidence in the quality of your product – if you think it’s good, don’t be afraid to say it. These are just some of the ideals she instilled in me, and it was a real education working with her.

Ongoing, I admire anyone that keeps things simple – there is always the temptation to over-complicate things.

What couldn’t you live without?

Darts! A game of 501 keeps us sane during the working day!

What is the best success you’ve had with your product?

Awards aside, managing a successful move to a new location. Not only did we have to move equipment and stock, but we had to create the right environment for the new cheese to mature, and this meant bringing our precious molds with us. We brought down hundreds of unwashed cheese boards and left them in the store rooms to populate the new maturing environment. It worked – not immediately, but within a couple of months of making here our Gorwydds were taking on their characteristic grey-green rinds, and tasting delicious.

What is your plans for the future?

We’re always looking at continually improving our Caerphilly, by making small, incremental changes. We never tire of looking for small improvements. It’s the attention to detail that gives our cheese its vitality. We want to capture the essence of the milk and the pastures that have fed it in each mouthful. It’s great to be working with a single herd and a very skilled herdsman, Steve Hearn. Now that we’re in this three-way partnership with the herd and herdsman, we can have real input into the way the cows are fed, and consequently the milk that is produced. This will be a learning curve for us, as we haven’t had this direct relationship with the cows before, and it’s very exciting.

You can buy Todd’s creation: Gorwydd Caerphilly here, or follow Todd and the family business on twitter: https://twitter.com/trethowansdairy