~ Order now and choose your own delivery date at checkout ~ FREE delivery when you spend £55 ~
Home Learn About Cheese Producer Visits Bleu de Termignon: try it before it dies out…
Show Sub-menu 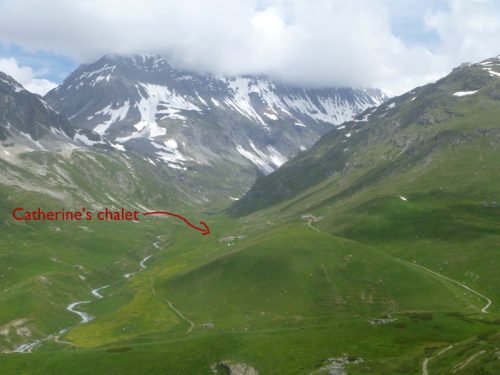 The panoramic views.  The long walk to get there.  The wonderful flavour.  There are lots of things that are memorable about Bleu de Termignon, not least the fact that the production methods, more than any other I know, continue to this day to follow the ancient cheese-making techniques, whilst the rest of the world has moved on.

But this will soon come to an end, and then this delicious cheese will sadly pass into history.

I’d known of Bleu de Termignon for sometime, so it was with excited anticipation that I managed to arrange a visit to one of the last three producers.

So I set off into the deepest Alps, to visit a chalet perched 2000m above the town Termignon in an area that can only be reached by foot, and was still, when I visited in July, covered by snow.

Catherine Richard is in her late 50s, and has made Bleu de Termignon all her life.  Whilst growing up it was her job to sit with the cows in the Alpine meadows, watching them all day, as her parents toiled over making the cheese.  Now, in early June each year as the snow begins to melt and the skiers go home, Catherine brings her 15 cattle up the mountain to carve out her existence for the five summer months living in her small chalet and making the cheese as her parents did. 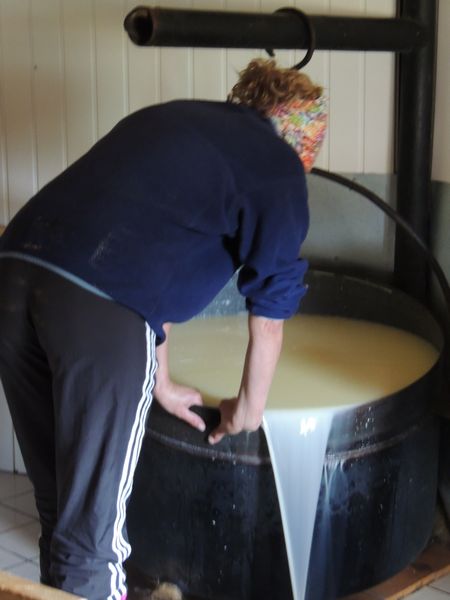 After a long drive deep into the French Savoie region, to the village of Termignon, I took the chalet route to park at the highest car park.  It was from there I trekked for 45 minutes through the beautiful Vanoise national park to Catherine’s remote chalet.  As I hiked, I admired the diverse, untouched mountain pasture, full of herbs and wild flowers, that is unrivalled for cheese-making, a pasture that helps give Alpine cheeses their amazing complexity and rich flavours.

Every morning Catherine and her husband milk their cows, transporting the milk to a large cauldron where the cheese making starts.  As the rest of the world has moved on, even ‘traditional’ cheeses (like Montgomery’s Cheddar, Comté, etc.) have adopted modern practices to some extent – the use of better presses, starter cultures, steel equipment, etc – but isolated out here, with no phone line, electricity or piped water (just the local stream), the production of Bleu de Termignon has not changed in 200 years: Catherine makes cheese the way the ancient books describe it.  I felt like I had stepped out of a time machine.

Originally the farm labourers would cross over the mountains from Italy to work seasonally in these chalets.  At the end of the summer it was their job to look after the cows, whilst the chalet owners went down the mountain to make hay and sell their best cattle.  The labourers would take their payment in the form of what spoils they could transport back home, so they would ‘preserve’ the bits of curd they could obtain from the small amount of milk produced by the animals at the end of the season by ‘pickling’ it in the leftover whey from the cheese-making.  Once they had enough curd, it would be combined to make a big cheese that they could then take back over the Alps for the winter months.  This is still the basis of the recipe for Bleu de Termignon.

To make her Bleu de Termignon, Catherine cuts the curd made from the fresh milk into little bits before it is ‘pickled’ overnight in a wooden churn full of whey (the whey from the first day is used all season).  The next day the curd is broken up and salted before being put in wooden moulds to compress gently overnight under its own weight.  I asked where the wooden moulds came from.  Catherine replied, “Well that one there I made, that one my grandma made, that one my great grandma made…”

This use of wood and continual use of whey (a bit like a sourdough starter) means that the cheese-making room hosts a massive bacteria and yeast population, which helps give the cheese its unique flavours – yeasty, sour-lactic and fresh when young, maturing to become savoury, herbaceous and aniseedy!

A few days later the cheeses are taken to her cave, deep into the mountain.  In this cave the cheese will ‘blue’ naturally, unlike all modern-day blue cheeses to which are added specific strains of blue mould that have been identified to produce a good flavour.  Bleu de Termignon’s blueing just happens, the moulds forming naturally in the cool damp climate of the area.  Sometimes the blue spreads rapidly throughout the entire loose, crumbly paste, other times it spreads less widely:  each wheel is truly different.  There are some who would say that making the cheese this way produces some quite strange flavours, and they’d be right – people nowadays are not used to the wild, strange, complex and interesting flavours produced by a cheese made in this way.  The famous Patrick Rance’s made notes on this cheese in the 1980s stating, “Interesting.  Quite unlike any other cheese.  Needs strong wine.”, and although Catherine may be my favourite cheese-maker, Bleu de Termignon isn’t my favourite cheese…

The way Bleu de Termignon is made can’t be mechanised or made more efficient without affecting the flavour – the rich interesting flavours truly come from years of making the cheese un-intensively, using natural yeasts, moulds and bacteria native to all the wooden equipment and the area, and relying on the perfect unpasteurised milk Catherine’s cows produce.  Bleu de Termignon is truly a product of its ‘terroir’.  That’s why this cheese has never been adopted by bigger producers, nor been ‘industrialised’.  And that’s also why it is dying out. 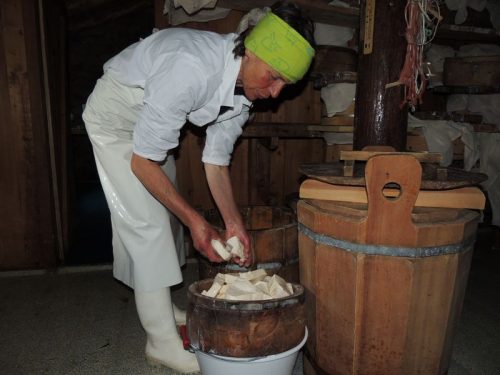 What of the other two producers you ask, will they continue?  Well, one is Catherine’s uncle, Odile, and he’s in his late 80s with only four cows, so he is only making one cheese a day.  The other producer is a larger chalet down the mountain and has modernised production to some extent, so although it still makes ‘Bleu de Termignon’ it is not made in the same ancient style described above.  When Catherine and Odile give up, their traditional style of Bleu de Termignon cheese will be lost forever.  Such a loss would be tragic.

But is Catherine sad?  “No, this is not the way of the modern world now… things must change… I love this life… but I wouldn’t wish it on anyone else…”

As I said my goodbyes and departed, I was really pleased I had visited and seen the cheese being made, but nevertheless feeling a little empty inside.  Enjoy proper Bleu de Termignon while you can.

This is one blog I really struggled to write – I have left so much out that I wanted to tell.  Over the years I have visited hundreds of producers across France, Italy and England and Catherine is the most special.  I 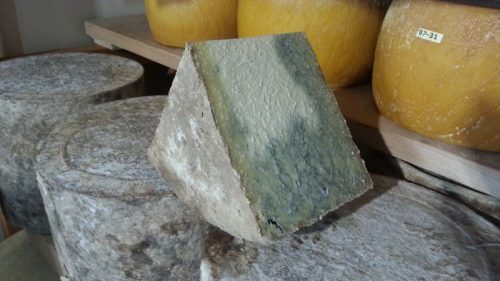 struggled to find the right words to really do her justice – the techniques really are that amazing!  On my visit, I took with me Paul Thomas, of Old Winchester and Little Anne fame, who said, “I really didn’t expect it to be that amazing.  We make farmhouse cheese here in Britain… but nothing like that”.

Because Catherine and Odile make so little cheese we rarely get supplies for the shop.  It is very difficult to get hold of and if we can get it, we generally have it for no longer than one month per year.  Hervé Mons (with whom who I did my ‘affineur’ apprenticeship), with the famous cheese affineur Jaques Vernier, discovered this cheese in the 60s when they were looking for more interesting ‘traditional’ cheeses differing from the mass production which has blighted so many AOC cheeses in France.  Mons now buys the majority of Catherine’s cheese, and you may be able to get it from their stall in Borough Market – but it is very scarce and is out of season for sale from February to October.

The method of manufacture, though unique, has echoes in methodology of a crossover between Mozzarella and Gorgonzola – many ancient texts mention a two-day curd Gorgonzola, and there are also similar recipes throughout that mountain range in France – Persillé de Tignes, Blue de Sainte-Foy, Persillé des Avaris.  Across the mountain passes, the Col du Mont-Cenis, and into Italy, other cheeses developed similarly (Moncenisio / Murianengo / Bressan).  In the French Alps however, the ‘elasticity paste’ cheeses have become more prevalent (Reblochon, Beaufort, etc.) because that process is easier to ‘industrialise’ (and thus make efficiently), so only the cheeses made far from the main roads remain true to the unique, interesting and unusual recipes.  In fact in the winter, when Catherine comes down the mountain to live in the town of Termignon, she sells her milk to the local cooperative to be used to make Beaufort (and also does a bit of Ski instructing!).