~ Order now and choose your own delivery date at checkout ~ FREE delivery when you spend £55 ~
Home Learn About Cheese Producer Visits British Brie made the French way; a visit to Baron Bigod
Show Sub-menu 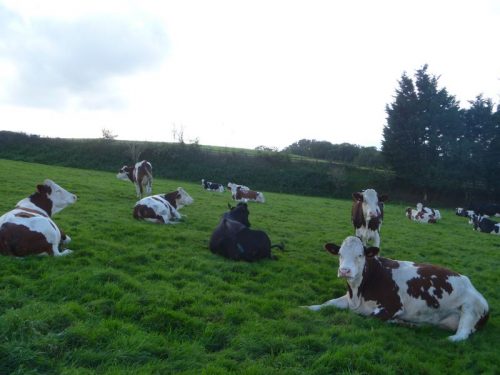 Bungay is a long way from North Yorkshire.  But in the pursuit of good cheese, The Courtyard Dairy’s cheesemongers will travel to the ends of the earth (and even step foot into Lancashire…) so it was with some excitement Andy and Kathy set off to the deepest Suffolk to visit one of Britain’s newest and most promising cheese makers.

Perched on the border between Suffolk and Norfolk, surrounded by The Broads and wet marshland, stands Fen Farm, home to the Crickmore family and their unpasteurised Baron Bigod Brie that is rapidly gaining a well-deserved reputation.

The Crickmore’s have been farming here for three-generations, and started to concentrate on dairy farming in the 1970s.  Like a lot of small dairy farms, however, pressures on the price of milk in the 1990s and early 2000s meant that it was becoming increasingly difficult to remain profitable.

Then Jonny had an idea.  He realised that there didn’t seem to be any fine farmhouse Brie being made in the UK, certainly none that could rival the brilliant French Brie.  Whereas the upsurge in farmhouse cheese-making had seen the creation of brand new unpasteurised Cheddars, goats and sheep’s milk cheeses, there just wasn’t a British Brie of repute.  Indeed, even Neal’s Yard Dairy, stalwarts of British cheese, offered no British alternative to the French Brie de Meaux.

But Britain has a long history of making soft cheese, with York and Cambridge soft cheeses once being famous; it is only in the last 200 years that so many British farmhouse soft cheeses ceased production.  Jonny 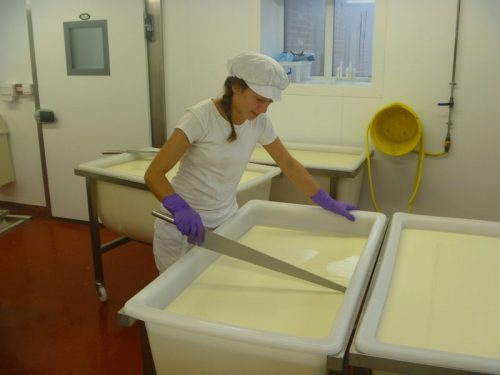 thought it a shame that this expertise had been lost and wondered… could it be recreated?

So in 2009 the Crickmore’s started their cheese research, experimenting and going on some of the best cheese-making courses.  Then they decided to make the jump and, really wanting to concentrate on quality and make the best Brie, they employed a French dairy consultant to help them.  He turned up, took one look at their Holstein Friesian cows, and told them he wasn’t even going to start unless the changed their breed of cow!

Whereas Holstein Friesian, the ‘black and white’ dairy cow widely seen throughout the British countryside, produces good milk, if the Crickmore’s were to produce the best Brie being made in the UK, they were told they’d have to use a cow breed that produced the finest milk to match – that is the important cheese ingredient, after all!  Montbeliarde cows were the breed selected because Montbeliarde was bred specifically for cheese-making – their milk is rich in all the vital elements necessary to make great unpasteurised cheese.  By now Jonny, and his wife, Dulcie, were committed.  So, for a week in France they toured the Jura region, hand-picking 70 Montbeliarde cows to replace their existing Holstein-Friesian herd.  It wasn’t easy – the farms in France are small and the farmers won’t give up their prime cows easily, Jonny and Dulcie had to visit nearly 70 farms to purchase sufficient cows!  Their chosen cows soon arrived back and staggered about Fen Farm; all confused on the Suffolk marshes, before soon acclimatising themselves to their new surroundings. 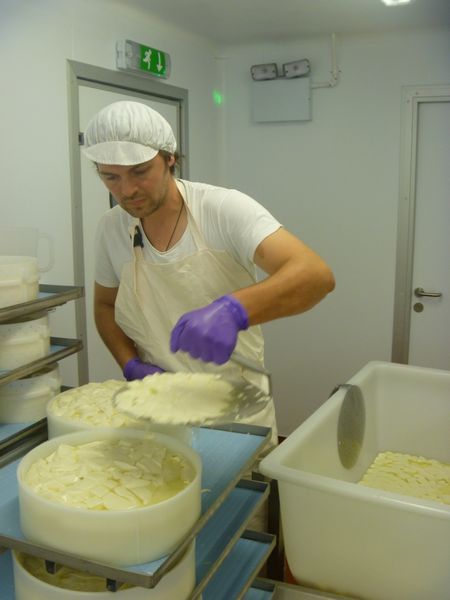 The next stage was to spend a long time building a perfect dairy and developing the cheese recipe until it was exactly right – using their fresh unpasteurised milk every morning, and traditional French bacteria, moulds and yeasts.  They were dedicated… even carrying out the painstakingly long process of hand-ladling the Brie in traditional Brie de Meaux fashion and duplicating its large, bulging, three kilogram form.  It is not an easy recipe to make well, and even harder to perfect, which explains why there may be many Bries, but very few of international repute.

The first few batches of Baron Bigod cheese trickled onto sale in 2012, and The Courtyard Dairy was one of the first adopters, indeed taking the first ever batch to be sold.  Even then it wasn’t quite perfect, but Andy and Kathy of The Courtyard Dairy we were so impressed with the direction and attitude of Jonny and Dulcie, they wanted to support them and their cause so they could continue to improve and develop their cheese until absolutely perfect.  Two years later Baron Bigod Brie is already an outstanding cheese, but even so the Crickmore’s continue to find ways of making it even better.  It’s good enough to rival the very best of French Bries, and it takes pride of place on The Courtyard Dairy’s counter.

Baron Bigod is a farmhouse Brie made as it should be; rich unpasteurised milk from a small herd of cows used fresh to hand-make a slow maturing, velvety rich Brie.  The French are envious. 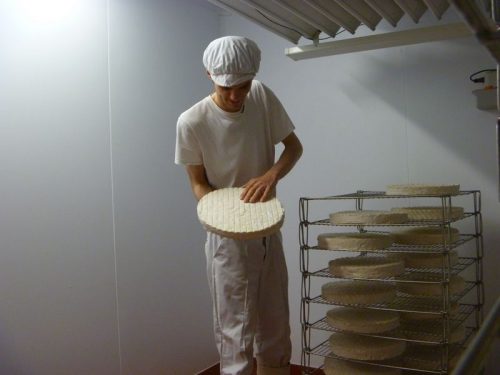 What’s in the name?

For the curious among you, Baron Bigod Brie (pronounced by-god) is named after the local Bigod Earls who came over from Normandy during the Norman Conquest and were given vast estates in East Anglia by William the Conqueror in return for their loyalty, including the land that makes up the Crickmore’s farm.  The Crickmore’s thought it would be a nice tribute to the cheese’s origins (most Bries and Camemberts now come from Normandy) to name it after a Norman Earl who once owned their land!

You can buy the delicious Baron Bigod Brie online here.

Cheese-makers Charlie and Grainne Westhead of Neal’s yard Creamery have shared their brilliant way to cook their Dorstone cheese.

Cheese-maker Jonathan Crickmore of Fen Farm has a favourite way to cook his Baron Bigod Brie.   Read more by clicking the link below.