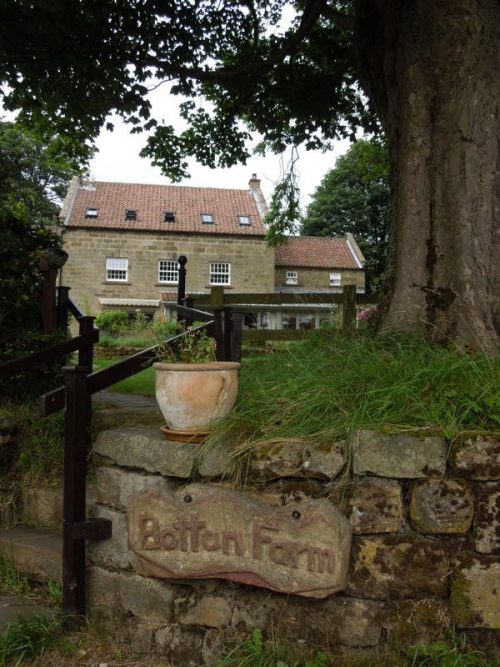 Last month Andy took all the staff out to visit The Courtyard Dairy’s favourite cheesemaker: Botton Village Creamery.  Botton Village’s cheeses are great, and their story is extra special, here is cheesemonger Deb’s story of that very visit:

We met at The Courtyard Dairy at a respectable 6am on Friday in July to set off on another cheesey day out; this time over to the North Yorkshire Moors, not far from Whitby in Danby Dale…

Today we were going to visit Botton Village, which until entering the cheese world back in February I had never heard of.  As we neared our destination we were able to look from the top of the moors, down into the valley where the village nestles, housing five farms in the most beautiful surroundings – wow!

We arrived in the village and were greeted at the creamery by Alastair who is manager, and his recently appointed help Eddie, we scrubbed up and were ready to go: through to the creamery to start our work – cheesemaking for the day.  Already in the vat was 708 litres of unpasteurised milk (2 days milking – they have so little milk they have to save up 2 days worth to make it worthwhile making cheese!).  The milk comes from their 46 Dairy Shorthorn cattle, a traditional breed that yields milk which is rich and yellow and has a good protein to fat ratio; this richness is a plus when the milk is to be used for cheesemaking.  The cattle are milked on two of the villages farms and the milk is transported using a gravity fed tanker (this is instead of pumping the milk which bashes it about and damages the fats therefore leading to a loss in yields).

I forgot to mention earlier due to my excitement on arriving at this amazing and beautiful place, just what makes the village so special.

Botton Village was the first Camphill centre to open in 1954 and is a working community village were approximately 130 adults with learning disabilities and special needs live and carry out tasks alongside volunteers in an environment that prevents any feelings of isolation and also gives opportunities to develop their potential: roles, opportunities and a reason to get out of bed in the morning.  Whether it is farming, baking, woodwork, weaving or many more…. No matter what the role or craft everyone is equally treated and respected.  It was set-up as the founders found that provision and support was lacking for the dependent once they became adults, Botton was created to give adults with learning disabilities a place to live, work, enjoy and belong to as part of a community.

In the cheese store we met the resident Rob who has lived in the village longer than most (since the 70s!).  The Dale End 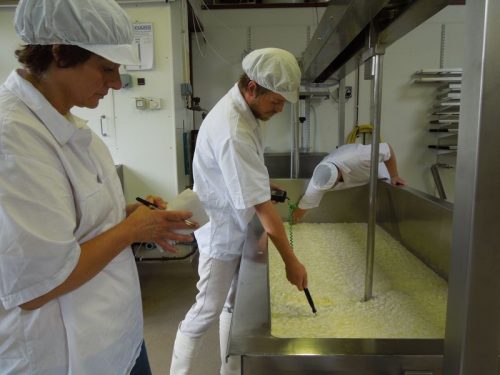 Cheddar, Moorland Tomme, Yorkshire Gouda and Summer Field cheeses are all ripening at a temperature of 11-13 degrees with humidity above 90%.  Rob’s daily job is to wash the clothbound cheeses in a brine solution to help prevent drying out and excess mould developing, repeating it regularly until the Dale End Cheddars go on their journey to The Courtyard Dairy where we age them on to at least 18 months to give that lovely cheddar tang (The Courtyard Dairy takes 90% of the Cheddar they produce).

After spending the morning cutting and stacking curd (read more about the process behind making Dale End Cheddar online here) it was time for lunch.  What other than bread from the bakery, some crackers from the store and cheese.  As well as Dale End we sampled Yorkshire Gouda, a young Gouda aged for approximately three months, which has a light supple and almost creamy texture with a full flavour. Next, Moorland Tomme (Tomme meaning round in French) aged to about 12 months with a texture similar to cheddar and quite a complex grassy flavour; sometimes at the Courtyard Dairy we have Moorland Tomme with a natural blueing, which gives a unique taste.  Last, but not least we were allowed to sample Summerfield, an Alpine style made from the milk of the summer fed cows, it has a lovely sweetness to it.  We took a wheel back to the Courtyard Dairy as a guest cheese – believe me it didn’t last long!  Pudding to me (dessert to other) was the lovely rich, creamy yoghurt straight from the pot and also made in the creamery.

After our 1 hour 20 minute lunch (slightly longer than we’re allowed at the Courtyard Dairy – though Andy may say different) which included a tour around the fantastic walled gardens, growing vegetables for village consumption and flowers to cut and display we were back to it. 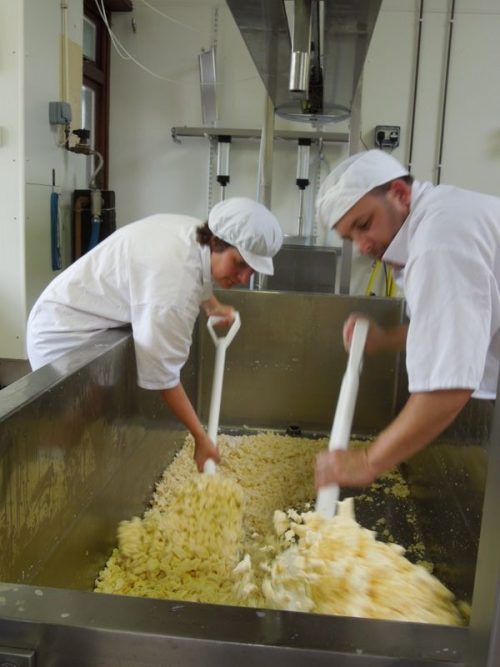 I used a quick break when the whey was being run off the newly formed curd to throw a few questions at Alastair.  He had grown up at Botton and had also farmed here for many years.  He left here many years later and learnt the art of cheesemaking in his German’s wife home country.  There are probably several jobs I’ve missed out here and not sure in what order they come but I do know he returned to manage Botton Creamery about 4 years ago and now produces some fine unpasteurised, organic, vegetarian cheeses.

As the day came to an end, the 708 litres of milk we began with made eight, ten kilo cheddar – just as a point of interest had we made Yorkshire Gouda that day the yield would have been slightly higher as this style of cheese is moister and the process differs (but we will save that for next time…)

Anyway work done for the day with lots of help from three of Botton residents, all was scrubbed down and gleaming ready for the next batch.

Before leaving for home, Alastair took us on a tour to visit the two dairy farms of the village.  We timed it just right to watch the very cows being milked before ambling back to graze on the organic, biodynamic land of Botton.

As we walked through one of the buildings that houses the cattle over winter I noticed some string bags hanging from the beams with what to me looked like some form of root vegetable, on asking what they where we were told “cow horns” (so don’t come to mine for dinner!).  On making further enquires we learnt that as part of a biodynamic farming practice (biodynamic I have since learnt is sometimes referred to as the Rolls Royce of organic) the horns are filled with cow manure and buried in the ground in autumn, having decomposed over the winter the horns are dug up and the manure removed and mixed with water before being spread back on the land, biodynamic farmers also work with the phases of the moon and planets. When they set-up in the 50s, other farmers in the dale were dubious of “their voodoo stuff” but now people from far and wide come and see their techniques and study their rich interesting pasture and sustainable method of farming.

Well, whatever techniques are used in the village for the animals and crops, pretty much all the fodder is produced on site and Botton also has a seed farm where they keep alive and populate rare varieties of 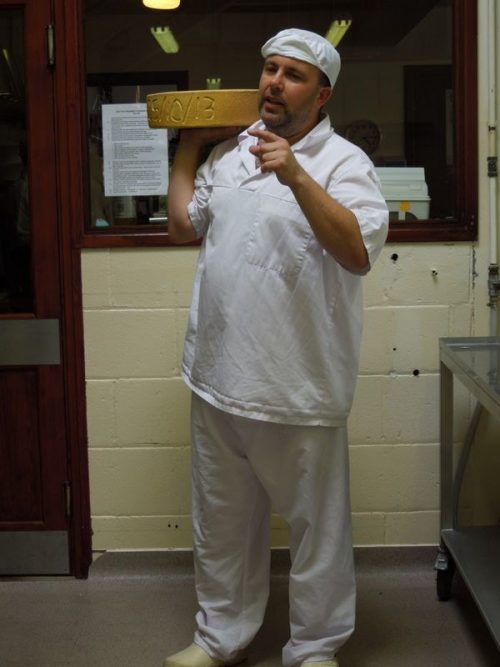 vegetables and fruits.  The farm works well – all are happy, healthy and content, maybe I’ll bury some horns this autumn!

Time to say goodbye and a huge thank you to Alastair, Eddie and all at Botton village for allowing us to work alongside you and see how they make their amazing tangy Dale End Cheddars (which by the way were recently featured on Paul Hollywoods pies and puds).  It’s been a fantastic day.  We’ve learnt even more about the art of cheese making and absorbed lots of cheesy knowledge.  If you ever get the chance to visit this wonderful place you’ll see just what I mean.

If you are interested in Botton Village and The Camphill Village Trust and the brilliant things they do, you can read about it (and donate) more on their homepage: www.camphillvillagetrust.org.uk.  There is also an opportunity to visit for one of their open days several times a year (listed on their website).

Winner of Cheesemonger of the Year (Farm Shop & Deli Awards 2016)

A perfect cheese, potato and onion pie as made by Paul Hollywood on his Pies & Puds series (BBC 1).  Featuring Dale End Cheddar made by Botton Creamery the rich…