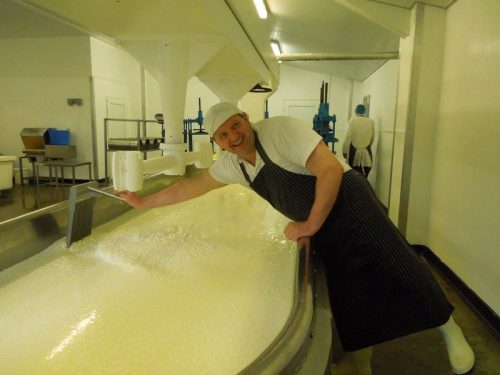 The morning of Thursday 17th April had finally arrived.  My colleague, Pam, and I, were being taken on an amazing educational “day out” by Andy and Kathy, owners of award-winning The Courtyard Dairy, together with the other main member of their cheese team, baby Mary.

Pam and I joined Andy and Kathy at The Courtyard Dairy in February, and prior to that we had no more cheese knowledge than the average housewife!  So, as part of our intensive training, we were going to see how Mrs Kirkham’s Lancashire Cheese is made.  The Kirkhams are the only-remaining makers of unpasteurised Farmhouse Lancashire Cheese in the world.

Arriving at Beesley Farm in Goosnargh, near Preston, we were greeted by Fiona who organises everything.  White wellies, coats and stunning blue hairnets were donned and hands well washed before we were taken through to the cheese-making dairy… through the footbath: we began to realise that this wasn’t a “day out” as such, but a hands-on, get-stuck-in day… as Andy said “you didn’t think you were getting paid for doing nothing, did you?”

We were introduced to two young twin sisters from a local farm, who were going to show us how the cheese-making magic happens.  We’d arrived slightly after their working day starts (well, actually about 3-4 hours after!), so the morning’s milk from the 100-strong Holstein Friesian herd was already in the vat.  The starter culture (which provides acidification, changing the milk’s lactose into lactic acid and triggering coagulation of the milk into curds) and rennet (which causes the proteins in the milk to form a curd whilst the liquid separates and runs off as whey) had already been added.  The cheese-making process for Kirkham’s Lancashire had begun and the milk was heated to 31 degrees Celsius.

Very soon we were getting immersed, and as the curd set we were taken through to the buttering-up area to get even more involved!  Here we meet Graham, third generation cheese-maker and son of the famous Mrs Kirkham.  Considering we were about to be let loose amongst his fine cheeses, he was extremely friendly and welcoming.

Buttering-up involves the smoothing out of any wrinkles in the cloth that already binds the cheeses that have sat drying on shelves for several days, followed by liberal application of melted butter to the top and sides 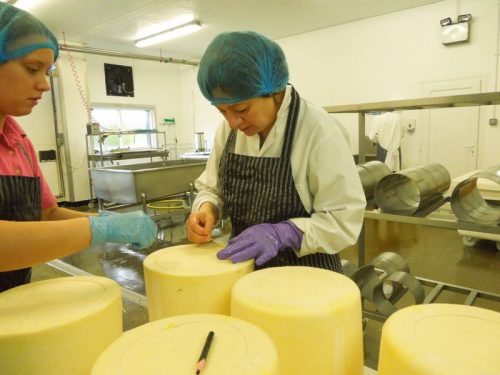 of each cheese.  Most cheeses nowadays are either vacuum packed or waxed, but the ancient method used for Kirkham’s Lancashire of binding in cloth and coating with butter allows their cheeses to breathe and mature whilst maintaining flavour and texture – producing a finer cheese!

The Lancashire cheeses aren’t exactly light in weight: each truckle weighs either 10kg or 20kg (the larger size being made only for The Courtyard Dairy and one other outlet).  The girls certainly earn their money, and I don’t think they’ll ever need to join a gym!  Having finished the final stage, it was back to the dairy where we admire that way that Graham Kirkham stirred the curds.

The curd was not yet fully set, so we got on with the next job: knocking out the previous day’s Lancashire cheeses from the moulds, tightening and knotting the cloths, then marking each one with the date, before moving to the buttering-up room for a little rest.  It’s the cheeses that rest, of course, not us!

The next job for us was to help with the milling together of two batches of curd.  Mrs Kirkham’s Lancashire is made with a two-day curd method, using half the curd from yesterday’s milk and half from the day before; this helps to give a light fluffy texture, essential in traditionally ‘creamy’ Lancashire. 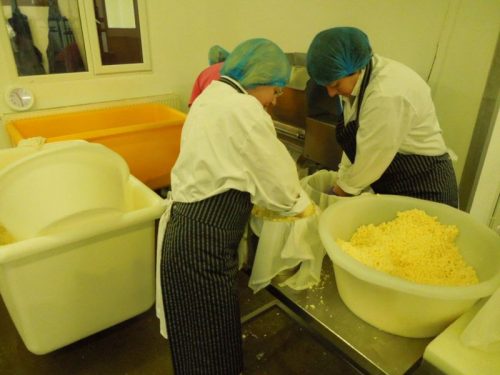 Salt is added during the milling, then the set curds are transferred into cloth-lined moulds and gently but firmly pressed down, with knuckles rather than the palm (the palm of the hand is too warm).  The cloth is stretched over the top, each mould lid popped on, and the moulds are placed onto the presses.  Mrs Kirkham keeps a close eye on the presses and would be screwing them down tighter later on.

Back to the vat and the curds which were now ready for cutting and lifting to allow the whey to run off, a delicate process carried out carefully by hand: the curds mustn’t be handled roughly because this can affect the texture of the cheese, possibly making it too dry.  The curds were continuously scooped from the sides and placed on top of the ones in the centre, until the majority of the whey had drained off.

Brandishing a large knife, Graham then cut through the curds so they could be hand lifted and restacked.  After a while the curds felt almost silky to the touch, at which point they were moved gently over to a large muslin-lined shallow bath.  In this bath they were broken slightly smaller, covered by cloth, then hydraulically pressed under two large metal panels to remove any further whey.

At this point I was more than happy to hear the words “dinner time”.  It was now approximately 1.30pm and I was starving and in serious need of a cuppa (we’d probably have had at least four by lunchtime at The Courtyard Dairy if only to keep us thawed out!)  So, hands washed, foot-bathed and out of the cheese making gear, we were taken across to the farmhouse to be fed and watered by Mr and Mrs Kirkham (John and Ruth)… and what an amazing feast we had.  After having eaten far more than was needed, I couldn’t resist Mrs Kirkham’s quiche, which was to die for.  A mid afternoon nap would then have been perfect, but… white wellies, coats on, you know the rest, and it was back to the dairy where we repeated the process on the curds, breaking and repressing.  Leaving the twin sisters to finish the work in the dairy, we moved to the ageing room for some cheese tasting illustrating how the tastes and textures vary from batch to batch and at different ages of maturity.  Kirkham’s Lancashire is aged for 3-6 months (creamy Lancashire up to 12 weeks and tasty Lancashire over 12 weeks).  All the cheeses tasted amazing.

The 20kg truckles of Mrs Kirkham’s Lancashire cheese take longer to mature, producing a longer lasting flavour.  Which is how we like it at The Courtyard Dairy.  The outstanding-tasting cheeses selected by Andy 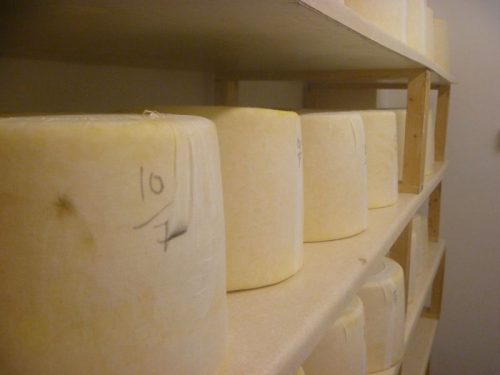 and Graham for The Courtyard Dairy were loaded into the van and soon we were off back to Settle.  Our extremely interesting cheesy day was over.

So Pam and I offer heartfelt thanks to everyone at Kirkham’s for allowing us to work with them and teaching us the art of cheese-making the Kirkham way – it was a fantastic day.  And thank you to Andy, Kathy and Mary for our exciting “day out”.  I can’t wait for the next one.