~ Order now and choose your own delivery date at checkout ~ FREE delivery when you spend £55 ~
Home Learn About Cheese Producer Visits Farmer, ice-cream maker and cheese producer – read about a visit to Doddington Dairy to meet real pioneers of cheese making and farm diversification…
Show Sub-menu

Farmer, ice-cream maker and cheese producer – read about a visit to Doddington Dairy to meet real pioneers of cheese making and farm diversification… 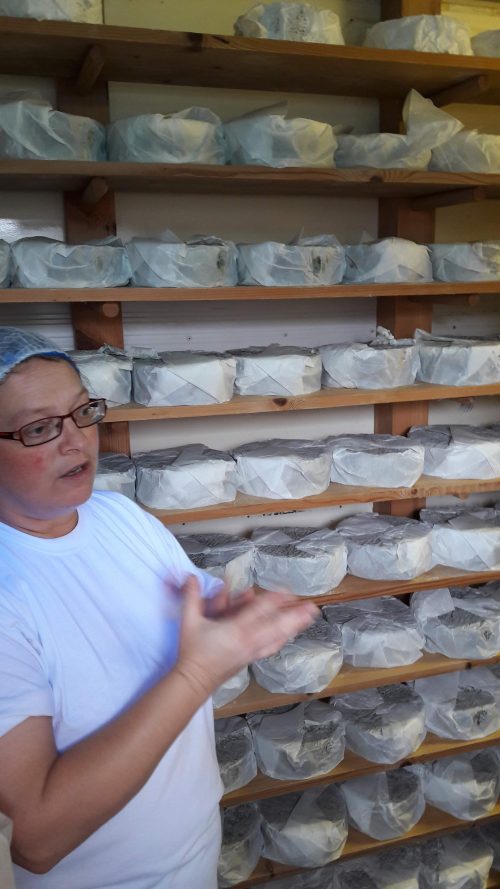 Nestled on the border between England and Scotland, Doddington Farm is almost as far north in England as you can get. And allegiances up here are mixed; indeed the Maxwell family, who run the farm) only started farming at Doddington in the 1950s when they moved their whole farm and dairy herd down from Scotland’s wet west coast in search of drier and better farmland.
Taking on a tenancy from the British Admiralty, the Maxwells secured a large area to farm, encompassing the small village of Doddington in Northumberland, just south of Berwick on Tweed, and set about establishing their successful dairy farm.

But the 1980s saw many changes in farming and the introduction of milk quotas started the Maxwells thinking about how to diversify to keep their farm viable. Diversification would help to provide jobs for all the family, as by this time the next generation of the family were running the farm, with brothers Bob and John tending to the animals, arable land and milking the cows (a hodgepodge mix of Montbelliard, Holstein, Friesian, Swedish Red and Normandy breeds that give a diverse milk – interestingly the different breeds seem to stick together in groups out in the fields!) 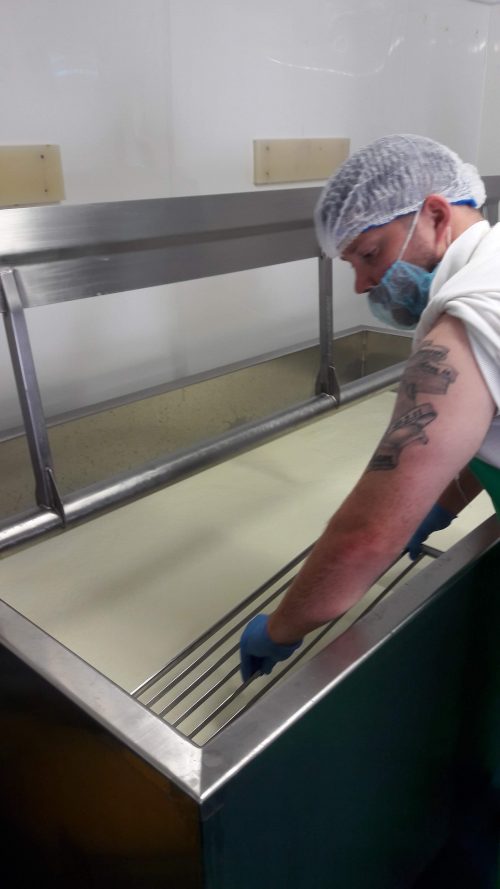 Brother Neill (with his wife Jackie) decided to use some of this fresh, warm milk to make a range of ice creams, for which they’ve become famous. And fabulous they are too – only made using fresh homemade natural bases, they have real flavour. Last but not least, sister Margaret Ann (‘Maggie’), inspired by a Young Farmers visit to Isle of Mull Cheddar makers, decided to have a crack at cheese making, starting with an experimental 250 litre vat and a hastily put together room.

The first cheese Maggie and Neil developed was Berwick Edge.  Not being able to source small-farm cheesemaking equipment in the UK (it had all pretty-much died out); they turned to the Netherlands where farm cheesemaking was still going strong – and they had a strong links to that area thanks to the nearby ferry services from Northumberland to Amsterdam.  Sourcing bacteria, equipment and rennet – Berwick Edge was born – based on aged Goudas they had seen being produced when they’d visited the Netherlands to source equipment and get ideas.

Nowadays cheese is made five days a week, using 2,000 litres of warm raw milk straight after the morning milking (the milk taken from the fittest and best cows that are first into the milking parlour). Now in a purpose built cheese-room, a range of cheeses are made. Doddington cheese is Maggie’s most famous creation, evolving from a Leicester recipe, which has become more ‘Cheddaresque’ over time and is now aged for 18 months or more to give it real bite.

Other cheeses soon joined the range, including the Admiral Collingwood (semi-firm, washed in Newcastle Brown Ale), Cuddy’s Cave (supple Dales-style cheese). Most recently Maggie’s nephew James has also joined the family business and makes their newest creations – Darling Blue, a firm blue with a rich biscuit flavour, and Capability Brown – the same cheese but without the blueing!

A true supporter of local enterprise, most of the Doddington cheese and ice-cream production stays within Northumberland and southern Scotland, with a fair bit sold though their own ‘Milk Bar’ in nearby Wooler. This quaint, small American-themed milk and ice cream bar has been supplying the town since the 1930s, and is an institution in Wooler which the Maxwell family were proud to take over in 2016.

The successful Doddington farm truly is a family affair, which, across their vibrant enterprises, provides 30 local jobs in their remote rural area – all just from one farm. That’s pretty impressive.

What are the crunchy crystals found in hard cheese?

Well, if you thought it was salt, you’d be wrong! We do know what causes the crystalline white deposits found within hard cheeses. It isn’t common salt, and in fact…