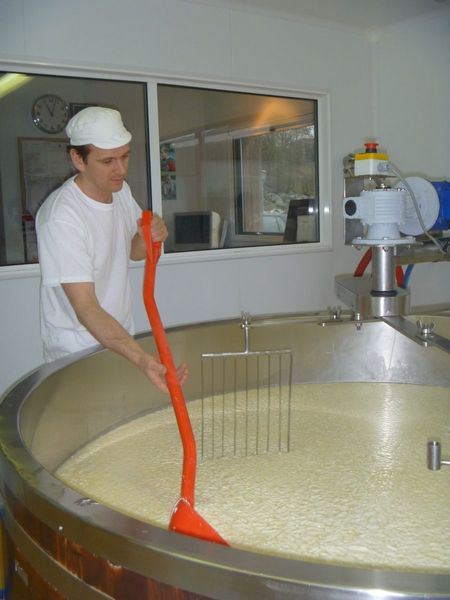 Two years ago I visited Holden Farm Dairy and reported some very exciting things that Sam and Rachel Holden were experimenting with:  “I can’t wait to try some of his experimental Hafod cheeses when they are fully matured.  At 3 months old they were already tasting brilliant – buttery, rich and warm.” (click here to read the full article).

At the time Hafod cheese was very good Cheddar made using quite commercial starter bacteria, a fairly standard Cheddar recipe and plasticoting the rind (a thin layer of breathable plastic that allows a natural rind to form).

Yet their new ‘experimental’ Hafod cheeses were made in an ultra-traditional way like no other Cheddar currently was in the UK, following an ancient recipe found in an out-of-date, out-of-print book.  And, as mentioned above, even at an early stage the results were promising.

So how did these experiments turn out?

In a word… amazing!

When Kathy and I set-up The Courtyard Dairy in December 2012 we asked Sam and Rachel Holden about those experimental Hafod Cheddars, and how they were getting on.  Well, we tasted a little, and we were so impressed we decided to list it as our main Cheddar, rather than the delights and amazing depths of the traditional West-Country makers such as Keen’s, Westcombe and Montgomery.

So what had changed in the few years since we visited?

Well, Sam and Rachel had moved all their production over to this ‘new’ make of Cheddar.  Using Dora 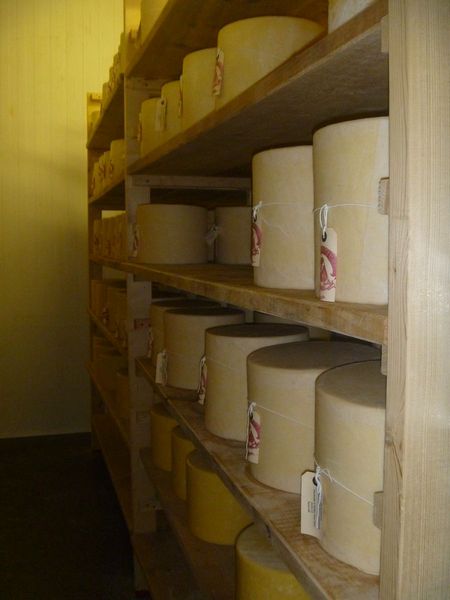 Saker’s ancient book they now make Hafod Cheddar at a very slow speed, with minimal amounts of starter bacteria (used to acidify the milk during cheese making), and (for all you technical folk) it has slowed down even more since we visited, now having a very long and slow acidification and even higher pH at moulding.  The long, slow acidification and high pH has meant their brilliant Ayrshire milk has all the time it needs to express itself.  The whole process of cheese making is done slowly at the Holden’s farm, making for less tangy full-on acid flavours and a more buttery ‘warm’ Cheddar.  The Hafod Cheddar cheeses we have in stock at The Courtyard Dairy are no exception.  Not ‘smack you round the face’ Cheddar – but Cheddar with a long complex depth of flavour, rounded with an occasional and interesting natural blueing in parts (the flavour of which we love – read more about that here). 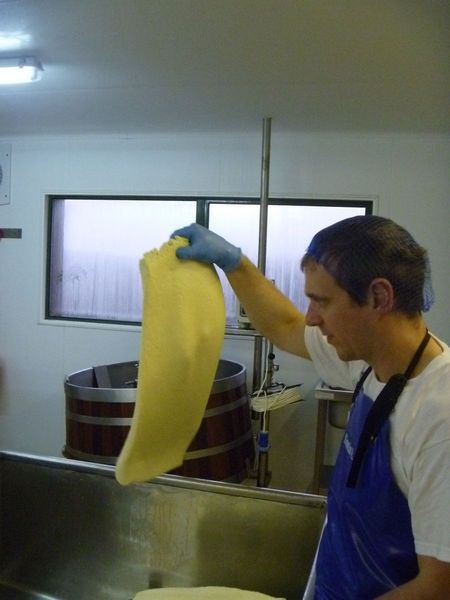 On top of this, to improve their cheddar all Hafod Cheddar is now cloth bound with a single layer of cloth and minimal larding (used to hold the cloth on) which allows their cheese to breathe and expel moisture better.  They are also about to start hand-cutting the curd (the only part of their process which was still done automatically) which will hopefully result in a gentler, smoother cut and therefore better cheese.  There’s also a rumour that they will be making a few special big 25kg (56 pounders!) cheeses on the odd occasion in the future (their current Hafod Cheddars weigh 10kg each).

The Holdens have also just purchased a bigger vat in order to make a little more Hafod Cheddar when they have a glut of milk at certain peak periods.   This second-hand vat was previously used by the late Mrs Montgomery, which Sam and Rachel feel has a certain aptness – when Mrs Montgomery saw pictures of the long leathery curd that Sam and Rachel are aiming for in their ultra-traditional recipe, she is reported to have remarked “that was how it was”. 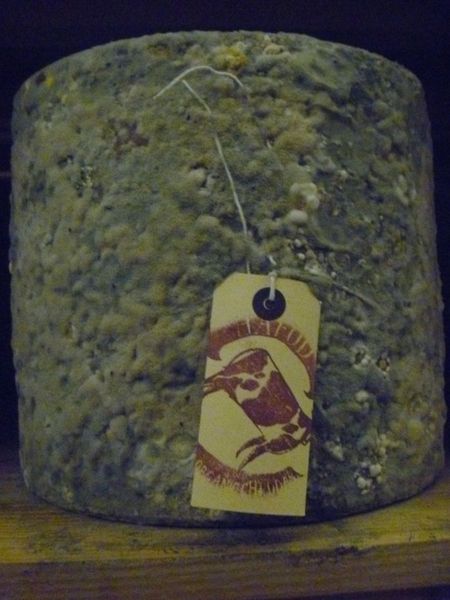 reasons they have lost almost a third of their cows, which has meant they have had to purchase more (for 35 year up until then they had a closed herd of Ayrshire cattle; ‘closed’ meaning they hadn’t purchased cows but had maintained their herd by breeding from within) and they have also been required to pasteurise their milk.  Their intention is to return to making cheese with unpasteurised milk as soon as is possible (all being well, by the end of February this will be realised, which will mean unpasteurised Hafod Cheddar will start to come through in early 2015).

Quality wise, fear not – Sam and Rachel’s ambition remains to make the best Cheddar in the UK, which, coupled with their determination continually to improve the quality of their cheese, has meant that their delectable Hafod Cheddar only seems to get better.  Kathy and I are proud to have it on the counter at The Courtyard Dairy.