How Dale End Cheddar is made 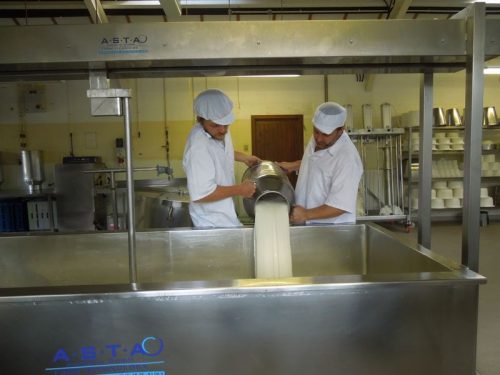 Last month cheesemonger Deb went off to visit The Courtyard Dairy’s favourite cheesemaker: Botton Village Creamery.  Their cheeses are great, and the story of their farm is extra special – read about Deb’s account of it here or you can buy Dale End Cheddar here.

For those cheesy geeks below is Deb’s account of the how they made the Dale End Cheddar that day read on below.

We arrived with the 708l of rich unpasteurised Dairy Shorthorn milk, direct from the Botton Village farms.  The milk was then heated in the vat to 26 degrees using a hot water system and stirred gently, at this temperature the starter cultures (which cause acidification and change the milks lactose into lactic acid and then triggering the coagulation of the milk into curds) are added, stirring continues until the milk reaches 31 degrees.  The heat and stirrer are turned off, 50 minutes after the addition of the cultures, the vegetarian rennet is added and stirred thus causing the proteins in the milk to form a curd and the liquids to separate and run off as whey. 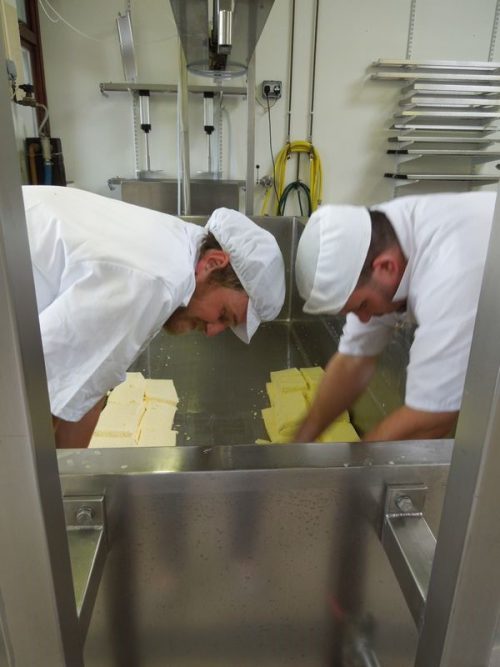 Doesn’t time fly?  Back at the vat where the curd is now set and time noted, the first cutting is done using a cheese harp.  After three minutes of cutting vertically the length of the vat a second cutting is done horizontally to make the curd smaller, small enough to make a dry cheese to be aged – as more moisture is lost.
It is now stirred for one hour ten minutes (from the first cutting) and slowly heated to 38 degrees.  When the curds and whey reach 37 degrees the heat is turned off but stirring is continued to the end of the set time even if the temperature has reached 38 degrees.  Then the stirrer is removed and the curd left to settle. 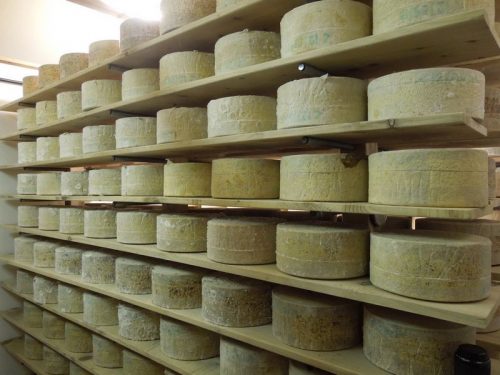 The vat was then gently tilted using air pressure, to assist in the draining of whey which took about 15 minutes, we then had 25 minutes before the cheddaring process began (this gives the cheddar snap texture).  Using a huge knife the curd was cut into blocks and stacked.  This was repeated 4 times leaving 15 minutes between each cutting.

The P.H levels (acidity test) and the L.A levels (lactic acid) are tested at each cut of the blocks of curd.  As the P.H levels decrease the L.A levels rise as it becomes more acidic, these levels are also tested at the start of the cheesemaking and again when the rennet is added.  To speed up acidification the blocks of curd should be stacked close together, higher and spaced apart to slow it down.  When the desired acditiy is reached the curd is milled back into the vat and salt is added.  The salted curds are then shovelled and shaken and spread out to rest for half an hour as they need to be cool when pressed or you run the risk of pressing the butter out.

The cheese moulds are lined with muslin and we then filled and gently pressed the curd in before taking them to the press, slowly increasing the pressure.

At this point that next morning the cheeses are taken out and turned over, then back in the moulds and pressed over lunch.  Then the Dale End Cheddars are taken out of the moulds and scalded at 70 degrees for one minute, this helps to produce a more even rind on the cheese.  They are cloth bound and re-pressed.  On the 3rd day they are removed from the moulds weighed and dated before being placed in the cheese ripening store to await the time they begin their travels to The Courtyard Dairy to continue ageing to perfection at around 18 months.

Read the full details behind the brilliant Botton Village here.

A perfect cheese, potato and onion pie as made by Paul Hollywood on his Pies & Puds series (BBC 1).  Featuring Dale End Cheddar made by Botton Creamery the rich…