How to make … Anster – a cheesemongers visit to the farm 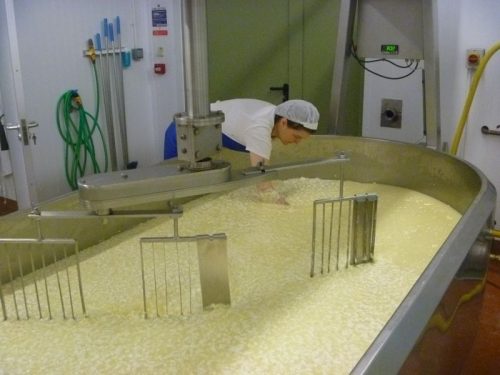 I used to tell customers that Jane Stewart was one of the most glamorous ladies in cheese, and probably pottered around the ‘cheese make-room’ in heels, so it was no surprise on this wet and windy Tuesday morning that Jane greeted me with me a quick rebuff for being early, before she darted away to finish getting ready to spend the day making one Scotland’s most recent additions to the cheese world: Anster.

(Which is not the only award-winning thing round there, as the nearest centre of civilization – the picturesque fishing village of Anstruther – is famous for its award winning chippies.)

The Stewarts have been dairy farmers on the flat, windswept Fife coastland since the 1930s, when every farm around was milking cows.  It’s not the same today: the increasing pressures of being a dairy farmer nowadays

mean that only 20 dairy farmers remain in Fife.  Not wanting to leave dairying, the Stewarts, like many other dairy farmers around the UK, had to find a way to make their dairy farm remain sustainable.

Making cheese sounded attractive – there was a demand for good local food, a good tourist season and lots of farmers markets, and 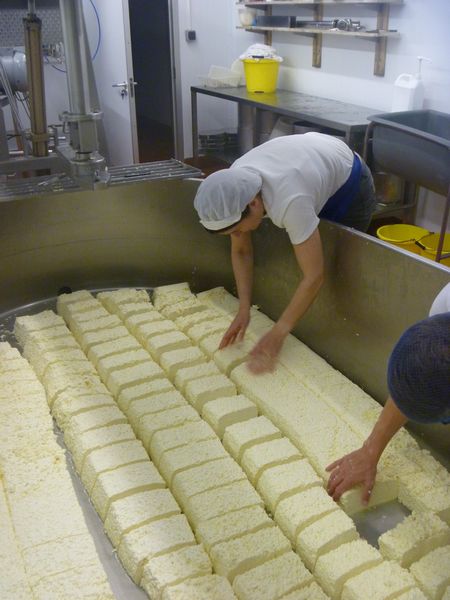 there was no one else making cheese in Fife – so why not?  But first Jane needed to learn to make cheese.  Enquiring about a video on cheese-making that was available, Jane, thinking she was ringing up the distributors of the video, found herself speaking directly to award-winning cheese-maker Leon Downey, and after going round the houses several times, he told her to get herself down to Pembrokeshire as he was retiring anyhow, and she could learn firsthand off him.  [The video is now available on YouTube: https://www.youtube.com/watch?v=LwQNsF-azqA]

Leon Downey was already a legend in the farmhouse cheese industry; his cheese, Llangloffan, graced the counters of the finest cheese shops of the 1980s and ’90s – from Patrick Rance’s Wells Stores to Neal’s Yard Dairy.  He was the first man to revive farmhouse cheese making in Wales.  Leon had originally studied at the Royal academy of Music, becoming for 15-years the principal viola player for the Hallé Orchestra.  But in 1977, he decided he wanted a change.  So, armed with a book, a bucket and a cow, he moved with his wife and children to rural Pembrokeshire and taught himself how to make cheese.   Llangloffan, following a similar recipe to Cheshire but a touch creamier, developed over time as Leon, a true perfectionist who really understands how to make proper cheese using traditional ‘pint-pot’ starter bacteria, natural rennet and hand-made techniques of old, refined his technique.  He taught these methods, along with his attitude towards cheese-making, to Jane.  And when Leon  Downey retired from making cheese in 2005 it seemed fitting that Jane should continue his legacy.

Returning north with his recipe and attitude, Jane and Robert set about creating somewhere to make cheese.  With no spare barns or room on the farm, they decided to build a brand new centre for making cheese next door to the farm.  But since they were creating something from scratch, they thought they might as well add an attached cafe as well, something they would probably not have done if they simply utilised an existing building on the farm.  The cafe is a resounding success and employs full-time chefs and waiters who make everything from scratch; it’s well worth calling in for a coffee or something more substantial if you are in the area.

Shortly after, in 2008, the cheese making began in earnest, using fresh, unpasteurised milk direct from the farm’s 200 cows.  The cattle, a closed herd of Holstein Friesians crossed with a Limousin Bull so that Bulls calves are in fact useful and not wasted, is at pasture as much as possible.  The shedding for the cattle is also top of the range, with mattresses and waste shredded paper bedding for the best quality housing.  It’s no surprise that first-class milk is the starting point for making Jane’s cheeses.

Anster is made in a classic Cheshire way, fast and aggressively-acidified to drain the whey out – a twist on the Llangloffan recipe.  Jane also uses the difficult ‘pint-pot’ bacteria cultures traditional to Cheshire (of which at The Courtyard Dairy we have a particular one we prefer and which we think makes the best quality Anster – lemony, fresh and zesty; believe it or not it was Leon Downey’s favourite starter to use, too!)  Made into a 10kg truckle and pressed in old cast-iron presses screwed by hand, the cheese is then matured for three to five months.  Jane’s cheese store has its own unique qualities too – helping the mound rind to grow slowly on the outside of the cheese before naturally flaking off and leaving the beautiful, paper-thin, grey rind classic to Anster.  I never seen it before – it’s unique to Falside Farm – and Jane likes it so much she dare not make changes to the store!

Fresh and zesty Anster is a perfect alternative to a traditional crumbly cheese (Lancashire, Cheshire, Wensleydale) and will grace any ploughman’s lunch.

And if you want to know why it’s called Anster, well it’s simply that a native from the local fishing village of Anstruther is locally called an ‘Anster’ (pronounced ‘Ain-ster’). 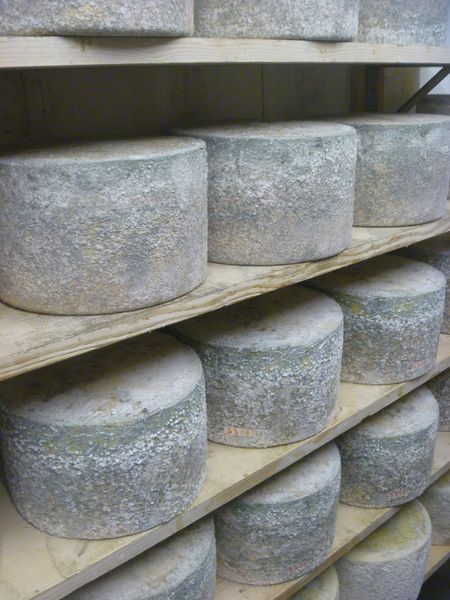 Over time, Jane also developed two other cheeses:Red Anster, made with Garlic and Chive, was added to the fold because when she was selling at farmers’ markets, her customers used to ask her “Is that all you make?”  So she quickly developed this flavoured cheese to add to her range.  It’s made using the same recipe but with the addition of herbs and garlic.  St Andrew’s Cheddar.  Jane has been developing this Cheddar over the last few years: I’ve tasted it in the store and it is definitely one to watch.  Jane is using traditional Cheddar methodology, traditional barber cultures and cloth-binding like all the best Cheddar makers.  She’s completely self-taught with this recipe, and St Andrew’s Cheddar continues to improve every year!

Part time Cheese Monger and Affineur trainee Joe Lodge visits Holden farm, makers of Hafod Cheddar, to find out about Sam and Rachel’s quest for the perfect cheese and their dedication…

Andy visits Appleby’s of Hawkstone; the last remaining producer of unpasteurised traditional cloth bound Cheshire, find out what makes their cheese special and how they got into making this mighty-fine cheese.