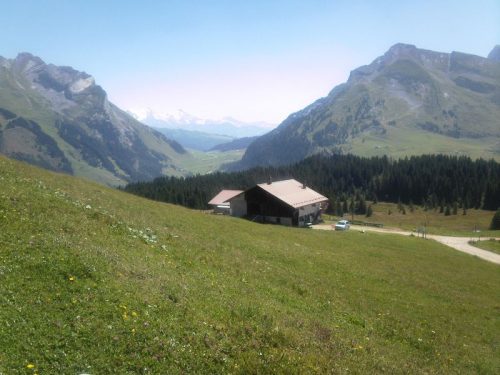 Reblochon is a very ancient cheese (13th century), but not well-known for many years, and is still not that famous within the UK. Its availability and popularity comes and goes with the occasional celebrity chef’s recipes, but it is rarely, if ever, found on a cheeseboard, even in France. One of the reasons could perhaps be because the majority (80%) is made in creameries rather than on a farm (fermier) – although this has the same velvety texture, the flavour is often plain, un-complex and rather like milk (it has a short coagulation time and affinage, so relies heavily on the rich milk flavours). Even with the fermier cheeses (discernible by the green casein plaque and green label on the packaging) it is still hard to find a magnificent one outside Savoie – the Savoyards like to keep them for themselves!

For many years Reblochon was in fact kept a secret. When the tax stewards came to measure each farms yield and determine the tax to be paid, the farmers used only to partly milk their cows on the day. The resulting withheld milk (which also happens to be richer) would then be milked from the cow and transformed into a cheese – ‘lait de reblocher’ means ‘withheld milk”. This cheese-making had to be fast – hence the fabrication immediately after milking, heavy use of rennet, short coagulation time and quick ripening by washing and ageing at a high temperature.

Those that know Reblochon often know it because of the French dish – Tartiflette. And it isn’t often that Reblochon is mentioned 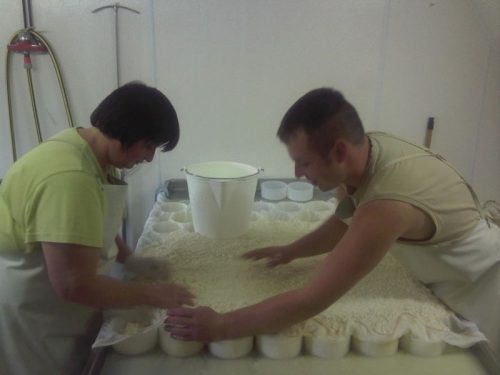 without Tartiflette cropping up in the same sentence. In fact Tartiflette was invented only recently (in the eighties) by the Syndicat Interprofessionnel du Reblochon in order to sell and popularise Reblochon. Yet this was a double-edged sword – the reputation of Reblochon runs now alongside the dish and the cheese is rarely recognised on its own for the quality, smooth, unctuous beast it can be. So in 2012 I went to find that cheese; Reblochon at it’s best.

Setting off from Thones, I headed up into the mountains of Aravis. At 1300m, I thought I had got high enough and I saw a sign for a farm that made Reblochon, so popped in. No one was around. I asked a neighbour if they made cheese there. He looked at me gone out. In the summer? Of course not – go higher! So half an hour of winding roads later I reached the Col de la Croix Fry. From there it was on foot up winding mountain trails till I reached the Plateau de Beauregard. At last, here they were: farms a plenty, cows in the pasture with their bells dinging and donging, playing the tune of the mountains. Let the tasting begin! Several farms and Reblochons later I was just about to give up (they were great, but not that great). Then – bang! I found it! That flavour, texture and smell I was looking for. Now to quiz the makers: production techniques, sales and, most importantly, affinage. 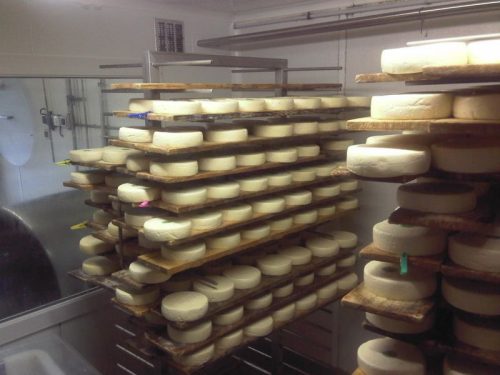 But when it came to how they aged their cheese the same name cropped up – Paccard of Manigod. Well it just so happened their 20th anniversary of being affineurs of Reblochon was that night, so I squeezed my way in to the celebrations.

And what a night. We started by tasting each of the products from each of the farms Paccard work with (17 Reblochons anyone?) – an amazing array of different distinct flavours. The quality was fantastic in every one, although of course I naturally had my favourites. And yes, they know how to affine the others too: their Beaufort, Chevrotin, Abondance, Bleu de Termingnon and Tommes were equally fantastic.

Then the celebration meal: if you could write a list of who’s who in affinage and top quality cheese, they were there – Bernard Anthony, Van Tricht, Androuet; as 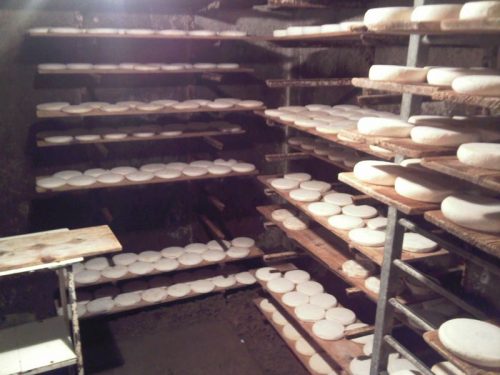 well as the twenty-odd farms that Paccard work with. Jean-Francois, one of the family, very kindly invited me up into the mountains early the next day to watch the milking and production of Reblochon and Abondance, before giving me a tour and explaining their process of affinage for all of their products – very complex – various rooms, moving, washing, temperatures, wrapping and of course – the art of just knowing by the way it looks and feels, soemthing that takes a long time to perfect.

As Joseph Paccard said in his speech at the end of the night: Reblochon is a cheese that should not only be famous for Tartiflette – it should be on the best cheeseboards in France. And after tasting his – I have to agree: his Reblochon is ‘Top!’

Find out more fascinating facts about cheese and about this blog when it’s published – simply sign up to The Courtyard Dairy monthly newsletter for regular  exciting offers and interesting info. from the cheese-world.  Sign up here.