~ Order now and choose your own delivery date at checkout ~ FREE delivery when you spend £55 ~
Home Learn About Cheese Producer Visits Keen for Cheddar? A visit to Keen’s Cheddar at Wincanton, Somerset
Show Sub-menu 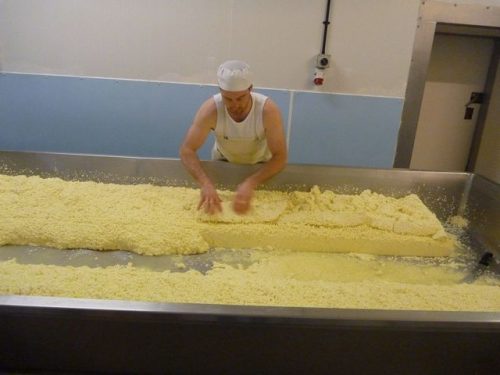 5 generations of cheese-making later, the current cheese-maker, James Keen, can certainly call on a wealth of experience, with the family firm being one of the three remaining traditional Cheddar producers in Somerset.  400 years ago, Thomas Fuller said, “Their worst fault is that they are so few”.  In the dark days of British cheese-making, only the Keen and Montgomery families stood firm, but since 2001 Westcombe Dairy have returned to the fold and turned their back on the mass-produced block Cheddar that fills most of our supermarket shelves and our mouths.

But the traditional unpasteurised Cheddar is a completely different animal from the mass-produced; with its long, complex, fruity, tangy and savoury flavour it seems like a different product altogether.

Cheddar is synonymous with Somerset, as its recipe developed in that county over hundreds of years.  At first it was made on farms in the county, later being matured and sold in the town of Cheddar and the Cheddar Gorges.  Passers by and tourists soon started to request “the cheese from Cheddar”.  Yet now Cheddar is produced in greater quantities than any other cheese  in the world, and almost none of it is made in Somerset!

Keen’s Moorhayes Farm lies deep in the Blackmore Vale, in the heartland of Somerset.  It’s here where the magic happens and milk takes it’s leap towards immortality.  Each day the local milk is sent straight from the cows into the vat.  The Keens have a mixed herd of 250 cows, Friesian, Red’s, Swiss Brown and Ayrshire; its this variety that adds different characters to the milk. 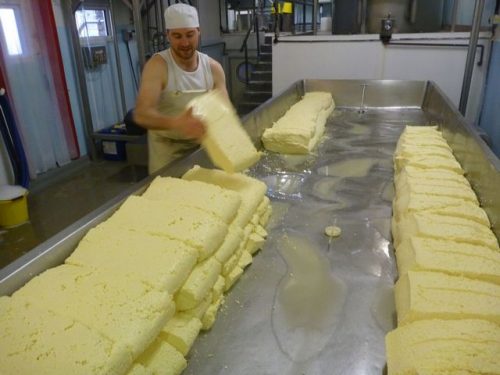 In the cheese-making parlour James Keen (under the watchful eye of his Dad, George) adds the premixed ‘pint pot’* starter, the rennet, and allows the curd to set to a firm jelly like mess, before being cut and scalded (heated to release more whey).  The curds are then transferred to the Cheddaring table, as the whey is drawn off.

Over the next hour the Cheddaring process, which gives Cheddar its unique tang, texture and flavour, takes place:  the curds are cut and stacked in blocks, which are periodically turned and restacked, expelling more whey and raising the acidity as the blocks firm up.

When James gives the nod, a great lumbering milling machine is brought over and the textured curds are torn up.  Salt is added and the cheese is packed into hoops and pressed for several days.  These great lumbering blocks of cheese are then wrapped in cloth and lard to allow the cheese to breathe and develop moulds and flavours, adding a wonderful depth and complexity.  The cheeses then sit for over a year in the age-old maturing rooms in Keen’s cellars – maturing rooms with a lovely grassy smell which is unique to Keens and adds character to their cheeses.

George himself carries out frequent tasting and assessments before he is happy to stamp a cheese with his name and release it to the Cheddar-hungry cheesemongers.  As with all farmhouse Cheddars there is significant batch-to-batch variance, which is why the best cheesemongers, myself included, go down to the farm to select exactly the cheese we want.

The three Somerset cheddars also owe their remarkably different characteristics to each one’s slightly different ‘terroir’, cheese-making procedures and maturing.  Only by tasting will you find your favourite: 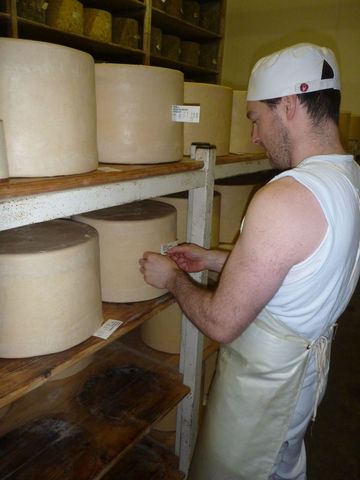 These three West-country Cheddars have become synonymous with quality unpasteurised farmhouse Cheddar, as for many years in the UK if you wanted the best Cheddar the choice was really: Montgomery’s or Keen’s.  However over the last decade there has been a gradual rise in the number of real-quality farm produced Cheddars made with unpasteurised milk.  Hence nowadays it is not all about these producers and it is worth seeking out some of the other traditional cloth-bound Cheddars now being made – all of which have the unique characteristics and make a Cheddar to rival these greats of Somerset: Isle of Mull, Winterdale Shaw, Hafod, Barwheys, Quickes, Dale End, Lincolnshire Poacher …

Keen’s Cheddar is a ‘guest’ cheese at The Courtyard Diary for the month of April and May – to order it please ring 01729 823 291 (or order Hafod and in the ‘Special Instructions’ field on the checkout write in you’d like Keen’s instead!)

At The Courtyard Dairy we bring in different Cheddars as ‘guest’ cheeses for short periods – as Keen’s is this month, but our benchmark Cheddars stocked in the shop today are both not from Somerset!  We felt that the cheeses industry had come on so much that we would give our support to two relatively unknown and small Cheddar makers who make cheese that is just as good as well as really interesting and different: Hafod and Dale End Cheddar.  Hafod is cloth-bound unpasteurised Cheddar made in perhaps an even more traditional way than the Somerset cheesemakers.  By diligent research he has reverted to an ancient Cheddar recipe he found which is much more time consuming (producing a buttery rich tangy cheese).  Dale End is an unpasteurised Cheddar made in North Yorkshire which is more full-on and tangier.  Made by a social enterprise Camphill Community with only 46 cows it is aged for 18-months+.

* Pint pot starters are very different than commercially freeze-dried DVI starters used in the majority of modern cheese-making, which can be sprinkled on top of the fresh milk.  Pint pot starters require incubating and breeding.  They contain many different strains of bacteria to add flavour complexity.  In ancient times, starters weren’t used: instead naturally sour milk, the bacteria held in wooden equipment or the previous days whey would carry out the same job.  These can give more inconsistent results and can raise hygiene concerns, so are never practised in the UK, but are still used on small farms on the continent of Europe.

Block Cheddar cuts down the cheese-making time as much as possible, using faster starters and mechanical Cheddaring/milling.  Rather than cloth binding, the cheese is then vac-packed and matured in fridges.  This produces cheese with acceptable up-front flavours, but lacking the depth and complexity of those produced by artisan methods.