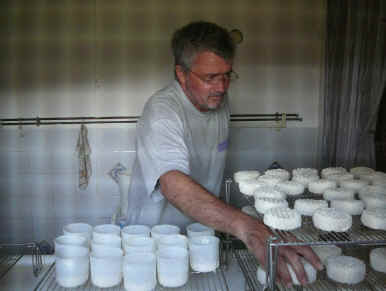 This weekend, to increase my cheese knowledge, I biked up to a nearby hill farm called Bois Blanc. I was greeted by Yves, a rustic French goat herder.  On what was an amazing afternoon we started by chatting over his table in the farmhouse, about life, geography (and, importantly, cheese) before walking up the hill to see his small herd of goats. He has a range of breeds (naturally he affectionately points out his favourite animals), letting them graze freely on his grass which is full of herbs, flowers and wild grasses, all of which add a great flavour to the milk which is passed on to the cheese.

He milks the goats everyday, and then uses the milk to produce a small amount of farmhouse cheese in his little shed. This cheese is then sold on at markets and through local shops (including the local Mons shops), but only in small quantities as he barely has enough to sell (between 20-30 of these petit cheeses a day!)

The cheeses are a great expression of affinage, from his young just-set cheese (about 3 days) to his affiné (about a month old). They really tell a story of Yves’ farm’s terroir, goats and cheese-making techniques. Tasting the different cheeses is like tasting a tangible expression of time – you get a real sense of how affinage works. Everyone has a favourite age for their cheese, as the texture, taste, appearance and smell changes as time passes. These cheeses were mild, with only a delicate hint of goat flavour, and a lovely creamy freshness in the young, contrasting with a nice bite to the affiné.

Yves is a true artisan farmer in the real sense of the word; it was a pleasure to visit. 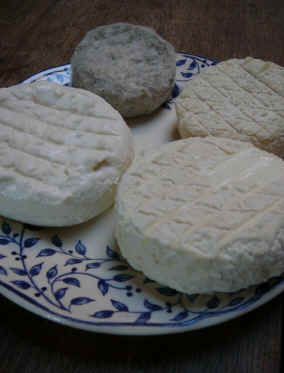 I went back. I couldn’t help myself. Yves invited me to spend the day making cheese with him – how could I refuse passing the time with a big Frenchman making cheese in a shed no bigger than a cupboard. We were certainly going to get to know each other, if nothing else!

First we chucked yesterdays cheeses into the bin – a storm had arrived the day before and the change in air pressure, electrostatic fields, humidity and temperature had rendered the whole days batch useless.

Then we added the ‘petit lait’ to that morning’s milk and let it ferment for 20 hours. ‘Petit lait’ (or lactosérum) contains bacteria which starts the fermentation, changing lactose sugars (in milk) into lactic acid, and forming important flavours as it helps to form the curds. Most cheesemakers use freeze-dried or commercially made starters, but Yves, in the true spirit of capturing his terroir, uses his own bacteria from a ‘petit lait’ he creates at the beginning of the milk season by essentially letting the milk go off. This ‘petit lait’ is used for the first batch at the beginning of the season, for every subsequent production he uses a bit of leftover curds and whey (from the day before) to start the process off. 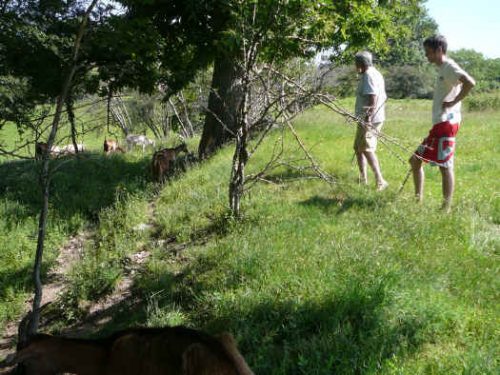 As the goats’ animal husbandry is fantastic, the unpasteurised milk poses no problems. By letting it naturally ferment he uses all the natural bacteria remaining present (usually killed by pasteurisation). This means he captures the true natural flavours of his land – the only thing he adds to his cheese that he doesn’t make himself is salt. However, it also means the cheese varies vastly in taste, flavour and texture; the production and affinage must be altered accordingly.

We had two buckets of goat milk from the same day’s milking – for some reason (Yves answer to my query was a Gallic shrug) one had formed a hard curd and the other much softer. So we carefully scooped the hard curd to form a base in the mould followed by a topping of soft. Yesterday’s cheeses were un-moulded, flipped, and salted; with a flick of the wrist that was best left to professional (when I tried, I managed to cover everything in the room with salt!)

While the moulds drained we took a break: a piece of fresh cheese wrapped in a salad leaf, so simple, so delectable! Over the next 2 hours continuous topping up of the cheese moulds took place, as they drained. After that our work was done, ready to start all over again the next morning.