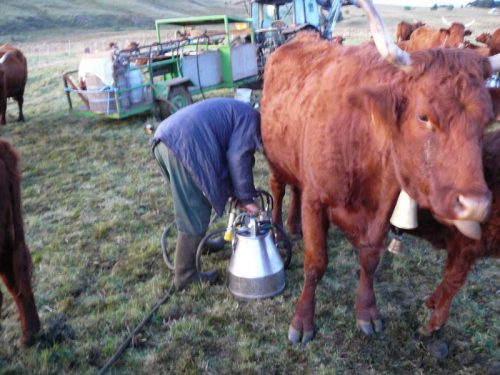 When I think of French cheeses I think of the classics: Brie, Camembert, Munster, Epoisses, Beaufort, Comté. The soft, the washed rinds and the supple mountain cheeses. None of the textures and flavours we find with the hard British cheeses such as Cheddar, Gloucester, Leicester and the like. But there it was, hiding in the corner of the cave at Mons – an English Cheddar. Regarded suspiciously by the other affineurs, I give it a bit of English love and attention. But England’s most famous gift to the cheese world as a cheese style cannot be denied, can it? Apparently, in France, yes: “Ah, but we invented it first…” Surely not? I had to find out!

Searching around the cave I found cheeses with a similar texture and flavour – Cantal, Salers and Laguiole, native to the Auvergne region and neighbours (Central South France). These cheeses, however, have a different flavour profile from Cheddar, helped by the fact they have slight differences in production (but not much), different breeds of cows, different terroir, and they all form natural rinds (not cloth-bound like traditional British Cheddars).

In fact, I’d tasted these cheeses before in the UK and have never really been impressed, until an encounter with Ann-Marie of Bath Fine Cheese Company: the Cantal she had brought for me to taste was amazing, with a complexity of flavour and texture not easily rivaled. It had been aged by affineur Xavier Morin of Aurillac (who specialises in cheeses of the Auvergne), so I swallowed my Cheddar-ish British pride and went to meet him to see what I could learn.

All of Xavier Morin’s cheeses were fantastic, and beautifully aged; he really has a true connection with his terroir. His unique cave and tunnel, as well as his specialist affinage techniques, really contribute to the flavour of his cheeses.

After viewing his caves we went up into the mountains to view the fabrication of Salers. Salers de Buron is

made only in the summer (actually 15th April – 15th November, though often cut short by the weather) in the mountains of the Auvergne region. Exclusively made on farms, the name comes from the small wooden huts called burons. The rich flora, under-sown by phosphorus, potash and magnesia soils, adds real depth to this cheese.

The fabrication of Salers starts immediately after the milking, and takes several days before the wheel is formed and ready to be aged. In a traditional manner the cheese is made in wooden vats called ‘gerles’; these wooden vats are jam packed full of natural bacteria that has developed over the tens to hundreds of years in which the vats have been used on the same farm.  This natural bacteria present in these vats and the whole room (it is only cleaned with whey – no harsh chemicals), helps add a depth and uniqueness of flavour to the cheese, a true expression of each farm where it is made and the Salers milk (not the sanitised perfectly clean metal ones of the UK).

Rennet is then added to set the Salers cheese (the quality of the milk and the use of the wooden gerle means it has no need to also add commercial starters and ferments which most cheesemakers have to).  It is then gently cut, pressed into blocks for 1.5 hours with regular turnings, and then the blocks of curd, again in wooden vats, are left to rest for a day (not dissimilar to Lancashire cheese).  Slowly developing flavour over this time the curd is then milled (broken up) and salted.  Then rested again before being pressed into its wheel shape for 48 hours. Affinage often takes place in small caves on the farm (although Xavier takes them straight after production and ages the cheese in his tunnel), with the natural flora, affinage temperature, humidity and process forming the rind. And when it’s finished, yes, it has a great flavour.

There are unfortunately less than 100 producers left for this labour-intensive cheese. I went to watch ‘Salers de Buron Traditional’. Even more traditional, even more hard work, with only eight producers left, what makes this cheese unique (and different to generic Salers de Buron) is that the cheese must be made with the milk of only the Salers cow, which gives only a tiny bit of rich flavoursome milk (seven litres per day, compared with 20+ litres for more commercial breeds), and must be made in the chalets high up in the Auvegrne mountains – where the Salers cows feeds on the rich mountain flora – to produce and even more special milk!

The Salers cow looks big and aggressive with its huge horns. It is, however, the opposite: gentle, quiet and very maternal. The maternal instinct is what makes the cow a right pain to milk. At each milking the cow’s calf must be present. To milk the cows the farmer rejoins the calf with its mother by gently calling out for the name of the calf (knowing them all by heart) The calf obediently trots forward and lines up next to its mother. The suckling starts, and then it is gently removed and the cow milked normally. Without doing this, the cow refuses to be milked. That’s why there are less and less producers every year – every day starts at 4.30 in the morning and finishes at 10 each night, often to produce only one 30kg cheese. It’s also why Xavier, rather gallantly, does not add a margin when he sells ‘Salers de Buron Traditional’, giving all the profits back to the farmer.

Hervé Mons also champions this cheese, and does his best to promote and preserve it too. All those years 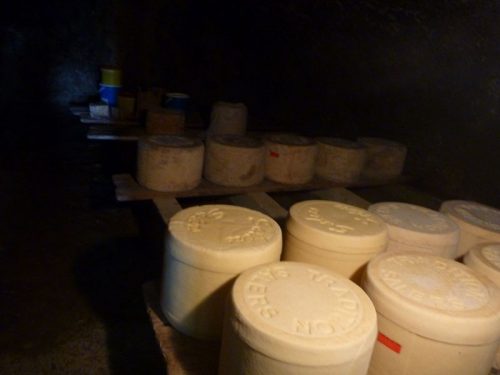 ago (he won’t tell me how many!) when he was learning his trade, he did a whole summer season with Salers de Buron Traditional. His deep friendship with the old farmer Marcel has continued to this day. An early start to view the milking here was also in order. High in the mountains the farm hands travel out the cows to milk them in-situ using little one-legged stools, leaving the cows’ in situ-helps keep them on the brilliant mountain pasture for as much as possible.

The milk is then returned to the buron, situated in the middle of nowhere, where the next generation of Salers cheese producer is learning his trade. Several hours later, the process finished, he places a finished cheese in his small cave. Guarded by the cross of butter above the door (a superstitious ritual using the first milk of the season), the finished Salers rest, awaiting Hervé to turn up with his van and take them to his cave, where he will age them to perfection.  For Hervé Mons the ancient way of making Salers au Buron Traditional cheese is so special he has put all his might behind keeping this farmhouse production alive, supproting and promoting Marcel’s farm and way of life so that it might continue.

And as to who invented the ‘Cheddar’ recipe first, I think it depends who you ask… But I think – the clue is in the name!

You can get Salers de Buron Traditional in the UK from the Mons stall on Borough Market, or give us a ring and we will do our best to get you some!