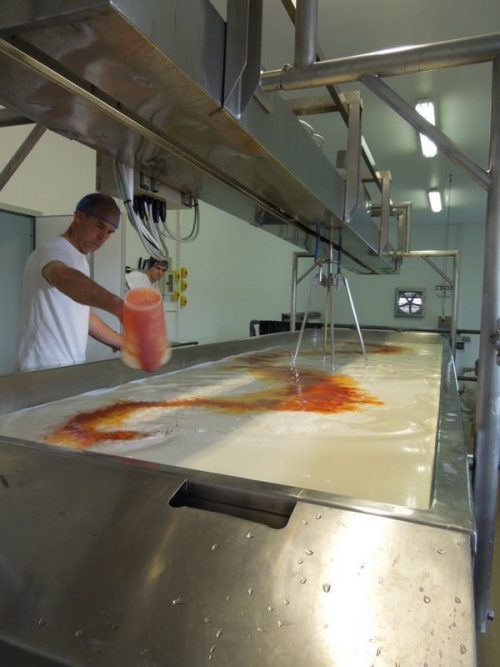 What I didn’t realise when Andy told me we’d be visiting Sparkenhoe red Leicester to help make cheese and select out some interesting cheeses for the shop was that: a) we’d set off at 5am from Settle to make it in time to watch the milking and b) Sparkenhoe would make me wear the shortest pear of shorts known as the make room where they make cheese is so warm!

So, on the latest visit, I went along to Sparkenhoe Farm where Jo and David Clarke rear their own Holstein-Friesian herd on their lush, green, clover-covered pastures.  They are pedigree breeders of Holstein-Friesian cows producing some of the finest examples of this breed around.  (The herd was in the semi-final of the National Herds Gold Cup award).  These 150 of the highest quality milking cows go onto produce the lovely unpasteurised milk that Jo and David use to make the Sparkenhoe red Leicester.

David and Jo Clarke are dairy farmers, their family have farmed the area for generations and have been invaluable in helping the 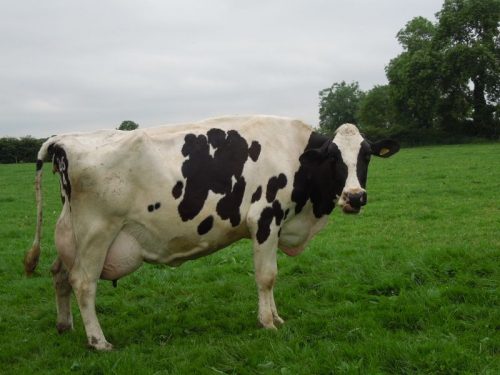 farmhouse cheese business off the ground.

Initially when David had decided he would have to make cheese to ‘add-value’ to his farm to enable him to keep his dairy herd he dismissed red Leicester.  It had a reputation as a boring cheese.   Until one of David Clarke’s friends reminisced (over a pint…) about the brilliant red Leicester he used to collect from a local farm and sit on top of as a child in the back of the truck.  But with no farmhouse red Leicester being made in the county for 50 years it was a distant memory.  So, in 2005, Jo and David decided to revive farmhouse red Leicester and create Sparkenhoe red Leicester cheese, with a view to bring this cheese back to it’s rightful reputation.  Interestingly, red Leicester had previously been made here on Sparkenhoe farm between 1745 – 1845. 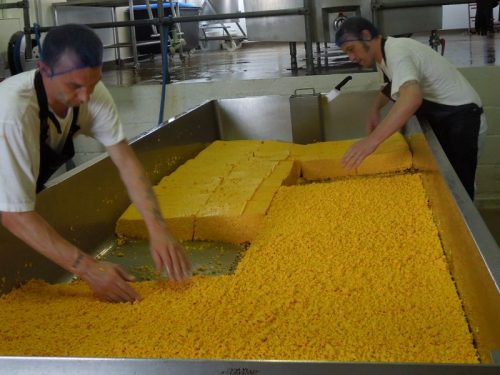 The process starts with the raw (unpasteurised) milk being pumped straight from the milking parlour directly into the cheese room at 4am; they use freshest possible milk straight from the cow! The animal rennet is added to set the curd and make the cheese. Then annatto is poured in to the milk to give red Leicester its orange colour – annatto is a natural product derived from the seeds of the Achiote trees which has become associated with colouring cheeses like red Leicester, Cheshire and Shropshire Blue.

The curds and whey are gently scalded and separated, then cut into blocks, which are turned by hand, put through the mill, then salted. These curds then go into moulds where they will be pressed and turned for 24 hours.  Out of the moulds the team will bind the wheels with cloth and lard and then take them to the ageing room.  This traditional process of cloth-binding and larding the cheese allows the red Leicester to form a natural rind; which helps contribute to the flavour and complexity and allow the cheese to breathe.

Making the cheese by hand, with their own unpasteurised milk and then maturing it in this traditionally way helps make Sparkenhoe red Leicester a unique cheese, expressing the quality of their farm.

Sparkenhoe red Leicester is then matured for 4-6 months – the cheese is mellow at this stage – cirtusy, sweet and nutty with a flaky texture.  It’s a very different cheese from the mass-produced vaccum packed 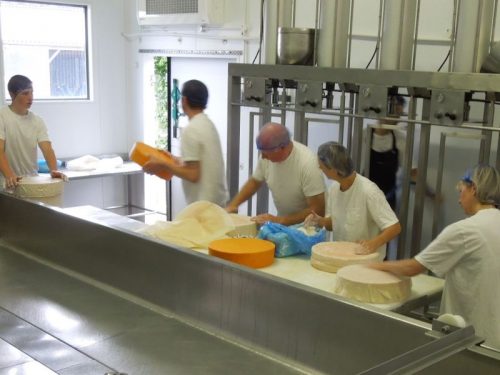 At The Courtyard Dairy the cheese has been further matured to 16-18 months to make Sparkenhoe Vintage red Leicester, which has a unique taste – the caramel flavours develop further and the cheese has a fuller, more powerful flavour.

(Oh and my favourite part of the day was the Lunch – crusty toast, topped with thin slices of tomato, chunks of Sparkenhoe Vintage red Leicester, and sliced onions then grilled to bubbling and hot!)

Read more about the Sparkenhoe red Leicester and it’s story on The Courtyard Dairy’s blog here.

Cheese-maker David Clarke of Leicestershire Handmade Cheese has a favourite way to cook his creation that is Sparkenhoe red Leicester.  Read more by clicking the link below.