A year ago, cheesemonger Sam went out to Botton Village to make Summer Field Alpine cheese. Here’s the story of his visit, learning about Botton Village’s unique way of farming and cheese-making…..

On a clear morning in mid July I made my usual 10-mile commute to The Courtyard Dairy, cycling up through the Dales and moors, dotted with imposing Highland cattle and with spectacular views to Pendle on the left and Malham Cove on the right. I had been making this journey into work since March, but this day was different: we were going to visit a cheese producer. 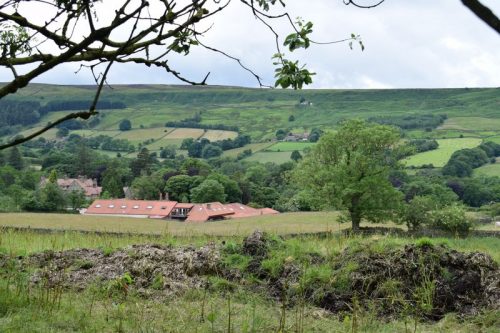 And so from Settle a team of us made tracks through the Yorkshire Dales towards the east coast, passing close to Bolton Abbey and Fountains Abbey – both key sites in the early development of cheese in the north of England – before climbing up onto the North York Moors. We then dropped steeply past Stormy Hall – apocryphally so called after Henry VIII took refuge there during a storm, but more likely to be named after the Sturmy family who were resident there in the 13th and 14th centuries – and finally into Danby Dale and Botton Village.

Botton is a Camphill Community home to around 90 adults with learning and mental disabilities, who help farm the southern end of the dale. With the diverse, verdant pastures and 46 traditional Dairy Shorthorn cows famed for their rich milk, Botton makes an ideal dairy. 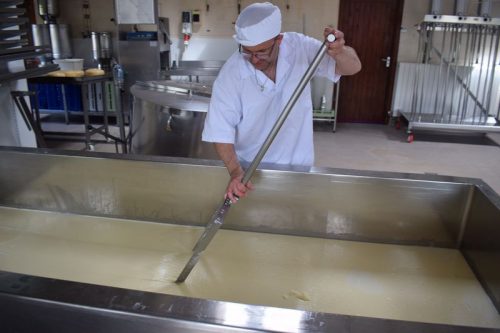 As we entered the dairy building, we spotted that the milk had already been added to the vat and was being slowly heated in preparation for adding the rennet and starter cultures. Cheese-maker Alastair Pearson was waiting for us, but was occupied with the preparation a ‘morge’, a special bacteria-rich salty solution which is washed onto the rind of certain types of cheese as they ripen.

Alastair learned to make cheese on an organic farm in Germany after unexpectedly being offered the job when their existing cheese-maker quit. This has resulted in Alastair bringing German techniques and recipes back to Botton, a serendipitous happenstance as many of Botton’s volunteers are Dutch or German, so these styles of cheese are very popular. Most impressive and unique is Summer Field Alpine, similar to Comté but actually based on a Bergkäse recipe.

The method for producing Summer Field differs significantly from traditional British cheeses in a number of respects, as we were about to witness. After scrubbing down and getting into stylish dairy whites and wellies, and having a brew, of course.

Having already visited Graham Kirkham at Mrs Kirkham’s creamery in Lancashire I had some idea of what to expect, but was keen to see where the recipes differed. By the time we had finished our cups of tea, the milk had reached the correct temperature for adding the starter culture and rennet, 27 and 31 degrees Celsius respectively, to be precise (that’s the milk for the cheese, of course, not the milk in the tea!).

This warmth will help form the curds and separate the whey, as the initial growth of bacteria from this ‘starter culture’ occurs. 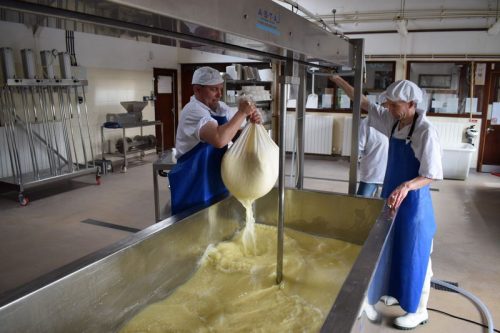 When he thinks the desired ‘set’ of the curd is reached, Alastair checks the consistency: the milk should have solidified to the point that it splits cleanly when a finger is pulled through it, or that it comes cleanly off the side of the vat.

With the desired set, it is time to cut the curds. This is done first lengthways, then crossways, resulting in even cubes of curd around the size of a grain of rice. These are then heated again in the whey to ‘cook’ the curds. This was the first step which differed from the process I witnessed at Mrs Kirkham’s. Graham began to drain and ‘stack’ his curd as soon as it was cut, allowing the curd to acidify slowly and expel as much whey as possible.

As the ‘cooking’ process takes some time, we used this time to take a quick walk around the village. As well as the dairy, Botton residents also work at multiple farms and gardens, a seed farm, a wood workshop and a glass engraving centre.

We also couldn’t resist tasting some of the cheeses in the ripening room. This is how we grade cheeses, including Summer Field and Dale End  Cheddar, to select the batches we find to be the best and reserve them for The Courtyard Dairy. Sometimes it’s a hard job, tasting hundreds of pieces of cheese! 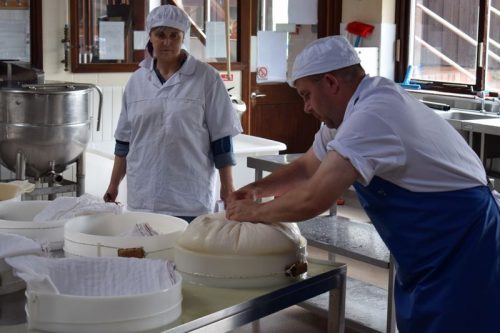 Upon returning to the creamery, the curds had ‘cooked’ for long enough, and the cheese was ready to be made. This was a major contrast to Lancashire cheese production. At Mrs Kirkham’s, I watched the whey being drained from the curds while in the vat, the curds then being repeatedly cut and stacked to drain, before being left to acidify over one to two days, then milled with dry salt. To make Summer Field Alpine, Alastair followed an Alpine method more similar to that used to make Gruyère or Comté.

First, a large cheesecloth was dragged along the bottom of the vat to scoop out as much curd as possible, a process known as ‘dipping’.

The full cheesecloth was then lifted out of the vat and immediately placed into ‘hoops’ to form the shape of the cheese. Alastair was careful to keep as much whey as possible with the curds, and once in the hoops they were pressed only lightly, enough to give them shape.

These cheeses would then be turned three times as they drained over the next couple of days. Finally, they would be submerged in a brine bath for a few days, depending on size, to permeate the entire cheese with enough salt to ensure the desired biological development and flavour. 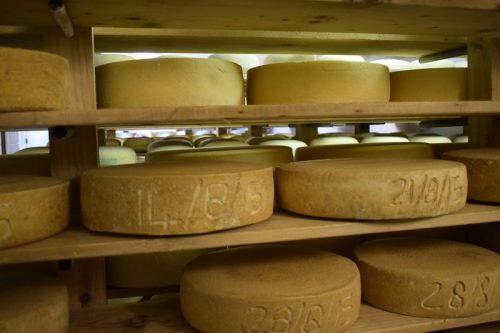 This is one reason Summer Field can only be made in the summer months: lower salt, moister cheeses are susceptible to bloating and undesirable flavours caused by a prevalence of certain (harmless) bacteria (which are more common in winter milk from hay fed cows than in summer milk from cows at pasture). British cheeses such as Cheddar can be made year-round because they are drier and the salt content is high enough to suppress these unwanted bacteria before they can populate.

After our visit, this batch of Summerfield will be turned and washed occasionally for a period of 12 months until fully mature. Only then will we find out whether this particular batch has the required characteristics to make it onto the counter at The Courtyard Dairy.

All about the amazing Dale End Cheddar made on the North Yorkshire Moors by Botton Creamery.

Alastair only makes a small amount of cheese: he farms only 46 Dairy Shorthorn cows…