~ Order now and choose your own delivery date at checkout ~ FREE delivery when you spend £55 ~
Home Learn About Cheese Producer Visits Stichelton Cheese – the usurped king of blues?
Show Sub-menu 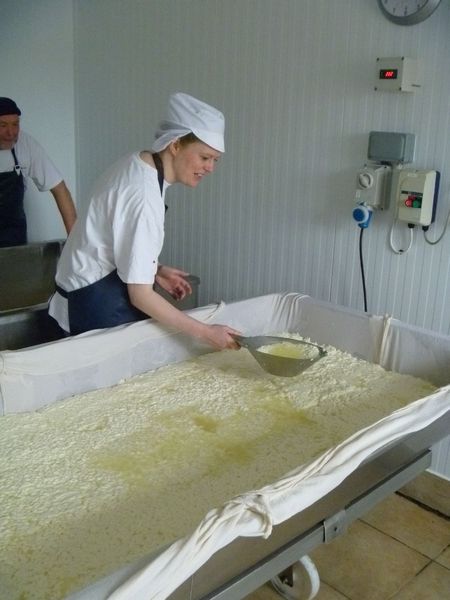 “Does the rain affect the cows?”  I asked herdsman Mick at Collingthwaite Farm, late last year.

“Well it affects me,” he replied, as he ushered the next cow into the milking parlour, “and if I’m not happy then neither are they!”

The milk supplied by Mick’s cows is used to create a modern British classic cheese: Stichelton.  Collingthwaite Farm has 120 prime organically-farmed British Friesian cows, producing rich unpasteurised milk that each morning is fed into the cheese making room next door to the milking parlour, to enable each day’s process of making Stichelton.

Joe Schneider created Stichelton Dairy in 2004.  Having emigrated to Europe from the United States in the early 1990s, he ended up making cheese in the Netherlands.  Realising that the British cheese industry was driving things forward in the artisan area, he joined a biodynamic farm in Sussex (Plaw Hatch) before becoming head cheese-maker at Daylesford Organic.

But Joe nurtured a desire to set-up his own cheese-making business.  And on a trip to London, he got 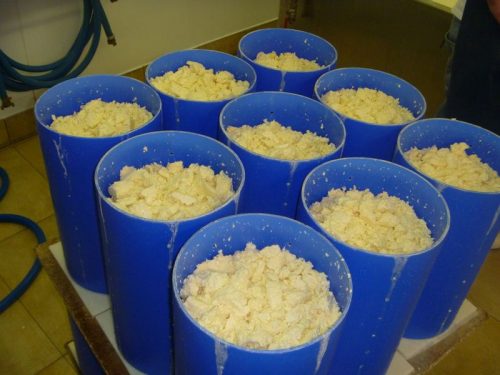 talking with Randolph Hodgson about cheese.  Over a pint of bitter, an idea was mentioned and developed.  A raw-milk Stilton.  Made with unpasteurised milk, on the farm, just how it used to be.

Randolph Hodgson was bemoaning the lack of such a cheese and reminiscing on its past greatness, sweetness and depths of flavours (Colston Bassett made the last unpasteurised Stilton in 1989; read more about this and the history of Stilton here).

The idea of creating a new ‘Stilton’ stayed with Joe, and several months later he began searching for a suitable site.  Somewhere where he could easily obtain quality milk, and with a building he could transform into a dairy.  The Wellbeck Estate and Collingthwaite farm proved ideal.

So Joe set up by himself to re-create this traditional farmhouse cheese.  Using Mick’s unpasteurised milk, Stichelton was created using very traditional techniques: a very slow set (low amounts of starter bacteria and rennet), gentle handling of the curd, and hand-ladling it to the cooling table so the curds do not break (this helps to produce the rich creamy texture that is a feature of Stichelton – and also Colston Bassett, the last remaining Stilton to be hand-ladled.  Most other producers use two-step machinery to move the curds, which handles them more roughly).  Hand-ladling the curd gently, so that the whole vat contents are moved and mirrored into a new vat, just upside down, was the essential factor. The curd setting vat and the draining vat are ‘married’ they were designed to be together (and were used at Colston Bassett for 50 years before here); so that the volume of milk and then curd will exactly transfer between both vats to drain correctly at the right speed.  Ladling is back-breaking work – it certainly builds up the muscles on your ladling arm! 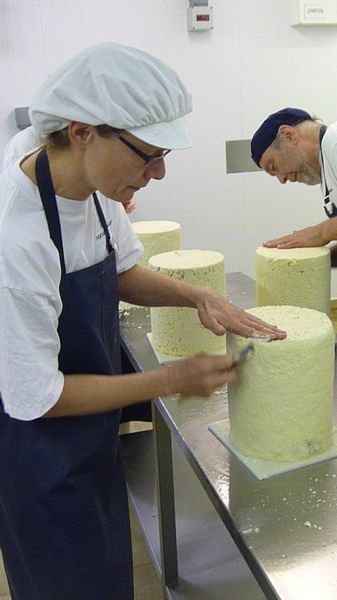 After the curds have drained overnight, they are placed in hoops and left to ‘hasten’ (at a warm temperature) to encourage growth of the yeasts which will form the glossy red-ruby coat that is a feature of this cheese (this rind influences the diverse complex flavours of the cheese; try it for yourself – taste a bit near the rind to see how it differs).

Traditionally Stiltons are then rubbed up.  Stichelton follows the same procedure: using a butter knife the coats are smoothed over to seal up gaps that would allow the air in and the blue mould to form early.

Left to mature for about eight weeks, the Sticheltons start to break down, helping to form the essential complex flavours.  Each is then pierced (they used to do it by hand – every cheese – but now use a machine) to allow the air in and the blue mould to form over the next 4-6 weeks.  Stichelton differs here from most Stiltons, because it is pierced later, and not quite as much.  This means it can develop less blue, and the subtle mellow blue that does develop helps to provide a more balanced, rounded cheese.

It’s over 15 years since the first batch of Stichelton was made, and production has come on massively.  As Joe and his team have got used to the changing nature of their unpasteurised milk, they have managed to re-invent this truly classic cheese so it is consistently amazing:  creamy, toasty and nutty with a rich yet gentle blue note.

Stichelton remains a small farmhouse producer (they make about 30 wheels a day, a drop in the ocean 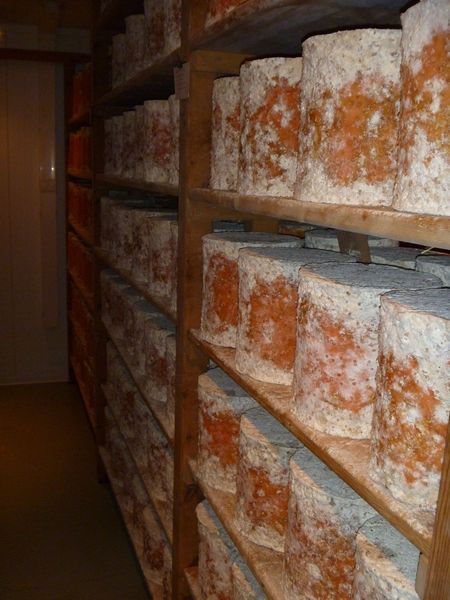 compared with the hundreds to thousands of Stiltons produced), and you could argue Stichelton is the heir to the throne of Stilton.

The sad twist in the tale is that Joe is prevented from calling his amazing cheese by the name Stilton – or even to state that it’s made to a Stilton recipe.  The Stilton name is protected by the Stilton Makers Association, and a change to the decree in the 1990s meant that Stilton was only to be made with pasteurised milk which the remaining Stilton makers insist on to this day.

Yet help was at hand.  One of Joe’s loyal customers suggested the name of Stichelton – the old Saxon name for the town of Stilton, (Stichl means Style and Tun means Hamlet).  So Stichelton was named, but remains an outsider to the throne of Stilton.  It is not currently a ‘Stilton’. Hopefully one day it will regain its title.
Jow would argue: who should have the power to control the heritage of Stilton and a part of Britain’s history; farmhouse unpasteurised production of Stilton is historically how it was made, surely we shouldn’t penalise someone who re-creates this tradition?

Read more about the history of Stilton here.

Footnote: At the time of writing there is an outstanding application to DEFRA to change the ‘Protected Designation of Origin’ (PDO) on Stilton so that Stilton can be made with unpasteurised milk.  The argument is that PDOs are there to protect traditional regional foodstuffs (and often in France insist on unpasteurised milk being used for certain cheeses – Roquefort, Comté…) and are not used to protect branding or hygiene, which are controlled by other methods.  We will have to wait and see.