~ Order now and choose your own delivery date at checkout ~ FREE delivery when you spend £55 ~
Home Learn About Cheese Producer Visits The story of Sparkenhoe Red Leicester, Red Leicester actually made in Leicestershire!
Show Sub-menu 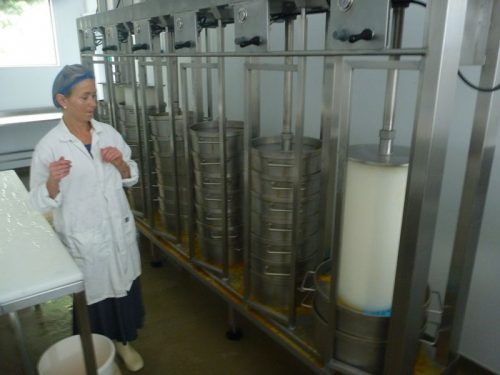 Close to the edge of Leicestershire (barely a mile inside) is Sparkenhoe Farm, near Hinckley. Hinckley, with its clay loam underfoot, is the traditional red-Leicester area. And it was here, in 2005, 49 years overdue*, that farmhouse red Leicester production was revived.

David Clarke, a 3rd-generation farmer, split off from the family farm to buy 160 Holstein-Friesian cows and a small plot of land down the road.

For a time he sold the milk to a local dairy, but one night in his local, David was bemoaning the lack of good quality red-Leicester cheese in the area.  Pointing out that his farm used to make farmhouse red-Leicester (from 1745-1875) his friends suggested he start producing again.

So off went the complete novices, David and his wife Jo, to take a short three-day cheese-making course at 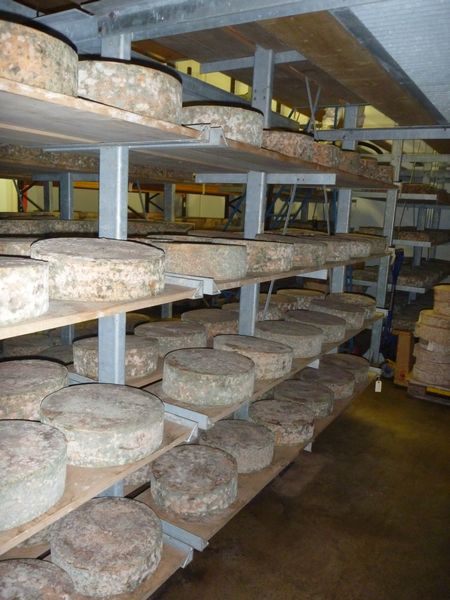 Inexperienced and armed with only a basic recipe, they started cheese-making. “The first batch was terrible” admits Jo. But after a major wholesaler came down and bought seven cheeses, Jo and David were quick to ring round and tell all the other wholesalers that people were buying traditional farmhouse red-Leicester called Sparkenhoe. A rush of orders followed.

They decided to set out properly, well as properly as they could – digging old cheese vats out of nettles in abandoned fields and welding together odds and ends to form their very own ‘cut and shut’ vat. Tinkering could begin!

The recipe and cheese-making process could then start to develop, with a little help from local experts at the farmers’ market. Dairymaids from a bygone era tasting the cheese: they would argue that’s not how it should be! With advice, recommendations and dusty old hand-written books – “that’s how you make it … like that” they’d tell Jo.

As the recipe developed so did the atmosphere of the ageing rooms. The smell of fresh clean Beachwood dissipated and was replaced by an irresistible earthy, grassy and musty aroma.

David and Jo now make cheese three times a week in the traditional 20kg ‘flats’ of Sparkenhoe red Leicester as well as their smaller 10kg versions (they fit in a TNT box nicely – a case of the tail wagging the dog!). The 20kg flats have a greater, more complex flavour since they develop slower and longer.

Traditionally red-Leicester is at it’s best around 4-6 months. At Sparkenhoe they sell it aged around 6-7 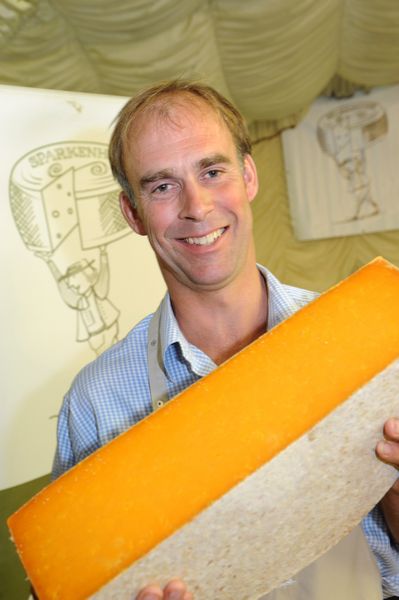 months; their method of production makes a cheese that develops slowly and is at it’s best around this age.  They also sell a special Sparkenhoe Vintage, aged for 18 months with a great depth of flavour; that’s the one we stock at The Courtyard Dairy.

And that’s how red-Leicester should be – a deep russet red, flaky and silky with a slightly open texture, with savoury flavours that are nutty, smooth and rich. David and Jo have certainly come a long way since those first few flats, and have helped re-establish red-Leicester as a quality cheese!

Historically, red-Leicester is a younger creation than most of the other British territorials (Double Gloucester, Cheshire…). Its method of making was influenced by their cheese-making practices. It came about to use up surplus and leftover milk from Stilton production, as it was a cheese that could last a little longer. Traditionally it was made by the Stilton dairies and local farms (and sometimes it still is). The rising popularity of Stilton, however, meant a lack of surplus milk available from the three counties allowed to supply it (Leicestershire, Nottinghamshire and Derbyshire**). Consequently its production (and quality) decreased, with, nowadays, more made outside Leicestershire than in!

Even the big Stilton dairies who do make red-Leicester in Leicestershire tend to make an untraditional sweet and simply flavoured cheese: one of the reasons red Leicester doesn’t have a PDO is because David and Jo Clarke won’t agree with them on this recipe; they won’t consent to protect anything but a traditionally made cloth bound red-Leicester! And quite right too!

And why is it red? I think I’ll save that for a later blog…

* By 1938 there were no recorded farms making red-Leicester, yet local reports suggest a Mr Shepherd of Bagworth continued until 1956.

** Adjoining counties can also supply milk in times of shortage.

Cheese-maker David Clarke of Leicestershire Handmade Cheese has a favourite way to cook his creation that is Sparkenhoe red Leicester.  Read more by clicking the link below.