Tarentais cheese – a visit to an amazing producer 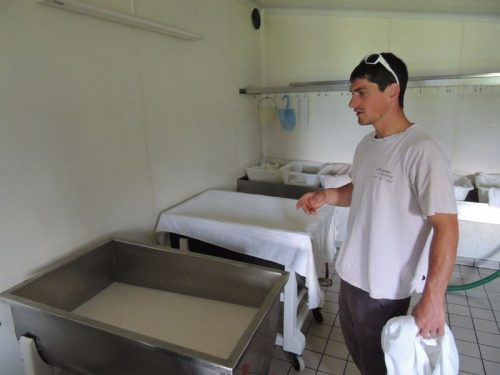 I’ve visited a lot of cheesemakers.  Very rarely have I been back twice.

But some producers are awe-inspiring. Tarentais cheese is one of these.

I first visited Tarentais in 2010 and they really captured my imagination. Since then I’ve visited and made cheese with many other producers – from superb Stiltons, to classic Cheddars and lactic Loire goats’ cheeses. But Tarentais still holds a special place in my heart.

I had to go back.

Gabi & Sozic Cattenoz still carry out the ‘transhumance’; an ancient practice in the Alps where they farm 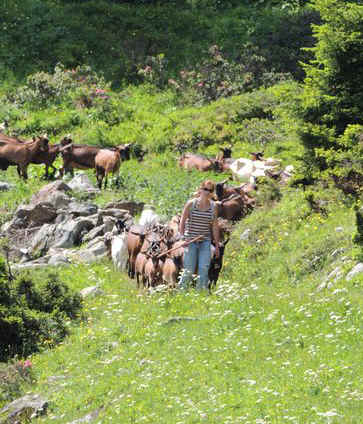 down at the village (still 1600m high) in the winter; then moving – on foot with their animals – up to a remote Alpine chalet (at 1850m) to farm and make cheese in the summer. Their chalet is so high and remote that they could only get up at the beginning of July this year, before that it was covered in snow. If you’ve ever been to Les Arcs skiing, you’ve probably skied past their chalet. It’s 45 minutes drive by 4×4 from the nearest high-ski village – they have no electricity, no mains water, use gas lamps….

They move up the mountain for three reasons: in the summer they rent land there from the commune and it’s cheaper than in the valley; the land they have in the valley can then be used for making hay to see them through the winter; and the pasture up on the mountain tops is so intense and diverse – the wild flowers give their cheese a flavour that cannot be equalled.

It’s this pasture and the unique mountain terrain that makes their cheese special. Gabi and Sozic get-up at 5 am and milk the goats before Sozic takes them out onto the mountain where she will sit watching them. Like a proper shepherdess. The terrain here is so steep it is only suitable for goats. This area is prime-Beaufort cheese producing country and if the hillside could sustain cows it would attract a premium so the milk could be used for Beaufort. But it’s too steep and only goats can deal with it; hence Tarentais was created. 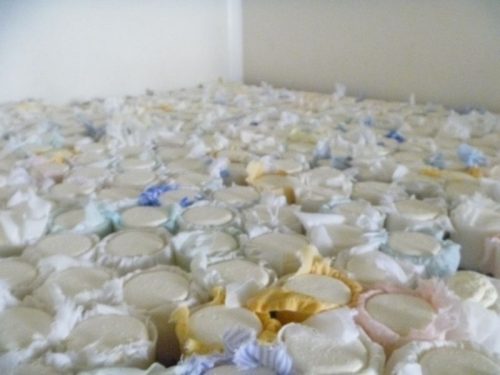 Whilst Sozic is out with the goats, Gabi makes the cheese following a unique method of setting the curds in a lactic-style before draining them and combining several days’ worth of curd. They are then mixed and moulded, each with its own unique draining cloth (from old hankies to torn sheets, it’s a hotchpotch of colour).

The natural flora on the cheese produces an amazing wrinkly yeasty coat, which turns yellowy/pink with time. An intense flavour, this is one of the few goats’ milk lactic cheeses that can age for 4 months or more. Gabi sells all the cheese to affineurs (cheese refiners, mainly Hervé Mons) twice a month so he doesn’t have to go down the mountain to drive around delivering and selling cheese. The affineurs simply arrive, take it all and disappear to age it, then sell it throughout the world.

Sozic drives the goats back off the mountain in the early afternoon, then enjoys a well-deserved beer (chilled courtesy of the flowing stream next door to the chalet) before milking the goats and going back out on the mountain with them until darkness falls.

Gabi and Sozic aren’t from the Haute-Savoie, and unlike most cheese-maker’s up in the mountains, they 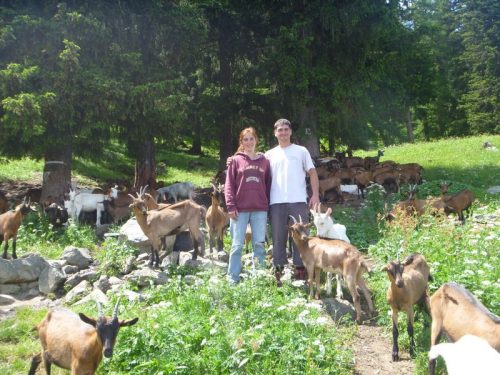 aren’t elderly. The previous owner and his mother (who still sits down next to the farm in the valley watching us with a suspicious eye as we go in and out) invented the cheese only  60 years ago as a response to what to do with the land. But reaching a ripe old age and with no one to take it on they didn’t want the cheese to be lost forever. So they advertised ‘un petit announcement’ for someone to take it on. Gabi and Sozic, living in the busy world of Nantes at the time, took up the challenge of the ‘good-life’ and worked with the previous owner for a year before he gave them the business, so the cheese could continue to live on. There remains one other producer of this ‘Tarentais’ cheese, but unfortunately Gabi thinks he will give up soon too.

Usually when I leave amazing cheese-makers like this in France I feel overawed but disheartened; the cheese-makers are usually well into their fifties or sixties, with nobody to take over, and the cheese will one day disappear when they give up. With Tarentais it’s different: with this young couple I still see a future for this incredible cheese and it gives me hope that other cheeses may also be saved.

They should be supported.

(Tarentais cheese is available to buy in the UK from The Courtyard Dairy or MonS at Borough Market, it now takes the name of Petit Blaja).