Michael loves milking cows.  So much so as soon as he hit the teenage years he was pretty much responsible for milking all of the cows on the family farm, both before and after school. 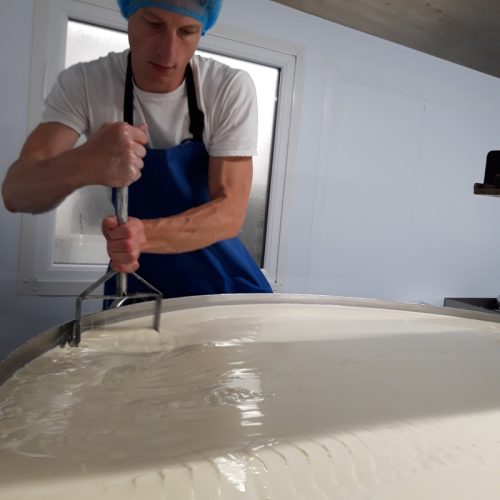 Michael’s family hasn’t a long history of farming and he was much more of the artistic persuasion (his uncle is the famous actor Nigel Davenport). His dad bought the farm on a whim: he decided he wanted to farm and, marrying a local girl, went into farming feet first, with no experience.  He soon tired of it and left it to Michael and his mother (who is nearing 100 years old and still lives on the farm to this day!)

Now with his wife Mary, Michael continues to farm their 180 acres on the flats on Lincolnshire.  Their farming is traditional in nature, with small fields, hedgerows and even a barn owl, which allows them to produce all their own forage (feed) for their 70 cows – a closed herd of Friesians, with the odd Brown Swiss and Red Poll.

In 2005 the milk price collapsed and Michael and Mary decided they would have to diversify to continue.  So they went on a Chris Ashby cheese-making course and got a recipe for a soft blue cheese.  They decided they’d make this cheese from day one – “We like blue cheese!” is Mary’s simple answer to why they developed Cote Hill Blue.  Another reason was that they wanted to create a product that would complement rather than compete with the excellent Lincolnshire Poacher hard Cheddar made nearby.

Many cheese-makers spend years tweaking and perfecting their recipe, with trials and experimentation at home.  Michael and Mary simply took Chris Ashby’s recipe, which was ideal as the cheese is simple and quick to make, and allowed them to get out of the dairy and do other jobs around the farm. Altering the recipe slightly, an 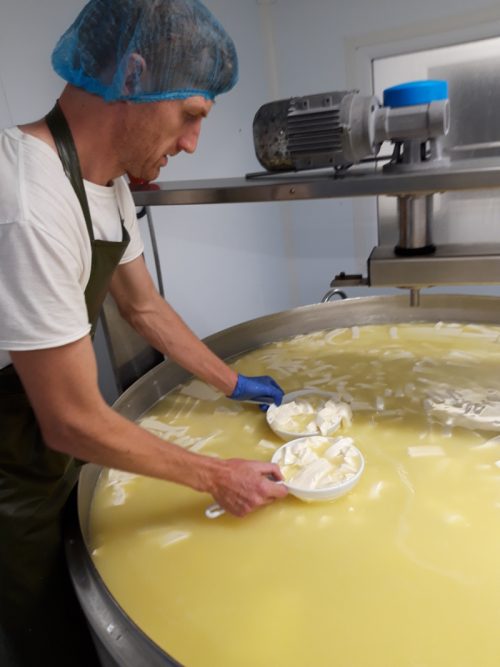 d using a small 100-litre vat, they commenced cheese-making using the only moulds they could get their hands on at that time.  To this day that has dictated the cheese’s shape, size and format. Luckily from day one the cheese turned out perfect, and Cote Hill Blue was born as it is now – very lucky indeed!

The curd is cut gently and stirred minimally to retain its moisture and make a soft blue.  After it is drained it goes into a blueing room where it is pierced (at 2-3 weeks old) to allow the blue mould to grow.  Believe it or not, over the last 10 years Mary has developed an allergy to the mould spores, so although she can eat the cheese she can no longer pierce it, nor work in the maturing rooms!  At four weeks old it is fully blue and formed.  It is then sold onto cheese shops where, over the next 2-3 weeks, it matures, softens and breaks down to become an oozing soft blue.

The cheese-making experiment revitalised their farm and enabled them to continue dairy farming.  So much so that five years ago Michael and Mary decided they would need staff to help.  Their four sons at that time had left the farm to pursue lives elsewhere, and Michael and Mary wanted to offer them the opportunity to return so a new generation could be involved.  But how to do it? How to ask them honestly and not press them or coerce them?  How to deal with the family politics?  In the end they decided to write their sons a formal letter, simply asking them.  Which they did. 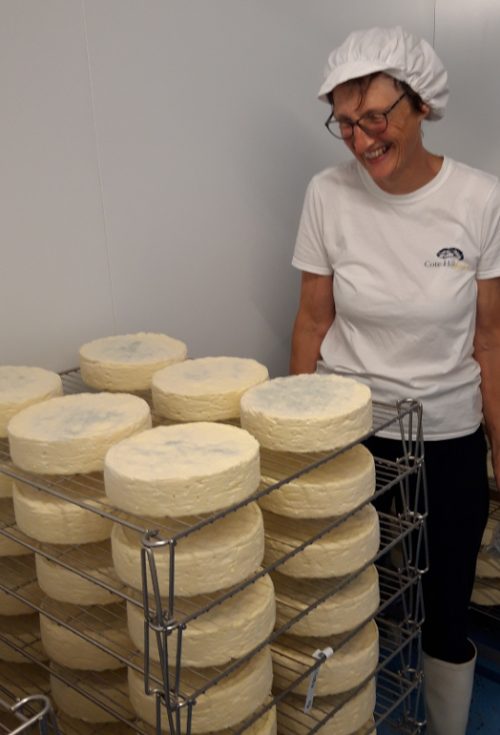 And heard … nothing.  For weeks… months…  They thought maybe the letters hadn’t been received!   But eventually two sons, Ross and Joe, came round to the idea and decided to move back close; both are now involved, along with Michael and Mary, in the cheese-making and farming.  They’ve taken over the day-to-day making of the cheese, now using all the milk from one milking (about 900 litres a day – a long way from Mary’s initial 100) and have also developed some other fabulous cheeses to go alongside – Cote Hill Red, Lindum and Yellow.

Cheese-maker Michael and Mary Davenport have a favourite way to cook Cote Hill Blue cheese, with the odds and ends they have left.