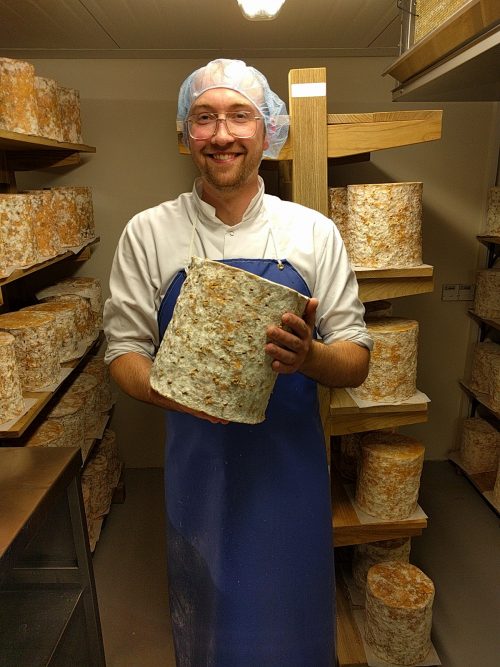 “This room is not for me”, stated my four-year-old daughter, Mary, as she entered the final ageing room where Young Buck Blue is matured.

You could understand why – the room smelt strongly of ammonia as the cheeses reached their final maturity and the blue breakdown of the interior was most evident.

The maturing room we had been in just before, however, was a delight: heady, boozy and yeasty – before the blue has developed in these blue cheeses but the yeast coats were showing at their best. Mary wanted to stay in that room.

We were visiting Mike Thomson, creator of the amazing Young Buck Blue cheese in Newtownards near Belfast. In 2013 Mike set out on his own as a one-man band to create one of Britain’s finest blue cheeses, and to be the first producer of raw-milk cheese in Northern Ireland for over half a century. 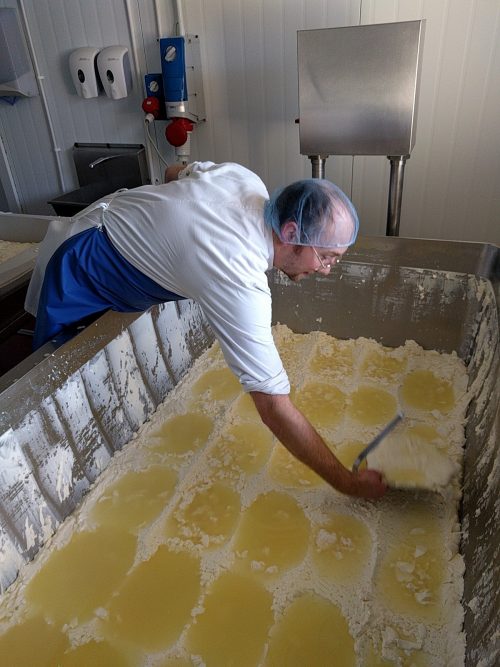 Many years earlier I had met a young Mike on a cheese-making course and he, like me, had progressed to the wide world of ‘cheese work’ as cheese-maker for Sparkenhoe farm in Leicester. But his dream was always to return to Northern Ireland. Eventually, with a large help from crowd-funding site Seedrs and 700 investors (the banks wouldn’t lend him a penny!), he realised that dream.

But what cheese to make? Mike had set his eyes on one of the most difficult and high-risk cheese-makes in the UK – Stilton. He loved the way the cheese was made and he loved the end result – good Stilton with softness of texture, gentle blueing, and rich, rounded, diverse flavours.
But he wasn’t located in the region allowed to make Stilton, and he wanted to make unpasteurised cheese (which Stilton isn’t), so he knew his cheese would never be ‘Stilton’. But looking at Stilton was a good starting point for him. Using a 1919 Practical Cheese-making book, he took their method for this cheese and proceeded from there. Over the next four years Young Buck would steadily evolve from that original recipe to being something very different, with a nod to the famous British blue cheeses, but with its own character and depth. 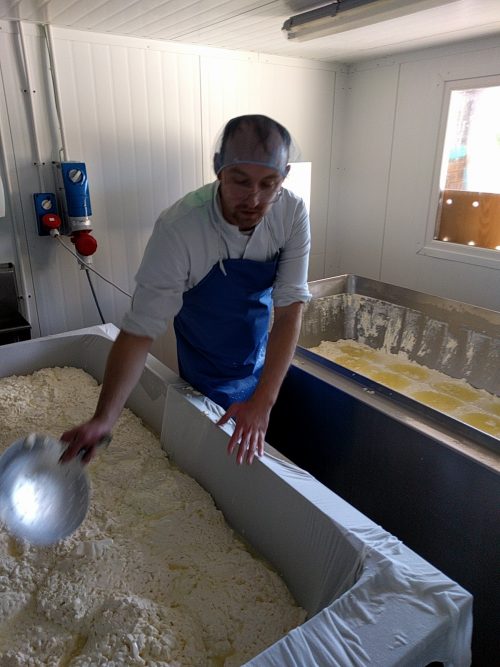 And here we were, ready to spend the day helping Mike to make that very fine cheese.

It all starts with raw (unpasteurised) milk from a nearby farm. Following the recipe, Mike adds a minimal amount of starter bacteria and rennet to set the curd. The long, slow process of making this style of cheese (24 hours, compared with just four to six hours for Cheddar) is why it is difficult to make. But when you get it right – the result is fabulous. Mike uses less starter culture than most and cultivates a gentler acidifying of the milk. And in the way he gets his curds, ladles and drains slightly differently, he also traps more moisture into the curd than normal for modern-day Stilton makers. This leads to a final cheese that is like Stilton in many ways, but different – moister and softer, with a more developed, ‘mushroomy’ rind that breaks down the softer paste.

After an hour of waiting for the curd to set, it is cut and stirred before being left to settle. A few hours later it is drained and hand-ladled onto a draining table. This hand-ladling used to be practised at all the blue cheese makers, but now only Colston Bassett Stilton, Stichelton and some ‘speciality’ batches of Cropwell Bishop Stilton are made this way. Ladling by hand treats the curd more gently, and gives a better cut, drainage and texture. But it is very labour intensive. 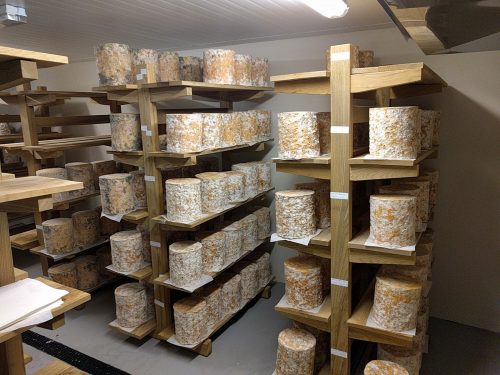 The ladled curd is left to drain overnight. Next morning the drained curd is cut into blocks and then milled by hand – each block is ‘squidged’ before being salted and put into hoops. Other cheese-makers have automated this step, but with Young Buck’s curd being so much softer, Mike has not.

In the hoops the curds pack down together, then are moved to a ‘hastening room’ to encourage the yeasty rind to grow (the glossy ruby-red coat we associate with this style of cheese). The next part of production is the renowned ‘rubbing up’, where the rind is smoothed over to prevent blue getting in too early, then transferred to the ‘boozy’ room to develop. It is pierced at 6-8 weeks to allow the blue to form inside. Mike pierces each and every cheese 250 times … using a home kebab skewer he adapted.

Further maturing in the final, powerfully smelly room allows the blue to spread through the cheese, breaking down its texture and giving the characteristic rich flavour.

Young Buck is less blue than you might expect (Mike enjoys the contrast in his cheese of curdy, sharp pockets, mushroomy soft areas next to the rind, and blue creamy rich bits where the blue has dominated) Stilton it is not. Fabulous it is. Without doubt, Young Buck is one of Britain’s best blue cheeses.

A video visit to Stichelton

Joe Schneider wanted to make a raw-milk (unpasteurised) Stilton and so set up a small dairy in partnership with the Wellbeck Estate in Nottinghamshire in 2006. Unable to call it…

An Interview with Mike Thomson: creator of Young Buck Blue

A brief synopsis of your business and career? I run Mike’s Fancy Cheese and we make a raw-milk blue cheese called Young Buck, here in Newtownards. We have been making…