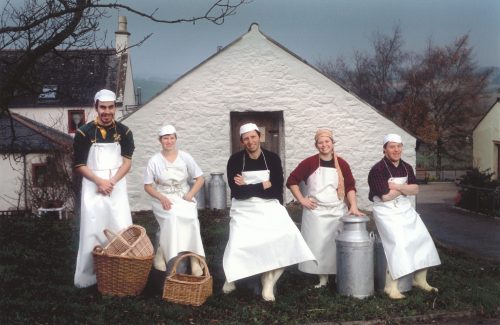 Farmhouse British cheese has seen an enormous revival in recent years with brand new Bries, blues and brilliant bloomy goats’ cheeses. But things were not always thus; for many years farmhouse British cheese and raw milk cheese had all but disappeared. Things started to change in the early 1980s when a few budding new smallholders and cheese-makers took up the challenge of a return to traditional cheese-making. Nowadays there are committees, consultants and courses. In those days there was nothing. Not many of those that helped started the raw milk cheese revolution are still around today, but Barry Graham is one of those who is. Barry played his part in that groundswell of interest in traditional cheese-making, becoming a founding member on the committee of the Specialist Cheesemakers Association. The Association went on to link together many small farms, cheese-makers and retailers, providing a body of support and scientific guidance that allowed farmhouse cheese to re-establish itself. The contribution of those ‘founding fathers’ of British cheese is sadly often overlooked.

Barry came to cheese-making through Loch Arthur community. Loch Arthur is a Camphill Community which was set up near Dumfries in south-west Scotland, to provide valuable employment and living space for adults with learning disabilities. In the community, everyone lives and works together in shared tenancies, helping out on the farm (milking, as well as keeping pigs, sheep and cattle for meat), the large vegetable garden, and the creamery, bakery and craft workshops.

When Barry joined the community as a volunteer in 1985, they had four cows. These were milked by hand each day, and what couldn’t be drunk as milk within the community was made into cheese. 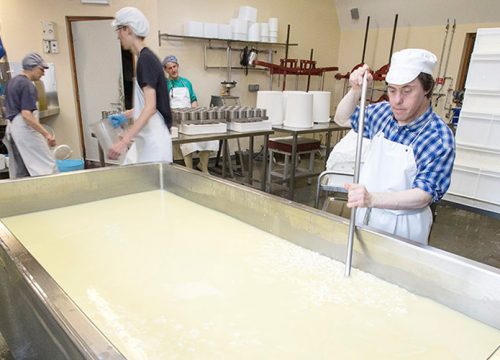 Barry searched throughout south-west Scotland to find any remaining farmhouse cheese-makers and found none, so resorted to speaking to retired older farmers to learn their methods and find out what they used to make. From this, he developed a range of cheeses at Loch Arthur. Building everything from scratch, with no internet for advice and no readily available cheese-making supplies, the community used centuries-old traditional presses and drainpipes as moulds, as they managed to cobble together a working creamery. The hard-Cheddar style Loch Arthur farmhouse cheese then came into being. This Cheddar-recipe cheese is still made to this day and the community now farm 30 cows, making a range of cheeses. The community has grown too, to 75 residents and over 50 paid employees. In recent years they’ve added a successful and thriving farm shop and café which the public can visit to see what they do and enjoy their produce.

Barry still helps in the creamery, but nowadays spends more of his time running the large and successful social community – a truly inspiring place to visit. In 2011 they won the BBC Food and Farming Awards, and you can see why – not only is it ethically and morally worthy, the quality of what they produce is outstanding too.

Barry’s contribution to British cheese and to the amazing Loch Arthur Camphill Community is an achievement to be truly proud of.

Graham Kirkham talks about what tradition means to him and for his farm in this 50-minute podcast or video. This interview with Andy & Kathy explores British farmhouse cheese in…

Earlier this year The Courtyard Dairy visited Botton Village Creamery. Botton is part of the Camphill Village Trust (CVT), and was the first and still largest Camphill created. Below is…