If you go into any good cheese shop, you’ll often hear the cheesemongers talking about the breed of cow that produced the milk from which a cheese was made. Phrases like “they farm Dairy Shorthorn cows”, or “this Cheddar is made from milk from 65 Ayrshire cattle” can make you wonder… what difference does the breed of cow make?

Interestingly, many famous European cheeses are made to rules that stipulate the exact breed that must be used to make that cheese: Comté must be from Montbéliarde or Simmental cows, Salers Tradition must come from the Salers cattle, and ‘red cow’ Parmesan (vacche rosse) is leading the way as the premium Parmesan. But why is there so much emphasis on the breed of cow, and does it really influence the quality of the cheese?

Well perhaps not so much when cheese is made on an industrial level, because the variations in milk (from cow breeds and diets) will often be smoothed out when supplies are sourced from many farms. Most commercial cheese producers also standardise their milk by adjusting the butterfat/casein before production, so they always have the same quality to start from. Hence variances and influences of breed of cow on cheese are less significant when the cheese is made on a large scale.

On a farmhouse cheese-making level, however, where just one herd’s milk is used to make cheese, the effect is much greater. In such small-scale cheese making, the breed of cow is one of many factors that determine the quality of cheese, and can help to make a cheese unique to that particular farm – a true representation of its terroir.

When Jonny Crickmore (of Baron Bigod fame) employed a French dairy professional to help him make a Brie as good as the French, the professional insisted he change his herd breed to one more suited to making really outstanding cheese. Jonny duly imported 70 Montbéliarde cows from France, and the rest is history.

The differing fats and proteins are captured in the cheese, and, in time, broken down to create the flavour. There is also evidence that differing breeds affect other aspects of cheese-making too, for example some breeds have more ‘lactic acid’ bacteria in their milk, which influences the cheese making process.
At the end of the day, cheese is a sort of concentrated milk, so to make real ‘world-class’ cheese you need ‘world-class’ milk.

Having determined, then, that the type of breed affects the final cheese, the next question is what breed is best for making cheese?
Well, it’s not black and white (sorry for the farming pun!) And contrary to what you may think, Jersey cattle aren’t that good for cheese making. Their milk is often too rich, with the fat globules too large to capture in the curd, settling out too fast. So Jersey cattle are great for liquid milk and cream, but not ideal for cheese making. 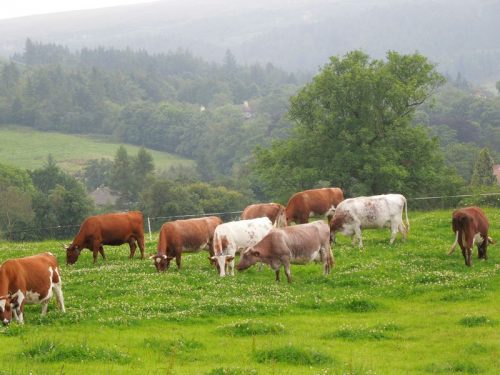 Most dairy farmers in Britain use the black and white Friesian or Holstein cattle. Some statistics say as much as 90% of the dairy population belongs to these breeds or their crosses. This is the cow associated most closely with the British countryside. But in fact, they haven’t been here that long. The majority came over after the Second World War, from Friesland in the Netherlands and Holstein in Germany. They became popular because
they are the archetypal super dairy cow, giving high yields and also being quite easy to manage.

Although Holstein-Friesians produce a high volume of milk, there is an argument to say that their milk isn’t an ideal quality. Not only that, but they are intensive animals, needing high input of food to get high output of milk. They also have a relatively short lifespan (often just 3 lactations; five years old).

Yet it is important to know that within each breed there will be huge variances from herd to herd as they are affected by each farm’s genetic history and breeding policies. Which explains why Holstein-Friesians can be managed, fed and bred to create a herd that suits cheese making. In fact, two of the best British cheeses – Stichelton and Kirkham’s Lancashire – are made with Holstein-Friesian milk.

Before the influx of Holstein-Friesian cattle, there were many traditional breeds throughout the UK, often coming from particular areas, such as the Dairy Shorthorn (the North), Gloucester cattle, and Ayrshire (Scotland). And although these breeds don’t produce such a large volume of milk, they have good quality milk which has a helpful protein to fat ratio and small globules of fat that are more naturally homogenised and easier to trap in the cheese curd.

These breeds not as intensive to farm as Holstein-Friesians, they have a longer lifespan (6+ lactations) and are useful for meat as well as dairy (they have more male calves).
There are examples of Dairy Shorthorn cattle at Botton Village that have lasted over 15 lactations, and ‘Sage’, an Ayrshire cow at Holden Farm (Hafod), was over 20 years old before she was retired. Thanks to Holden Farm’s non-intensive farming, the animal then went on to make real quality meat (Andy http://hafodhad a bit!) – getting the full lifetime value from the animal.

Many farmhouse cheese-makers have turned their back on the intensive pedigree Holstein-Friesians, choosing either to add more traditional breeds into their herds, or add in other continental breeds famed for quality cheese-making milk – such as Montbéliarde (used for lots of French cheeses) and Swiss Brown cows (originally used for Gruyère).

Maybe these breeds of cow do produce tastier cheese! 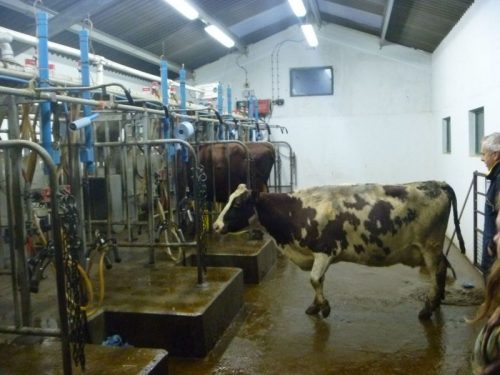 If you pair the differences in quality alongside ethical, moral and philosophical issues, making cheese from these cows keep traditional cow breeds from extinction, uses cows that can feed at pasture (as they are better suited to terrain), increases biodiversity, and helps make a more traditional and individual cheese – keeping traditions alive.

Part of the identity of Hafod Cheddar is the rich Ayrshire milk they use (Ayrshire are a hardy-breed that can survive on their hilltop farm in remote Wales) – it gives their cheese its softness, buttery-rich flavour and roundness of mouthfeel – it helps make the cheese special.

There are many other influences on the quality of the milk, however, not just the breed. For example, how the cattle are fed, the climate, seasonal changes, stage of lactation of the animal, animal health, herd management routines, etc. In fact cheese-maker Jamie Montgomery talks less about the cow breed, and more about how the cattle are fed. Which leads onto… cow diet, which will be the subject of the next article.

Taste the difference – here are some cheeses that are made with milk from differing breeds:

Notes on choosing the best breed of cow.
Farmers also need to take into account not just the volume and quality of milk but also to breed for the health, welfare and longevity of the cattle. Breeds were often originally developed to be suited to a particular area (e.g. Ayrshire’s are hardy and can cope with more rugged terrain/adverse conditions).

When deciding which cow to choose/breed most farmers will be looking at: