~ Order now and choose your own delivery date at checkout ~ FREE delivery when you spend £55 ~
Home Learn About Cheese Cheese Musings & Tips Farming at Hafod Cheese – a year in review, as told by herdsman Nick Millard
Show Sub-menu 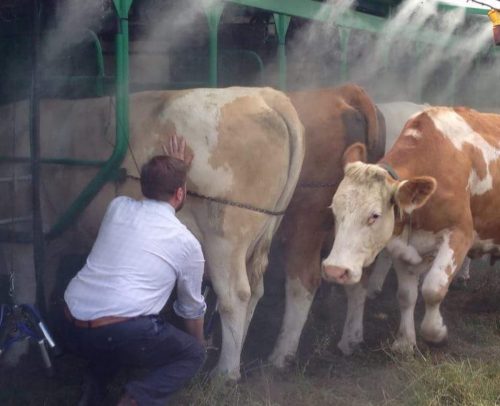 The farm began 2017 under a substantial cloud of bovine Tuberculosis (bTB). Unfortunately we had a quite terrible test result just before Christmas 2016 and were counting down the days until the next test, which was due in March. The January to March period is always a quite depressing time of year in these parts anyway – everyone withdraws into their own worlds and you don’t see so much of the neighbours as farm work moves indoors and everyone gets on with their own bleak winter grind. Having said that, I really enjoy the farm in winter, intoning Winterreise to myself and reading Hamsun and Laxness in the long, cold evenings. What such grief wallowing says about me I don’t quite know. So, it was a slow wait for the next test, but well worth the wait because we were completely taken by surprise when we received a CLEAR test! No animals condemned to slaughter! It was a huge relief for us, following the loss of 17 animals – mostly in-calf heifers – since May 2016. Then began the extremely slow wait for the next test in May, which would be our ‘clearing’ test. Pass that one and we’d be officially bTB free once more.

Spring arrives
The arrival of spring took our minds off the wait and the cows went out to graze in the second week of April, two weeks earlier than in 2016. The very dry winter had left its mark and the fields were not waterlogged, which removed the usual spring concern that the cows would damage the wet soil and grass with their sharp little feet; a phenomenon called poaching.

The dry winter also meant that our contractors could get on the fields with their heavy machinery, so it was much earlier than last year that Calfin, the ploughman from Llandewi Brefi, was able to plough five of our fields to prepare the ground for the spring-sown oats, peas and barley crops. Looking back at field records, we got these crops sown three weeks sooner than usual. It would be a hopeful fool that dared to dream that we might get these crops harvested three weeks earlier than usual. I suspected that heavy rains, so typical of a Ceredigion August, would render them all much too damp and keep the combine harvester away until September, as is the norm.

The change in cheese as the cows go out
Rob, the Cheese Chief, noticed an immediate change in the milk when the cows went out to pasture. As the young Hafod cheeses were turned out of the press, all of a sudden they were several tones darker, more golden in colour. This is all thanks to the difference between fresh grass, which contains high levels of beta-carotene (which gives grass-fed cheese that golden aspect) and the dried and wrapped grass of that winter feed, haylage, which has lower levels of beta-carotene due to the bleaching effect of the sun during the post-cutting wilting period. An especially extreme example of the difference in appearance of winter and summer cheeses is seen in mountain varieties, such as Comté and Beaufort of Jura and Savoie. In these regions the farmers feed their cows hay in the winter, and to make hay you have to expose the cut grass to a high amount of sun in order to dry it to the correct moisture level, thus you get pale Comté and Beaufort when the cows are not grazing, and you get the golden cheeses when the cows are up in the alpine pastures feeding on the fresh herbage. 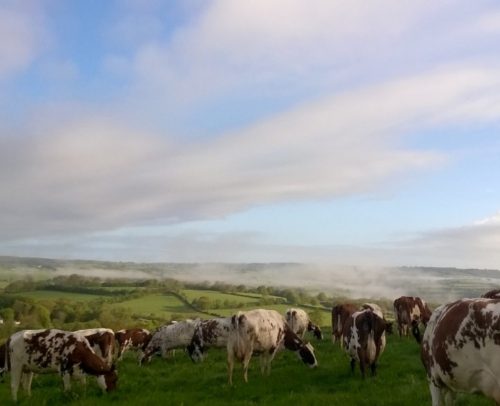 May’s bTB test was soon upon us and to our complete and utter relief, we passed! TB-free one year after the herd went down with it. Due to the nature of the paperwork, however, it was a few more weeks before we received official clearance to turn-off the dairy’s pasteuriser and resume making Hafod with raw milk.

Hafod changes again as it switches to raw milk
The Cheese People observed some differences between freshly-made raw-milk cheeses and freshly-made pasteurised-milk cheeses. First off is the much reduced energy consumption: running a flow pasteuriser consumes a lot of energy, even for the tiny quantities of milk we use, thus raw milk cheese is that little bit better for our rapidly withering environment. There is definitely damage done to the milk when pasteurising takes place, as indicated by froth on the milk and, later, the whey. The fact that separate streams of whey and butter come out of the raw milk cheeses during pressing – compared to the cloudy whey that is expelled by pasteurised Hafods – indicates that the milk goes through some sort of homogenisation process during pasteurisation. Finally, the ‘makes’ are often wildly different when involving raw milk. As Rob says “I have to keep my wits about me”. This is all to be expected with the fact that pasteurisation kills a lot of the microbes in the raw milk, leaving a ‘blank slate’ in which the starter culture controls the cheese make. With raw milk, the milk’s own microbiological community has a far greater say in how things proceed and that community changes according to what is going on in Cowland… where the cows have been grazing, where they have been lying down, what we feed them after milking in the shed, who is in milk, who is dried-off and no longer in milk, how many cows have just calved, how many are at the end of their lactation, etc., etc.

Now, what I stated above is not to say that the pasteurised cheeses we’ve been making have been in anyway lacking in quality. In fact, while we were nail-bitingly expecting some worryingly bland Hafods that had more in keeping with the supermarket than The Courtyard Dairy, we have been enormously surprised by how toothsome the pasteurised Hafods have been. We have noted an enjoyable variation between batches, with notes of cream and butter and, I always think, a finish of young, green walnuts. Having said that, I couldn’t wait to try the raw milk Hafods as they approach maturity in the coming months: in those I expected to really taste the changing of the seasons.

Summer arrives and with it, wild flowers and more complex cheese
As the spring turned into summer we were grateful for the quite extraordinary sunny weather that we had been enjoying. This was especially welcome for the wild flowers that were in absolute abundance, and I look forward to tasting the cheeses made from the flower-grazed milk. Numerous French and Italian research papers have observed stark differences between raw milk cheeses made from the milk of cows fed on species-diverse grasslands versus those raw milk cheeses made from the milk of grasslands that feature fewer species. The more complex the grassland, the more complex the flavour and aroma of the cheese will be. Of course you can have the most interesting, exciting milk in the world, a milk gravid with possibility, but if you have a complete oaf in the cheese room then you will have an oafish cheese. Fortunately for the cheese-eaters of the world, Rob, Jos and Tess are exquisite cheese-makers and all I hear is celestial choirs glistening in Mahlerian rapture emanating from the dairy as another new Hafod is cast.

A very sustained period of high pressure in June even let us make proper meadow hay! Patrick (the farm’s owner) said that in 45 years of farming Bwlchwernen Fawr he has never before been able to make proper, dry hay. The cows are getting ‘buffer’ fed a bale of it each day along with their grazing, and they absolutely love it. Cows love nothing more than good hay.

Soon the sun left us and we soon were experiencing those ever so awful rains that are the calling card of late Autumn. The cows were out grazing a 15-spieces-strong new herbal grass ley, a ley undersown beneath some barley and peas in the spring. The barley and peas were cut as a wholecrop silage early in July – for feeding in the winter – and by the end of that month the herbal grass ley had come through thick and strong, ready for the cows to graze. Sowing a crop under another one like this is a brilliant old farming method that doesn’t get used as much as it should these days. Yes, those were the days, when cars were made entirely of horse and delights like small pox screeched about the place upsetting apple carts and all sort.

I was away from the farm for quite a bit of September, leaving the cows in the hands of their owners – Patrick & Becky Holden – plus relief milkers Melissa, Jo and Evan. I was away, having life-changing experiences in the Italian alps milking goat-like mountain cows by hand and making simple toma cheeses in a make room with a STAGGERING view. Upon my return to Wales, I found that the rain was still going very strong, nearly leading to a very early winter housing of the herd, but that was fortunately put-off until early November.

…and so, once more, to Winter

Winter came in gradually and gently then it went on to become quite savage and terrible when that Beast from the East arrived. As the days grew shorter, the farm and the farms all around us withdrew into themselves once more, hunkering down to cold grind until spring; much like how I began this piece. Even bTB even reared its head again when our six month test left us with an inconclusive reactor cow. Her name is Brenda, and fortunately I can write about her in the present tense because she went on to be cleared when she was retested 60 days later. Thus, the raw milk Hafods continued to roll out of the dairy onto the lorry destined for Settle and the Courtyard Dairy and we lived happily ever after until someone turned off the rain.

Now, as I look at this piece in July 2018, all I ask for is rain! And lots of it! A perverse thing to request from one who lives and works on a Welsh hill farm, however this is a Welsh hill farm that currently it looks more like an Andalusian hill farm. But not a barrel of sherry in sight!

Andrew Hattan, of Low Riggs Farm in Nidderdale, who makes Stonebeck Cheese talks to Andy of The Courtyard Dairy.  In this hour-long podcast and video Andrew talks on his experiences…

Sustainable Farming at Hafod Cheese: a day in the life of herdsman Nicholas Millard

The Holden’s farm – Bwlchwernen Fawr – is pretty small by modern UK standards, with a milking herd of just 73 Ayrshire cows. Nick is the only full-time member of…

Two years ago I visited Holden Farm Dairy and reported some very exciting things that Sam and Rachel Holden were experimenting with:  “I can’t wait to try some of his…