~ Order now and choose your own delivery date at checkout ~ FREE delivery when you spend £55 ~
Home Learn About Cheese Cheese Musings & Tips Opening a cheese-shop … for dummies. (2/4)
Show Sub-menu

I quickly realised that what I thought was hard – finding the location – was in fact the easy bit.  It was now November and I had my work cut out: I had to equip the cheese shop, get it open before Christmas, and get people to know about it.  All in less than a month.  It’s a good job I had some contacts and had spent four years planning this cheesemongers!

First step – flooring; I wanted it tiled or sealed, so I could scrub it down, swill it out and leave it wet to improve humidity, but tiles can be slippy if wet…  much research later (I am an expert on ‘R’ slip ratings now, if you need any advice…) and I’d selected the tiles.  (Here’s a piece of advice – don’t choose white grout; I’d specifically not chosen grey tiles because a fellow cheesemonger told me they get dirty easily, and I was very proud of the tiles I’d chosen.  But then I chose white grout, which… guess what…  gets dirty easily).

Next – the fittings.  I wanted the shop to function as a store and have the cheeses out on display.  I also wanted to just showcase cheese: nothing else, really.  I wanted a specialist cheese refiner and shop.  That’s it.  No watering down the product.

For aesthetics and practicality I chose a slate worktop (because it keeps cold, which is better for the cheese).  And being a Cumbrian lad as well, I had to get volcanic slate from the Lake District – Elterwater quarry to be precise.  Easy peasy that one (apart from it took five people to lift it into place).  But it’s a nice piece of slate.  You can find me in the shop sometimes just stroking it…

To create the stand for the slate top, I spoke to some local joiners who make butcher block bases.  They agreed to do me a deal (we’re in Yorkshire after all).  But the day before it was due to arrive they delayed and then starting asking all types of questions – what size again, what colour, would it matter if it was this size, this wood…  I started to worry.  But I needn’t have.  The stand arrived perfect, although there was still a little wet paint here and there as we put it into place.

To store my cheese on the back wall, for ageing and maturing, needed a little more thought.  I wanted rough-sawn spruce like I’d used at MonS in France: better for the cheese, holds the moisture, has a natural anti-bacterial coating.  But to find quality seasoned spruce in the UK was nigh-on impossible (air dryed and cut in the winter when the sap is down, when the moon is up and a wolf is howling – or something like that).  I wasn’t happy with any I could find, but I could get hold of real quality beech –  harder wearing and again it has an antibacterial coating.  And I wouldn’t have to worry about sap being down, or whatever.  That would have to do!  (And it has done.)

Now the lighting.  Easily sorted: I choose very high quality LEDs – the sort that light up the shop naturally and don’t give out much heat at all.  Expensive but worth every penny.

The name and logo.  I’d been thinking of names for months: Cheese that Pleases, Pasture to Parlour, and lots of other strange ideas.  But then I thought… where am I, and what do I do.  I was in a development called The Courtyard… hence “The Courtyard Dairy”.  Logo design was a bit more involved.  With no artistic talent at all I decided that the best thing to do was run a competition for the two local universities’(Leeds and Bradford) graphic design students..  A flurry of fitting entries came in and I eventually chose Oliver Jackson’s logo for the business.

Now it came to the cheeses – which ones to stock.   The difficult decision.  I didn’t want too many.  Too many 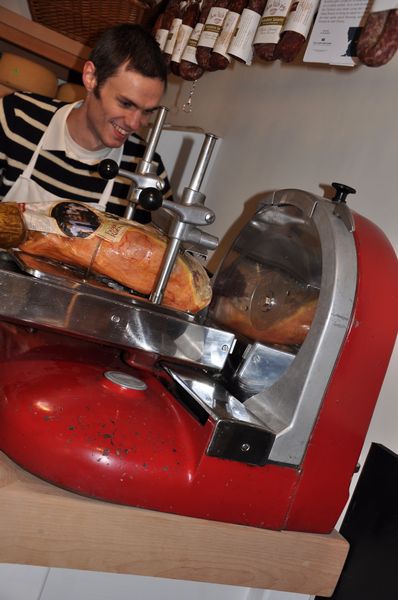 shops sell too many cheeses – by pandering to every whim and taste they end up with lots of little bits, all drying out and deteriorating.  My philosophy is to sell a small range and turn over the cheese fast, so the product remains fresh and in first-class condition.  Too often cheesemakers make a great cheese which slowly but surely dies in a shop somewhere.  If people come into my shop looking for a cheese I don’t stock, I knew that I’d supply them with something even better.

I wanted to sell the best cheeses available in Europe – the ultimates; to make a great cheesemongers.  Not too many, and nothing that wasn’t amazing. Cheese from only small farmhouse unpasteurised producers.  Local?  Well yes, but only if fits the above criteria – quality comes first!

So I chose thirty of the best, across the range of cheese types, the ones that my experience told me were amazing at the moment; twenty as standard stock, with another ten rotating to keep me, and my customers, coming back for more.

And of course I’d add a little difference here and there – refining, changing and ageing some cheeses so that I’d only sell them when I thought they were perfect – I wasn’t going to forget everything I learnt about affinage at MonS.

So, with difficulty, I listed the cheeses I would stock.  Then changed the list.  Then changed it again.  Until I was completely happy that the list I now had was pretty much as good as it gets. 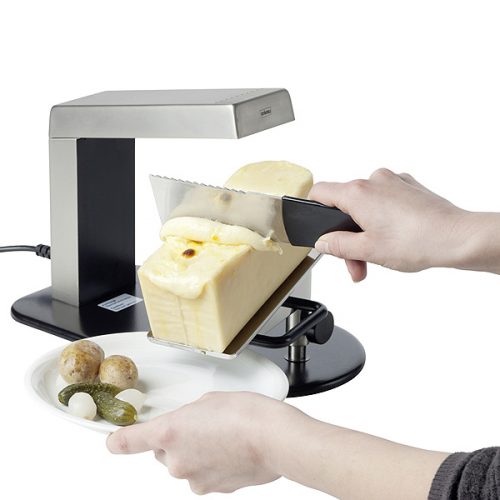 Then there was the meat.  I know what you’re saying – cheese is a kind of meat – but I just wanted a little real meat to complete the shop).  I was only going to supply a few real high-quality charcuterie lines (slow-cured Proscuitto, Pancetta and two Salames from Tuscany, plus two Yorkshire Salamis).  Of course, that kind of meat needs a first-class slicer.  I’d decided years ago that I wanted a hand-powered antique Berkel slicer.  A boys’ toy.  Finding an operational Berkel machine wasn’t easy.  In the end, after months of searching, I found an old, unworking one on offer at £600.  £600 well spent: it arrived, was promptly spruced up, cleaned, shined and fixed (including installing a new handle made from the back of an old washing machine!) and it worked like a dream.  I have to say, having experienced the wonderful Berkel in all its glory, I’d never go back to an electric slicer.  An antique Berkel can sharpen itself, auto-feeds the meat to any sliced thickness you desire and has so many nifty controls for cleaning and control, I could have done with a user-manual.  The smile on my face in the picture tells it all…

Accompaniments had to be considered – condiments and crackers were a must – just a small range of each.  Local Yorkshire Water Crackers and Chutneys (Raydale at Leyburn) were ordered.  But all the chutneys arrived with poorly-printed and wonky labels, and then my Oatcake supplier said he couldn’t get me any more before Christmas (a tiny little bakery on The Isle of Arran – Wooley’s make the best Oatcakes, but blimey they’re hard to get hold of).  So I threw a little paddy.  And when I’d calmed down, proceeded to re-label every one of the chutney jars, then beg Wooley’s to send me oatcakes to enable me to keep my sanity.

Next stop: accessories.  Just a small range on the other side of the counter.  I wasn’t having any of those French Lagioule knives.  Steel was invented in Sheffield, Yorkshire, and they still make the highest quality cutlery there, albeit without the French pizzazz: but it has the true Yorkshire practicality.  We found one of the last little mesters (cutlers who make pocket knives by hand) and bent his arm to make us special folding cheese knives for the shop.  There was a waiting time (“I’m only one man and I’ve only got a certain amount of steel”), but they eventually arrived on time!

Finally: Fondue sets (fondue is coming back, you know – get yours out of the attic and dust it down).  I wanted to sell the best designer Stockli Fondue and Raclette sets, imported directly from Switzerland.  Because they’re not available in the UK, I had to import them: not too difficult, surely? Yes… it was difficult.  After having all my bank cards stopped (sending large sums of money to Switzerland is apparently suspicious) I eventually got them ordered.  Several weeks later I received a phone call from HM Customs.  “We’ve impounded several items from Stockli Products due for delivery to The Courtyard Dairy…”  Ooops, I had no import licence, no VAT number to get one, and I wasn’t aware I was going to have to pay duty (although Switzerland has a preferential trade agreement with the UK, part of one product originated in China).  A lot of forms filled in, a bit of money handed over, and several heated discussions later – they arrived, inspected, the day before we opened.  Now I just had to stay-up all night fitting plug converters!

With the stock and fittings sorted, it was time to chill down the cheese shop – I was going to have to put a condenser unit outside for heat exchange.  Little did I realise I was in the Yorkshire Dales National Park.  Only by 20 metres.  But that 20 metres was enough to ensure the planning laws became Draconian.  20 metres away, on the other side of the fence, and I could pretty much have done what I wanted.  And, although I was sandwiched between a railway line and main road, I couldn’t put my condenser outside unscreened, and not even if screened with an attractive wood fence.  Several hair pulling-out days later and planning permission was at last applied for.  I am now building a rather expensive natural stone wall just to screen the condenser from view of the passengers on the railway.

Almost done, I just needed to sort out what refrigeration I was going to use – one of the most important bits really…