~ Order now and choose your own delivery date at checkout ~ FREE delivery when you spend £55 ~
Home Learn About Cheese Cheese Musings & Tips Rennet: what is the difference between vegetarian and animal rennet?
Show Sub-menu 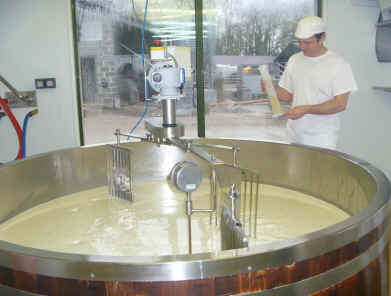 Vegetarian cheese is everywhere: pretty much every block of cheese you pick up in the UK will be made with vegetarian microbial rennet. Now I’m all for equal rights and all that but the whole issue is a bit of paradox to me.  So if all cheese isn’t vegetarian – where does rennet come from?

So we’d best start from the top, let’s define ‘traditional’ animal rennet – what is it and what does it do?

Rennet is an essential part of the cheese making process (only very fresh, fragile curd cheeses can be made without it). It is used to coagulate the milk and set it into jelly (Sam Holden is pictured here adding liquid rennet to the vat).

It was probably discovered by accident when animal stomachs were used as vessels to store and transport milk in ancient times. (Click here if you want to know the science bit about how rennet coagulates milk.)

Animal rennet is an enzyme obtained from the fourth stomach of an unweaned calf (this can include veal calves, or even lamb and kid) but is nowadays available in a liquid form (though some still traditional producers – e.g. Beaufort – still use strips of dried stomach).

Why can it only come from young unweaned calves? Because at that stage in their life they’ve only consumed milk, so the natural enzyme for coagulating milk (chymosin) is present in large quantities. As the calves get older the amount of chymosin reduces and other enzymes take its place (those necessary for digesting other foodstuffs). This is why you can get various quality grades of rennet depending on how much chymosin is present: 100% chymosin from a young unweaned calf is the Cadillac of rennets.

Killing a young calf for its stomach? Isn’t that cruel?

Unfortunately, it is a cruel reality of the dairy industry: “The Achilles heel of Dairying”.

Think about it… for dairy farms to have constant milk supply, their animals must have offspring yearly. Naturally not all these offspring can be kept (otherwise there’d be an exponential population growth) and some of these calves are also unusable (male diary calves by the nature of breeding don’t produce the required quality or quantity of meat, although some diary farmers are now trying to use them for rose veal).

This is the paradox of the dairy industry: in order to have milk, many young calves are killed every year. So it

is economic to use the stomach linings of these animals for rennet, bearing in mind that even if there were no demand for rennet, these animals would still be slaughtered.  As rennet manufacturer BioRen says, “A YES to milk and milk products logically also means a clear YES to the use of natural rennet.”

So what is vegetarian microbial rennet?

With the advent of mass-produced cheese in the 80’s supermarkets found that they could provide for a larger market using vegetarian rennet. This was coupled at the time with problems sourcing quality calves rennet (problems which still exist to this day: Sam Holden of Hafod Cheese sources his rennet from New Zealand Calves – New Zealand doesn’t have a white veal industry so the welfare standard for calves is higher and they are slaughtered younger meaning the rennet is higher quality).

a) Some moulds (e.g. Rhizomucor miehei) are able to produce protelotic enzymes similar to rennet. By fermenting these moulds in a laboratory before concentrating and purifying them a vegetarian substitute called Microbial Rennet can be manufactured. Microbial Rennet is the most common rennet in the UK.

b) Alternatively, organisms (such as yeast, bacteria or mould) have been genetically modified to secrete the rennet enzyme ‘Chymosin’.

Therefore vegetarian rennet in general (see the exception to the rule below!) is really neither natural nor traditional and many believe it also doesn’t produce as good a depth of flavour (have a read of Patrick McGuigan’s notes here and Andy at Handyface carried out some interesting home experiments.

There is some evidence that using Microbial Rennet for aged cheeses may be one factor that contributes to bitterness and lower yields. Although it is worth pointing out rennet manufacturers have worked (and continue to work) to resolve issues like this, or have developed other methods of manufacture to cover these defects in the final cheese (such as balancing with sweetness). There are also some mighty fine artisan vegetarian rennet cheeses: Old Winchester, Cotherstone and Lanark Blue to name a few.

Personally, I prefer ‘traditional’ rennet cheeses as I feel rennet produces a better cheese (and is one of the reasons many AOC / Protected cheeses cannot use vegetarian rennet, e.g. Parmesan, Brie de Meaux, Roquefort); it is a more traditional way of operating, and it is an economic use of the calves. Thankfully more and more artisan producers are using traditional rennet.

Vegetable Rennet: the exception to the rule.

Some plants naturally contain some of the protelotic qualities needed to coagulate milk. In general they don’t really work that well and that’s why they’re not used (apparently even nettles were used in olden days).

Yet in parts of Spain and Portugal the Cardoon thistle is (traditionally) used as rennet***. This thistle rennet works quite well, producing a very distinctive texture and flavour: the stamens are ground before being infused in warm water, which is then added to the milk in the same way as rennet. (Mary Holbrook’s farm near Bath also uses thistle Cardoon rennet for her characteristic Tiley and Cardo).  Cardoon thistle rennet works well with goats’ and sheep’s milk, but with cows’ milk it producers a very bitter cheese caused by the way it reacts with the proteins.