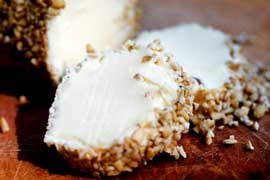 In 1972, the Scottish Farmhouse Cheese-makers Trophy was discontinued, as there had been only one entrant in six years: a certain Mr Finlay. Even he gave up making cheese in 1974, and it looked like Scottish farmhouse cheese making had disappeared forever.

A similar trend was being echoed throughout the UK, as farmers gave up making cheese through pressure from the Milk Marketing Board and a lack of demand for true farmhouse cheese.

Traditional Scottish cheese had always differed from that of England and Wales, as the Roman’s never invaded Scotland and spread their cheese-making techniques. Scottish cheeses tend to be more Celtic in origin: weak-bodied acidic cheeses such as cottage cheese. 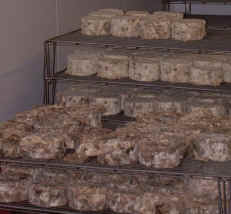 example is pictured) and Crowdie (acidified skimmed milk). With industrialisation and the blurring of boundaries, Scotland also became noted for other cheeses such as Dunlop, a similar cheese to Cheddar. Alongside this, many farmhouse varieties sprung up, including a number of sheep’s milk cheeses. Slowly but surely, however, as with the decline of British cheese, they disappeared from existence and it seemed like Scottish farmhouse cheese had gone forever.

But things would change.

The early 1980s saw a revival, as some farmers returned to cheese making. New producers making quality artisan cheese started to arise. Slowly but surely the movement gained momentum and more and more farmers joined the fold, so that some of these farmhouse cheeses can now take pride of place at The Courtyard Dairy.

Three Scottish cheeses definitely worth looking out for are:

(if there is any missing – please let me know!)

Have a look at the Scottish cheeses available from The Coutryard Dairy online here.