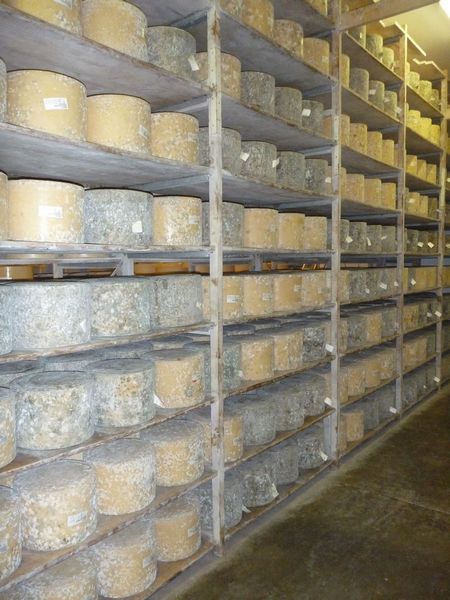 The traditional British Cheese types are often called the ‘territorials’; as they take name from the counties or areas where they come from.  In the last 100 years they have broadly evolved into two distinct styles – the ‘crumblies’, which include the fresher, crumbly cheese types of Lancashire, Cheshire, Wensleydale (and any ‘dale’ type), plus Caerphilly.  These are fresher, sold younger and have simpler more approachable flavours.  Being quick to make and mature, they were cheaper to produce and became the cheese of choice for the working classes in the industrial north, and the mining communities in Wales.  Even today these cheeses are sold in much greater quantities in the northern counties.

Then there were the cheeses of the south, made with a firmer, supple texture (with a characteristic snap when you break it), often aged longer and tasting less fresh and more rounded: Cheddar, Gloucester, Red Leicester, Worcester, Derbyshire.

Developing over hundreds of years these cheeses now tend to be based on a fairly similar recipe and production technique, with only slight alterations in how the curd is acidified creating the different cheese types.  These techniques were refined in the 1800s by dairy consultants such as the famous Joseph Harding, and the refined techniques spread thereafter throughout the UK.  Prior to this industrialisation and standardisation of cheese-making, there would have been greater variety in the territorial cheeses.  Wensleydale, for example, was a sheep’s milk spreadable blue, Cheshire was blue and moist, and Cheddar was described as “spongy with eyes filled with rich oil”!

As the recipes became refined, Government standards (called ‘grading’) for the different territorials came to be recognised, and, although there is no protection for how these cheeses should taste or even where they should be made (other than trading standard regulations for moisture content), the legacy of the grading schemes means that we now come to expect ‘territorial’ cheeses to be of certain style.  Taking the earlier example, Wensleydale, the expectation now is a cheese that is crumbly, zesty and fresh.  An older version has been re-invented though – if you taste Kit Calvert Wensleydale (reputed to be made following an older recipe) you’ll find it’s different from what is normally expected nowadays, but not quite a sheeps milk spreadable blue!

These expected characteristics of each type of cheese (flavour, texture and body, colour andage)  are usefully detailed in this blog: Traditional British Territorial Cheeses – their characteristics