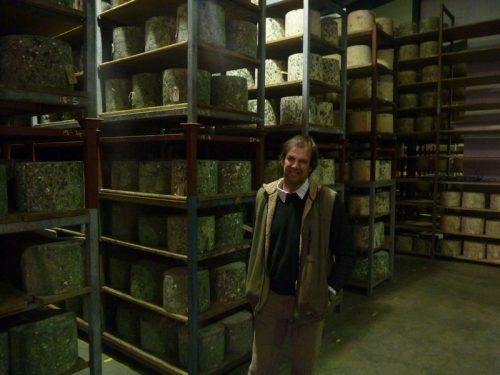 September 29th 1998.  10 days before the British Cheese Awards results are released.  Will Montgomery’s Cheddar win ‘Best Cheddar’ and ‘Best Traditional British Cheese’ for the third year on the trot.

And then the unthinkable happens. That night under the cover of darkness 275 of Montgomery’s finest cheddar truckles go missing.  6 tonnes.  £35,000 worth of stock.  And no insurance.

The rumours start: a jealous competitor? An inside job?  But why would anyone steal a product so unique, so traceable?  Any cheesemonger can tell Montgomery’s Cheddar with it’s cloth off.  It has a unique look, it’s impossible to hide. “It’s not the sort of thing you can just get rid of, is it?”

Within in a day it’s in all the national newspapers.  Instantly the products become ‘hot’.  Jamie Montgomery offers a £2000 reward.

He follows the trail, easy in the small world of cheese in the UK.  The thieves offer the cheese to some block cheese cutters down South.  They refuse; they wouldn’t even take it normally…  Montgomery’s is too unique, blue, mitey, dry.  It’s a farmhouse cheddar.

The cheeses are then offered to a dealer up North for £3000.  He offers to take it just to return to Jamie.  But they smell a rat and are not heard of again.

The cheeses disappear and as does the case.  We will never know who stole it, why, or it ended up.  Rumour has it unable to shift it the thieves eventually managed to sell it for grating for a measly £2 a cheese.

But we forget about the damage to Montgomery’s: with £35,000 of cheese missing and unable to capitalise on the British Cheese Awards, it would be difficult times ahead.  Or so you’d think.  Jamie smiles “It’s not often you get £2 million worth of publicity for £35,000!”  The newspapers reporting had made it, an already well-known cheese, famous overnight.  The phones didn’t stop ringing; in response to demand Jamie Montgomery upped his price and covered the £35,000 loss that year.

As Juliett Harbutt, creator of the British Cheese Awards said, “We couldn’t have done it better if we’d nicked the cheeses ourselves.”