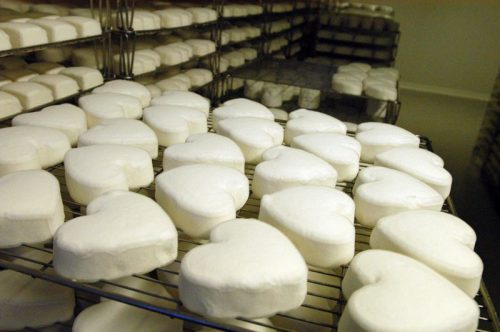 Contrary to popular belief, heart-shaped cheeses are not a recent invention for the Valentine’s Day bandwagon, but originated over 500 years ago.

Normandy has always been famous for its soft sumptuous cheeses – the lush pastures and rich milk of the Normande breed of cow, along with the cool and humid terroir, provides ideal conditions for the likes of Camembert, Pont L’ Eveque and Livarot. Neufchatel, a soft, white, moulded cheese, has always remained less well known than its more popular cousins, yet its origins can be traced back to the 10th century.

Sandwiched between the industrial towns of Dieppe, Le Havre and Rouen, the sleepy town of Neufchatel (in the Haute Normandy region, Pays de Bray) is where this cheese comes from. It wasn’t originally heart shaped, however, and although the heart-shaped design wasn’t invented for St. Valentine’s Day, it did come about through love…During the Hundred Years’ War (1337 – 1453), the French dairymaids of Neufchatel naturally fell for their English occupiers.

Consequently they started to mould the cheese into a heart shape to give as gifts. Ever since then the cheese of Neufchatel has become known for its characteristic heart shape, its bloomy white rind, and its velvety creamy interior, although it can still be found in other shapes (obviously from the French Dairy maids that failed to swoon over the English soldiers…)

Neufchatel can be an amazing cheese – velvety rich crust off set by a tart lactic interior. But beware: at Valentine’s Day it is not always at its best – too much demand means younger, undeveloped cheeses, and the Normande cows are not yet out at pasture to give the best milk – save buying the Neufchatel cheese until mid-summer! (The cheese-makers will thank you for it as well – they don’t want only to sell their cheeses on one day a year!). 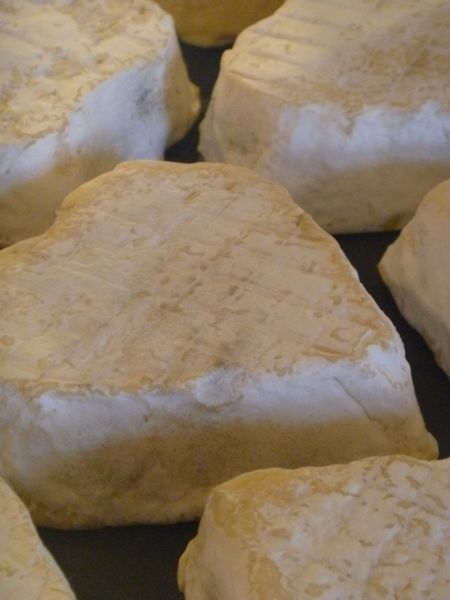 For those interested in the technical details of traditional Neufchatel-en-Bray: it is a very slow acidifying and draining curd (circa 24 hours lactic acidification, longer in the cooler winter) with minimum addition of rennet. Tradition suggests you must add one of the previous day’s cheeses back into today’s curd (a practice that now rarely happens, but would have been done to propagate the correct mould and bacteria). After pre-draining, it is moulded into its various shapes and is salted and left to dry. It is then moved to the ageing rooms, which are kept at about 12 degrees Celsius and the correct humidity to allow the Penicillium candidum/camemberti (white mould) to grow.

I once met one of the last fermier (farmhouse) producers of Neufchatel. He paints his storerooms every year, but always leaves one corner unpainted, so the mould can re-propagate itself into the room! Neufchatel can be sold from ten days old, but is more commonly found a bit more mature at 3-4 weeks, having a thicker, bloomier rind than Camembert and a more tart interior.

mould their cheeses into a heart shaped form for a seasonal cheeseboard:

Dorstone. One of Britain’s most outstanding goats’ milk cheeses. Made in a French lactic-style it is mousse like, lemony-fresh with a hint of goat flavour. Goats’ milk, unpasteurised.

Finn. A triple-cream cheese: extra cream is added to the milk before making the cheese, ensuring it is rich, fresh and delectable. Cows’ milk, unpasteurised.

Little Heart (Little Anne).  Made using traditional techniques, the slow ‘make’ and hand-ladling has created a small lactic cheese that is yeasty and fresh; a delight to eat.  Cows’ milk, unpasteurised.

We offer these cheeses to buy in the Valentine’s Cheese Selection here, or click here to view a complete list of Valentine’s Day cheese gifts.