~ Order now and choose your own delivery date at checkout ~ FREE delivery when you spend £55 ~
Home Learn About Cheese Cheese Musings & Tips Unpasteurised v. Pasteurised cheese – what are the differences?
Show Sub-menu 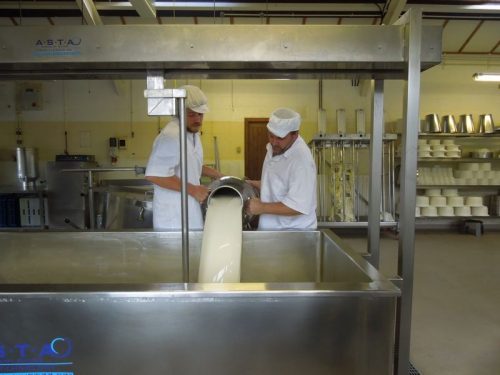 Along with most people, you’re unlikely to have realised that you’ve probably been eating unpasteurised cheese most of your life.  Parmesan, for example, is always made with unpasteurised milk (the Italian decree insists on it), as is Swiss Gruyère, Roquefort, Comté… the list goes on.

Some cheese professionals will lecture you on how unpasteurised (or raw-milk) cheeses are brilliant and can’t be beaten.  Ask another, however, and he might say pasteurisation is best and that unpasteurised cheeses aren’t safe at all.  Neither of these is a balanced view.

The cheesemongers at The Courtyard Dairy like to champion ‘real’ cheese, made on the farm, and, where possible, from unpasteurised milk.  But simply using unpasteurised milk is not an accurate pre-determiner of quality.

So what is the difference between cheeses made with raw and pasteurised milk?  And why do people come down so firmly on either side of the fence?

Pasteurisation involves heating the milk in order to kill pathogenic (and any unwanted) bacteria that may taint the flavour or, in the worst case, harm the eventual consumer.  The most common way is to heat the milk to 72 degrees Celsius for 15 seconds but it can also be done by heating to 63 degrees Celsius for 30 minutes.  In our modern world, large commercial farms are herding and milking great quantities of animals, looking after and feeding them in the most economic way in order to reduce costs.  This, coupled with the fact that milk is often collected from hundreds of farms only every two to three days, means that the ‘anonymous’ mass of milk for processing pretty much has to be pasteurised.  Quite simply, the inputs aren’t controllable enough.

For large-scale producers of cheese, pasteurisation also helps as part of their process to ‘standardise’ their inputs, killing any natural microflora (which in small-scale cheese-making could be used to make the cheese).  To counter the fact that the natural bacteria needed for cheese-making have been removed, the producers then add back specific bacterial cultures and flavour adjuncts.  These bacteria will have been selected specifically to make the cheese taste exactly the same, day after day.  Which is exactly what you want for a piece of block-Cheddar.

Andy Swinscoe, of The Courtyard Dairy, would not like to see large-scale cheese producers making unpasteurised cheese because it would be so difficult for them to control their milk quality, which means that they couldn’t produce the standardised consistent cheese demanded by the mass market.

The negatives of using unpasteurised milk for large-scale cheese-making become, however, positives for small-scale cheese making, which has much greater control over its inputs.  Most of the farms Andy works with have just 50-70 cows and use their own fresh milk from their herd every day to make cheese.  These producers are trying to create a quality, premium product that they are proud to put their name on.  That’s why they take animal husbandry, good feed, sanitary milking practices and dairy hygiene very seriously (to be fair, this applies whether they pasteurise their milk or not).  With direct control over these inputs “the farmhouse cheese-maker should not normally need to have recourse to pasteurisation” stated Davis, author of the famous book ‘Cheese’, published in 1965.  Indeed the Specialist Cheese-maker Association recommends that to make unpasteurised cheese it is best if you are using milk from your own, preferably closed, herd.

What are the benefits of leaving the milk unpasteurised? 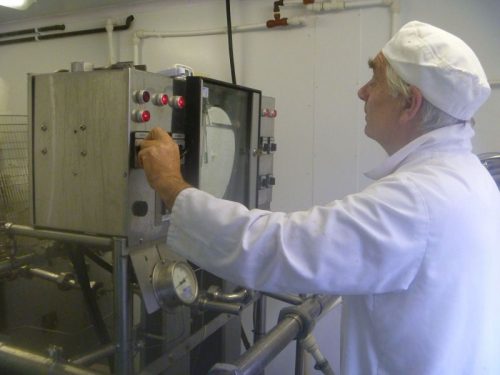 Unpasteurised milk is ‘raw milk’, and some people prefer this term because it doesn’t insinuate that something hasn’t been done.  What it does mean is that all the bacteria and microflora are left in the milk.  These bacteria will be natural and the mix will be unique to any particular farm.  This means that it can be harnessed potentially to create a unique cheese that has a character and taste profile of its own and which will vary seasonally with climate, temperature, feed, etc.  These cheeses can be unique and impossible to copy – a real expression of the ‘terroir’ of an individual farm.  Naturally, this also means that to make unique unpasteurised cheeses the producer needs to be small-scale and at the top of their game in terms of cheese making and farming.  Which is why the cheesemongers at The Courtyard Dairy support and encourage them.

Well, it’s not that simple, because even though cheeses made with raw milk should be better quality because the internal microflora adds flavour to the cheese, sometimes this is not the case.  For example, even if the steak on your plate came originally from the best quality Hereford bull, there is still a lot that can happen to spoil its flavour before it is served up.  The same applies to unpasteurised cheese, so it’s wrong to say that ‘unpasteurised cheese’ always means ‘better cheese’.  Using raw milk is one of many factors that go into making a great cheese with potential for superior flavour, but the other factors can often have equal or greater importance (the skill of the cheese-maker being a key one of these).

Some makers of unpasteurised cheeses, for example, will add other cultures in the same way as the cheese-maker using pasteurised milk, maybe to cover up unwelcome nuances in their milk.  And there are plenty of first-class cheese-makers making absolutely fabulous pasteurised cheese that is hard to beat, although these are usually small-scale farms and creameries (e.g. Old Winchester and Killeen).  Finally, even amongst those farmers that would prefer to use raw milk, there are some that are prevented by law because of the prevalence of TB in their area.

So whereas using raw milk to make cheese is something to recognise and something the cheesemongers at The Courtyard Dairy support and encourage – it is certainly not the be-all-and-end-all. 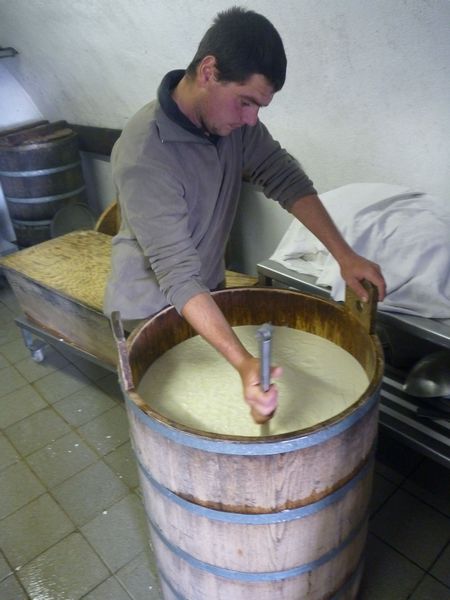 Should you be worried about how safe it is to eat unpasteurised cheese?

The simple answer is no.  There is nothing harmful about raw milk cheese.  Cheese making is designed to take a product that spoils quickly (milk) and make it suitable for storing for a long time.  In order to do that there are several steps which help to make cheese ‘safe’.  Any cheese not considered safe and not meeting legal requirements is not released for sale.  Cheese-makers, Local Authorities (EHOs) and the Specialist Cheese-makers Association have worked long and hard to eliminate the risks in making cheese and to encourage responsibly made raw-milk cheese.  The farmers using raw milk are small scale, have a need to keep their farm alive, and strictly control their inputs, knowing their animals, feed and milking/cheese-making practices.  All this goes towards making a product that tastes its very best and is also safe to eat.  They see it as their duty.

Cheese making makes milk safe in several ways.  The first crucial step is acidifying the milk (using ‘good’ bacteria), which makes the milk more acid, preventing potentially harmful bacteria from surviving.  Some cheeses have fast acidifications, others go very acid; both provide ‘critical control points’ helping to make the cheese safe.  Other cheeses are made to be aged a long time and have such a low moisture content that harmful bacteria cannot survive (e.g. Parmesan).  This is why really hard cheese like Parmesan is safe regardless of pasteurisation – and suitable for pregnant ladies (official NHS advice).  Higher-risk cheeses are those that have high pH (not very acid) and high moisture contents, such as soft, mould-ripened cheeses like Brie, Camembert and Gorgonzola, and washed-rind cheeses.

Two separate analyses of pasteurised and unpasteurised cheese by Public Health England (in 2004/5) found that of all the cheese sampled there was no difference in the amount of cheese that was found to be unsatisfactory between those made with pasteurised and those made with unpasteurised milk.  They each posed the same risk.  Another journal review found that heat-treating milk (i.e. pasteurising) did not statistically make cheese lower risk from pathogenic bacteria.  (Also note that some would argue that encouraging a large number of microflora in unpasteurised milk actually increases safety because of the increased competition for resources.)

So does unpasteurised cheese go off faster if it’s full of all this bacteria?

No, pasteurisation, or lack of it, does not affect the ‘keeping’ qualities of cheese.

Cheese that is designed to be aged has little moisture content, and since bacteria and mould need food and water resources to survive, what affects how fast cheese goes off is how dry the cheese is (how much of the moisture has been removed from the milk/curd as part of the cheese-making process).  Hence unpasteurised Cheddar and Parmesan (with low moisture content) will keep longer than pasteurised Brie (with high moisture content).

Can you buy raw-milk to drink, then? 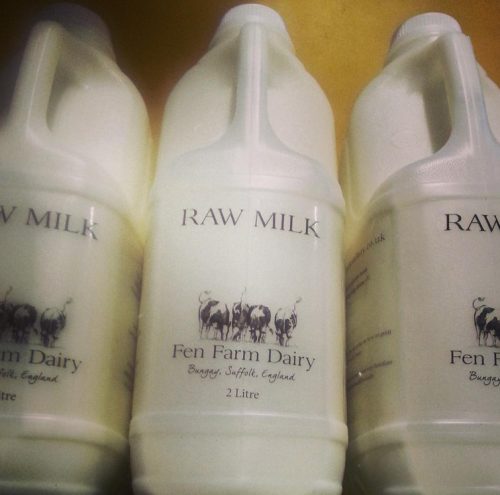 Yes, the sale of raw milk in its liquid form is allowed ‘direct from farm’ In England and Wales.  Many milk producers have been through a number of battles with the Government as it makes occasional attempts to outlaw the selling of raw milk; as the law stands at present, raw milk must carry a health warning similar to cigarettes –although drinking water is statistically more hazardous!  That is not to say all milk should be sold unpasteurised.  Because it is at its safest when fresh, direct from a small farm where animal care and husbandry is of vital importance, that means it’s not suitable for mass production.  The Courtyard Dairy supports the sale of raw milk but would not like to see it liberalised.

As a side note, it is interesting that some larger producers, such as Reo (Camembert) and Dongé (Brie de Meaux), have scaled up unpasteurised cheese-making to a large artisan scale by effectively mimicking the smaller producers – only working with small diary farms, visiting and monitoring them during each milking, collecting milk every day, and paying them an extreme premium.  They take the attitude that the farmers milking and farming practices are of vital importance in the production chain.

Read about the different Lancashire cheeses: crumbly, creamy and tasty.  Find out more about how they came about and what makes them taste so different!