Goats are pretty much the first animal that was ever domesticated (about 9,000 years ago in what is now Iran), and the first cheeses to be made were from their milk (cheese from goats’ milk has been found in Egypt from as far back as 5,000 years ago) – in fact there was even some in Tutankhamun’s tomb.

To this day goats are often the primary source of milk and cheese in rural communities throughout the world. India is the biggest goats’ cheese making country by volume in the world, and pretty much all domesticated breeds of goat originate from the Middle East. Goats are useful as they can survive in all types of conditions with minimal food (think of them of grazing on arid mountain sides in the Middle East – indeed some goat breeds can survive 3-4 days without water).

Despite this world popularity, many people think goats and goats’ milk are not something which is historically associated with the UK … but they are wrong.

The history of goats’ milk and cheese in the UK 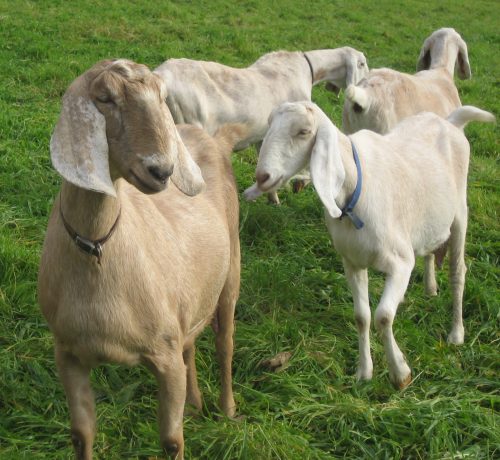 You’ll often here it trotted out (pardon the pun) that goats aren’t native to the UK and can’t cope with the climate and weather here. People also often suggest that the propensity of goats’ milk cheeses in France and southern Europe is primarily as a result of the Saracens invading southern Europe in the 8th Century and bringing their goats with them from Africa and the Middle East.
The popular legend has it that when the invading Arab army was defeated at the Loire Valley in France, they left behind the goats they had brought with them. The French like to tell the story that when retreating the invaders had to choose between taking with them their goats or their wives. Choosing their wives, they left behind the goats, giving France the opportunity to be at the forefront of goats’ cheese making.). Many cheesemongers often say this is why historically there were no goats and goats’ cheeses in northern Europe and Britain, adding that goats are not well adapted to cold and humid conditions prevalent in those areas.
Unfortunately none of this is true. Certainly, the Saracen invasion did bring more goats into France (and no-doubt helped establish the Loire Valley as one of the centres of quality goats cheese-making), but there were already goats throughout Europe, including in the UK. Neolithic settlers brought goats over to the UK for their milk and to eat several thousand years before the Saracens invaded (about the time the wheel was being invented and Stonehenge was built). 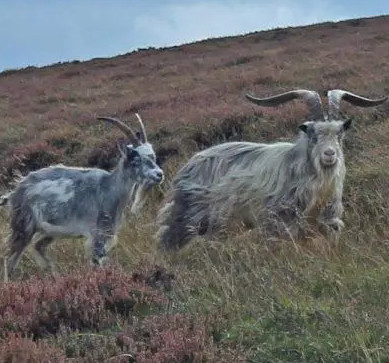 In fact to this day there are wild goats to be found living native in the UK (in Snowdonia, Devon and the Cheviot Goats in Northumberland – pictured, for example). These feral goats are descended from the original populations that escaped from Neolithic herders 5,000 years ago. They cope pretty well with the climate and live outdoors all year round, and the modern British Anglo Nubian breed is said to descend from them.

From then on throughout Celtic times, Viking invasions and even into the Middle Ages, keeping goats was the preserve of the peasant or smallholder farmer. Goats became a popular and vital source of milk and finance to rural areas in the UK. Nicknamed the ‘Poor Persons cow’ because they were able to live off not much forage from rough scrubland (eating leaves, twigs and weeds), they produced a small volume of milk (two to four litres a day) which was suitable for a household. They are also reasonably easy to handle (compared with the much larger cow) and quite efficient – for example, a goat produces more milk per amount of feed eaten than a cow), and can be milked for a long period (two or more years) without being put into ‘kid’.
Keeping goats was a way of feeding a family using the ‘common’ land and their lot. The old English goats naturally adapted to the British climate with great constitution and hardiness.

And although there is a little documented evidence that goats’ cheese was made in the UK, it almost certainly was because of the sheer number of goats being milked. The reason for the lack of record is probably because goats produce less milk and were often kept just for the household. There was little surplus milk to turn into cheese, and what little goats cheese that was made would most likely have been consumed by the family and not sold. It was the peasants’ food after all!
Compare that to the bigger herds of sheep (kept originally for wool) and cows particularly kept by Monasteries and larger landholders in the fertile flat lands of Cheshire and Somerset. The volume of milk from these bigger animals and herds would have led to them making cheese as an efficient way of preserving all the excess milk and making it stable and easily transportable for sale. Hence cheese-making from cows’ and sheep’s milk became prevalent and well documented.

So why and when did goats’ milk and goats’ cheese become uncommon in the UK?

Even now, compared with its cow counterpart, goats’ cheese is relatively rare and uncommon sight on a cheeseboard in the UK– very different from what is expected on a French cheeseboard: “A cheese tray worth of the name cannot be truly complete without the addition of a goats’ cheese” (the words of famous French cheese consultant La Jaouen.)

The Enclosure Act and the Highland Clearances from the 1700s onwards led to goat dairying in the UK pretty much dying out. There followed a change in Britain’s farming traditions, as small peasant farmers keeping goats on common land for milk and meat disappeared, giving way to landowners farming larger cow dairy herds ‘more efficiently’ in enclosed fields. Britain’s goat milking tradition was lost and almost forgotten… until the mid to late twentieth century.

It was in the 1970s that the usefulness of goats when setting up a small holding, coupled with restrictive milk quotas on cows’-milk production, saw a return of goats being milked in the UK. However the goats brought into the UK tended to be those that had been commercially bred and refined for milking, unlike the native ‘dual’ purpose breeds of old. 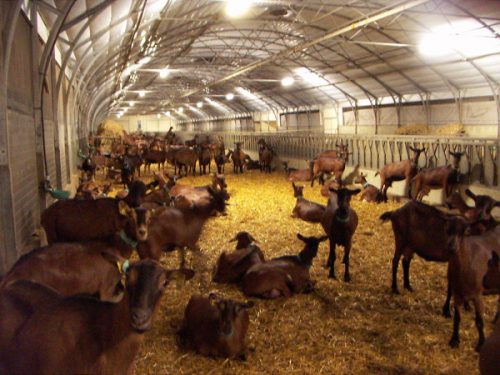 Switzerland had led the way in breeding dairy goats, and is responsible for the main dairy goat breeds we see today: the Saanen (pure white – and its stately appearance earns it the nickname the ‘Queen of Dairy Goats’), Alpine and Toggenburg. These modern breeds are less hardy and less suited to the British climate. Coupled with their propensity to be master escape artists from any field (destroying dry stone walls in the process!) and to nibble everything in sight (goats are browsers when they eat, preferring to pick and choose their way through forage rather than graze a field down*), this means they are more often kept indoors nowadays.

In fact, in Britain around 90% of dairy goat herds are kept indoors (when was the last time you saw a goat in a field?) Grazing is practically non-existent in commercial British goat farms, which on average house 700-1000 goats with space to roam indoors. On the continent outdoor grazing is quite often on goat herding hillsides without fencing – different from the enclosed style of British agriculture since the 1700s.
The average goat herd size on farms in the UK that graze their goats outside is about 30 goats, which suggests those allowing goats out to pasture are mainly smallholders and hobbyists.
By the way, the goats that produce the milk for The Courtyard Dairy’s Sinodun Hill and Hebden Goat cheeses all graze outdoors – a rarity.

(*Goats are also very susceptible to parasites that you get closer to the ground, so are difficult to manage in ‘tight’ outdoor grazing systems.)

Read on in part two to find out:

Find out more fascinating facts about cheese – simply sign up to The Courtyard Dairy’s monthly newsletter for regular exciting offers and interesting info from the cheese-world.  Sign up here.

Why do goats’ cheeses taste ‘goaty’? And why are some stronger than others?

Many people have been put off for life by tasting a really-ripe goats’ cheese – saying it is ‘like licking a goat’! But contrary to popular opinion, goats’ milk doesn’t…

What is the difference between goats’ milk (and cheese) compared to cows’ and sheep’s?

Each mammal produces slightly different milk. Although the constituents are broadly the same (water, lactose sugar, fat, protein, minerals and nutrients) the exact make up of each milk varies, depending…

New cheese-makers on the block, Rachel and Fraser make Sinodun Hill goats’s milk cheese on their farm near Henley-on-Thames in Oxfordshire. Andy interviewed them to find out what makes these…

Making Charolais Goats Cheese: a visit to a farmhouse maker

I drove up into the mountains of Beaujolais, and as the sun rose, my enthusiasm for seeing this cheese grew. I was visiting Isabelle and Jacques. Daily, for almost all…