~ Order now and choose your own delivery date at checkout ~ FREE delivery when you spend £55 ~
Home Learn About Cheese Cheese Musings & Tips What are the crunchy crystals found in hard cheese?
Show Sub-menu

What are the crunchy crystals found in hard cheese?

Well, if you thought it was table salt, you’d be wrong! 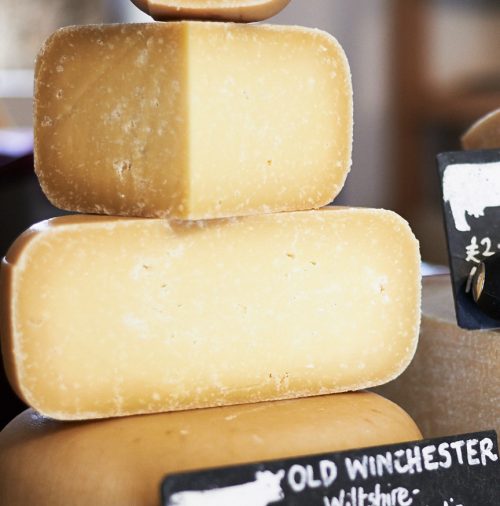 We do know what causes the crystalline white deposits found within hard cheeses. It isn’t common salt, and in fact you could say that what the crystals are really made of is not too exciting, but it is of interest to those who have an enquiring mind!

The majority of what we find nowadays as crystals in hard cheese is amino acids (most commonly Tyrosine and sometimes Leucine) that have come about from protein breakdown. Protein is naturally found in the milk (and, therefore, the cheese). This protein is slowly broken down as the cheese ages, and in some cases it breaks down to form the aforementioned specific amino acids, Tyrosine and Leucine. Believe it or not, these amino acids move about slowly within the paste of cheese and when enough of them bump into each other, which happens occasionally, and only occasionally, they will join together. This causes a tiny crystal to start (the ‘nucleation site’) and slowly more amino acids join in, so the crystal grows.

Although not contributing to flavour these amino acids do contribute to texture, giving hard cheeses a pleasant ‘crunch’. The reason they are often associated with saltier mature cheeses is that they only form in cheese in which the protein has sufficiently broken down to form crystals (in other words, a cheese that has matured for longer and is thus often stronger in flavour, dryer and saltier).

Some of the bacteria that are added to make the cheese, and some methods of production, increase the chance of these crystals forming. This means that the crystals are most commonly found in continental styles of cheese like an aged Gouda, Gruyère, Comté or Parmesan. In recent years, however, there has been an increase in British, American and Canadian Cheddar producers using such production methods and bacteria (notably a culture called Helveticus), so that mature Cheddars are also exhibiting the crystals and the associated sweet flavour from this

culture – but historically this was not the case!

Sometimes a white deposit can form on Cheddar, particularly on the outside of the block vacuum-packed variety, where the moisture and temperature are more difficult to regulate. This white deposit can form in streaks or a haze, which is considered undesirable because it looks unpleasant, although it has no impact on taste. This crystal is, however, slightly different from the amino-acid variety. It is Calcium Lactate, formed by the lactic acid in cheese combining with calcium. Again, this happens only in fully aged, mature cheeses. Although this Calcium Lactate crystal is still found in cheese, the most commonly desired crystal and the one that is encouraged is that of the ‘Tyrosine’ amino acid.

An interview with Mike Smales: farmer and maker of Old Winchester cheese

Tell us briefly about your business and your career. We have been milking cows here (starting with just 3!) since 1952, on the tenancy farm we obtained. The farm has…