~ Order now and choose your own delivery date at checkout ~ FREE delivery when you spend £55 ~
Home Learn About Cheese Cheese Musings & Tips What is the blue veining in traditional Cheddar? And can I eat it?
Show Sub-menu 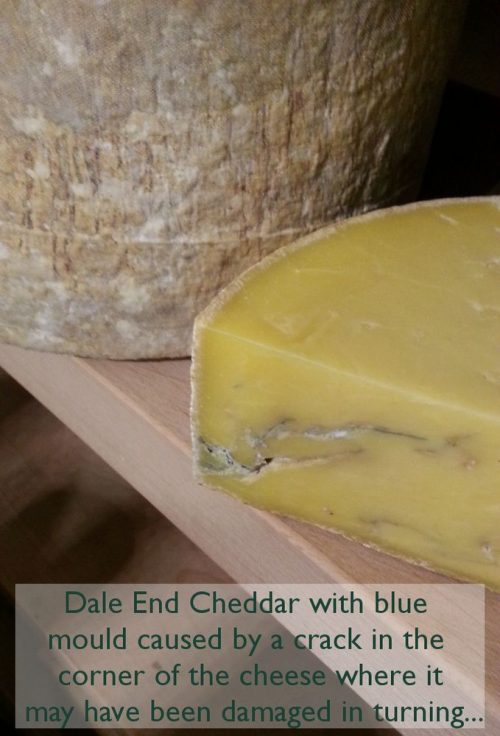 I’m often asked if the natural blue vein that finds its way into non-blue cheese is edible.  The answer is: by and large, yes.  This is how blue cheese would originally have been discovered (I have some 19th century grading books which list Wensleydale only as a blue cheese – which would have been completely natural).  Some cheeses, such as the ancient Bleu de Termignon, are still made to encourage this natural vein development and that is what makes their cheese unique and very interesting.

Natural blueing was a more common occurrence in the olden days before the introduction of efficient pressing, the forming of better rinds (by for instance, using cheese cloths inside the moulds) and the more consistent acidification profiles we see today in cheese making.  Cheeses with open textures and weak bodies, like Wensleydale and Cheshire, were and are particularly susceptible to blueing (naturally blue Cheshire was actually a sought-after cheese called Green Fade).  The blue mould would be the result of defects and damage to the rind.

The mould that causes blueing is usually one of the penicillium genus (such as p. roqueforti and p. 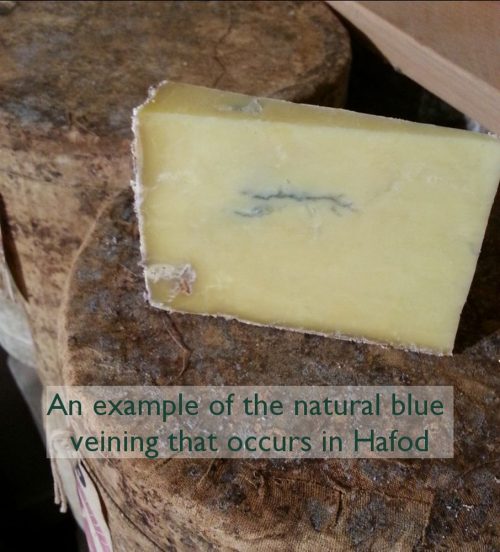 glaucum), although there may be other moulds and yeasts around the defect.  Penicillium is salt- and acid-resistant and as such is pretty resilient and will grow in the majority of conditions (for example it happily grows on both brined food and lemons).

Although this unrefined natural blue mould is usually different from the refined strains of mould that have taken modern cheese-makers years to develop in the search for certain flavours, textures, breakdown and development (where the selected specific strain of mould is artificially added) it will influence the cheese in similar ways and often produce interesting flavours. 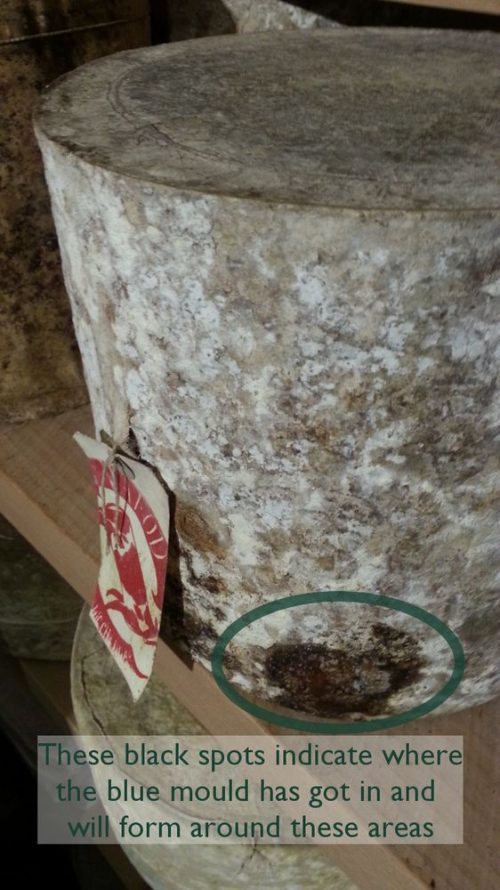 And like the refined moulds, natural mould on cheese is not normally a danger to health because moulds present in cheese do not produce the same mycotoxins that they can produce in other foods, for reasons attributed to conditions created by the lactic acid bacteria, pH and water activity found in cheese (Williams and Neaves).

In this modern age, however, natural blueing is mostly considered a defect and is likely to be rejected or cut out of the cheese.  Most cheese-makers seek to reduce it to a minimum.  Holden Farm Dairy of Hafod Cheddar, for example, in an effort to reduce natural blueing, is investigating the cause.  They have experimented with changing the wrapping cloth and the number of layers of cloth, and are larding less in an effort to reduce excessive moisture which could be causing their blueing.  Most traditional Cheddar makers remove moisture earlier and will lard then / cloth more in order to reduce the chance of blue mould getting in; Jamie Montgomery was convinced the mould made its way in from the corners, which would crack as they came out of the moulds due to the surface tension caused by shaking out such a large cheese… the larger 25kg cheddar truckles do seem to be affected more.

Personally I find natural blueing interesting: something unusual to talk about and taste with customers – 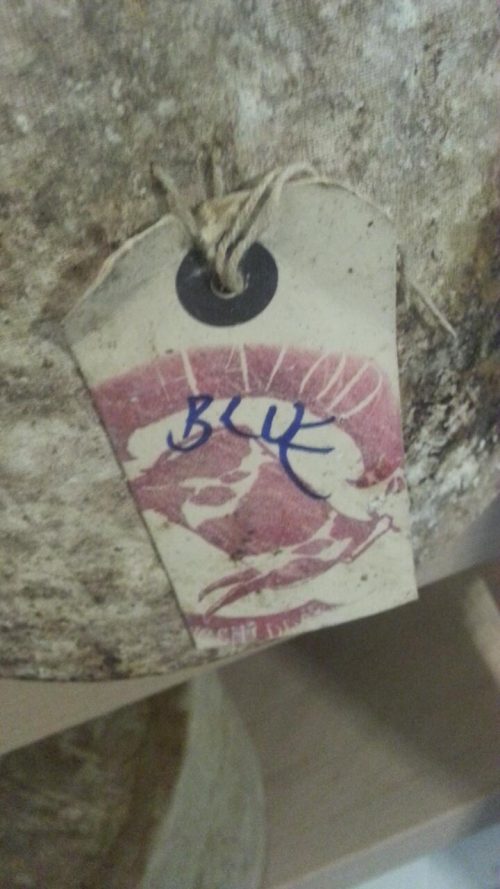 unrefined, natural bacteria producing interesting flavours (I tell them they’re getting two cheeses in one!)  For some of the cheeses we stock at The Courtyard Dairy, I will actively ask the maker to ensure that The Courtyard Dairy’s allotted cheese is selected to have as much natural blueing as possible (notably Hafod Cheddar, where their naturally blue mould tastes brilliant, in my view, and we now have many customers specifically requesting ‘Blue Hafod’).  Most cheese retailers are wary of selling cheese with natural blueing, unfortunately, and don’t actively taste it out, thinking of it as a defect to hide rather than something interesting and tasty!

It is worth noting, however, that not all natural blueing enhances the flavour of the cheese – for example, any natural blue in Kirkham’s Lancashire I tend to cut out and take home to cook with, because it doesn’t enhance the cheese in the same was as, say, the blue in Hafod.  It is all a matter of taste and experience, which is what makes it so interesting.