~ Order now and choose your own delivery date at checkout ~ FREE delivery when you spend £55 ~
Home Learn About Cheese Cheese Musings & Tips What is the difference between ‘crumbly’, ‘creamy’ and ‘tasty’ Lancashire cheese?
Show Sub-menu 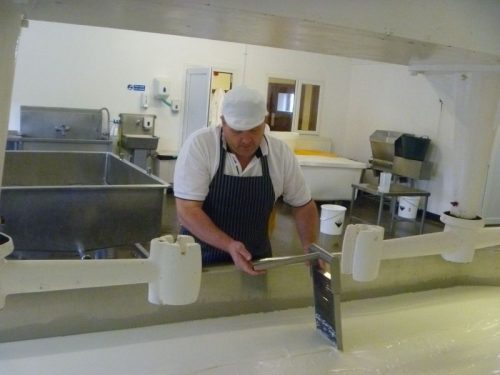 When it’s made correctly, Lancashire cheese is an absolute delight.  But all too often what is sold in shops as ‘Lancashire’ is a soggy bag of sharp, acid cheese.  This has led to many people avoiding Lancashire cheese and choosing Cheddar instead.

If you can get your hands on a good, true Lancashire cheese, however, you’ll find it is one of the finest cheeses in the world (this is borne out by the fact that the excellent Kirkham’s Lancashire is the best-selling cheese at The Courtyard Dairy!)

So how can you tell a good, true Lancashire?  Firstly, look out for a ‘creamy’ or ‘tasty’ profile, then check to make sure it is made on the farm and bound with cloth.  Many of the cheaper varieties are made using increasingly industrial techniques including waxing and vac-packing – they can often be too sharp, crumbly and one-dimensional.  A good, true Lancashire has a texture that is light and fluffy (not dense and firm like Cheddar), and a buttery, long-lasting flavour with a zippy, lactic, fresh tang. 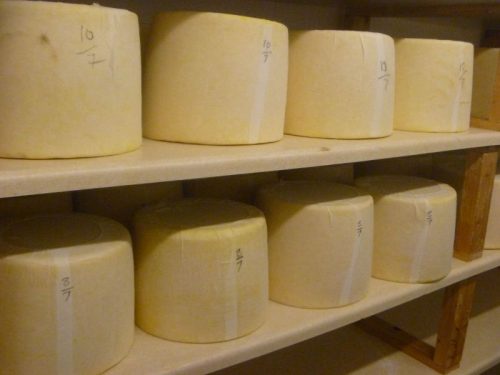 The traditional method of making Lancashire involves combining curds from several days to form one whole cheese – hence ‘two-/three-day-curd’; a method unique in British cheesemaking and consequently Lancashire is moister and softer in texture than all the other hard British cheeses.  This originally came about because the farms were too small to make a whole cheese on one day.  Using the curd from several days then combining it to make a whole cheese overcame this problem.
The cheese is made very slowly, with the curds acidifying gently over a number of days to give that light, lactic flavour and texture.  The curds are then combined and ‘milled’ (broken up) before being packed into hoops and pressed, bound with cloth, and ‘buttered-up’ (the outside being smothered with butter to hold the cloth in place).  Sold after aging for two to five months, the flavours are light, zesty and gentle with a fluffy-like, buttery texture that dissipates in the mouth. 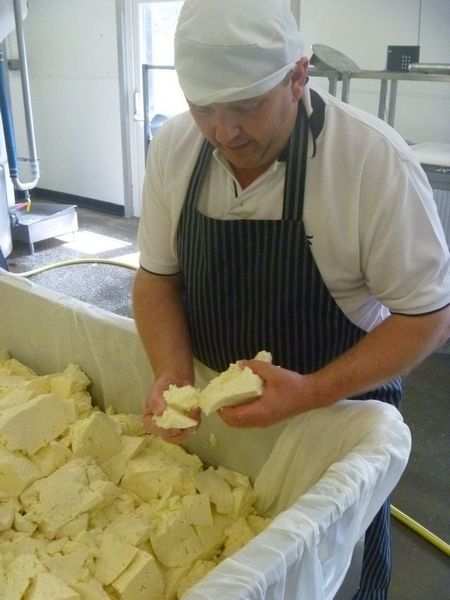 Both ‘creamy’ and ‘tasty’ Lancashire are made in the same way using multiple-day curds.  The key difference between the two is the ageing: creamy is sold aged between two and five months, when it is younger and fresher, with a light zestiness; ‘tasty’ Lancashire is usually aged for more than five months and has a much stronger (sometimes powerful) sharp tang, perhaps even a ‘burn’ as it ‘bites you back’.
The Kirkham’s Lancashire cheese sold at The Courtyard Dairy is aged about five months; just on the verge between the two profiles.

‘Crumbly’ Lancashire (also called ‘new’ or ‘single-acid’ Lancashire)
This modern variant came about in the 50s, but came into real prominence from the 60s onwards.  It’s not really a ‘traditional’ Lancashire: crumbly Lancashire is more akin to modern day Cheshire and Wensleydale cheeses.  Said to have been developed  when cheese merchants asked Lancashire cheesemakers (Greenfields and Singleton’s both lay claim to it’s creation) for a cheaper, younger cheese similar to Cheshire, Caerphilly and the ‘new’ White-Wensledyale (itself an invention of less than 100-years).
This demand tied in with the development of starter bacteria for cheese making, rather than relying on the curd to acidify slowly over days by the action of its natural bacteria, cheese makers found they had a way to speed-up the cheese-making.  Adding lots of this pre-made ‘starter bacteria’ to the milk in the morning makes the milk go acid very quickly producing a drier, hardy, tart cheese from one-days worth of curd.  Cheese made in this much shorter time reduces costs as it is ready to sell much more quickly (2 weeks+) but as it’s dry can also last.  It also frees-up staff from the long cheesemaking day.  Using lots of starter bacteria also gives a more consistent cheese that is easier to make.
Crumbly Lancashire is sold young (2-6 weeks old and is characterised by being bright-white, very crumbly, and very sharp and fresh in flavour. Despite being a relatively new invention, crumbly Lancashire is perhaps what most people would associate and expect ‘Lancashire cheese’ to look like and taste, especially outwith the county. 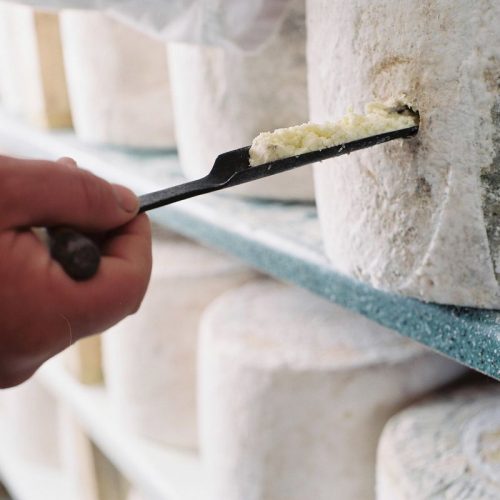 It is not generally considered to be of the same high-quality as ‘creamy’ and ‘tasty’ Lancashire, indeed Kit Calvert (of Wensleydale fame) upon tasting it in the 70s remarked “I shall never eat Lancashire cheese again”.