~ Order now and choose your own delivery date at checkout ~ FREE delivery when you spend £55 ~
Home Learn About Cheese Cheese Musings & Tips What is the difference between Single and Double Gloucester?
Show Sub-menu

What is the difference between Single and Double Gloucester? 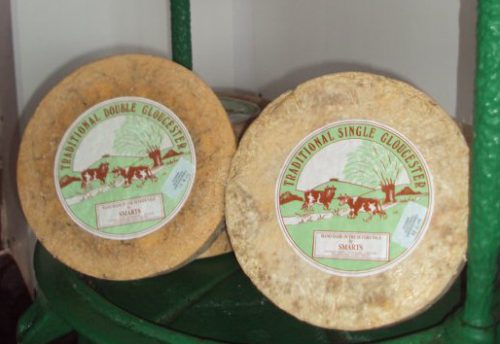 There are many opinions and different views on what makes a true Single or Double Gloucester and how they vary as cheeses. The height, the weight, the richness, the age, the colour, the skim of the milk, using two milkings instead of just one, and adding extra cream – all have been cited at various stages in Britain’s cheese-history to explain what makes the difference between the two styles.

But it seems no-one can fully agree, because even the earliest written records of the Gloucester cheeses seem to show much confusion and contradictions on what truly represents the difference.

One of the reasons for the lack of definite evidence on the difference between these cheeses is that it appears that Single Gloucester was often reserved for the farm workers and labourers in the region, so little was written about it by scholars of the age. The general consensus , however, is that the Single Gloucester version was made at the beginning and tail-end of the season (spring and early autumn) when anim 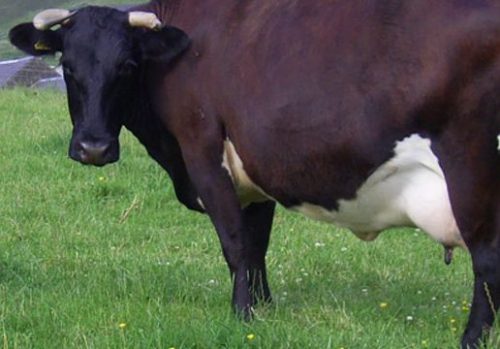 Similar to ‘fog’ or ‘hay’ Wensleydale and ‘early-ripening’ Cheshire cheeses, the Single Gloucesters were cheeses that were made in small quantities. Being made softer, and also perhaps with poor quality hay/forage and early/late lactation milk from the cows (which is harder to make a ‘keeping’ cheese from), they had poor keeping qualities. The recipes for ‘hay’ cheeses such as the early Single Gloucester seem to make cheese that is less acid, with higher moisture content, and smaller than the Gloucester we know today. They would have been a soft, moist, ‘hard’ cheese, with a fresh, sharp flavour, and they would have ripened quickly (ready at 3 weeks to 2 months), which meant they were often consumed on the farm.

Double Gloucester by contrast was made in the height of the milking season (May to July), when there was a surplus of milk. The making process had more similarities to Cheddar – a drier, more manipulated curd, with higher acidity. More milk available meant the cheeses could be larger (twice the size of the Single Gloucester) and the dryness of the cheese meant it was longer-lasting, often sold aged between 4 and 8 months. It had a firm but silky texture with a mellow tang. Originally made from the rich Gloucester cow milk given by cattle out at pasture, it would have had a yellow hue. In later years this colouring was encouraged by the addition of the colourant annatto (the same as is used to colour Red Leicester, but in lower quantity so as to only give a light orange or straw colour). The Double Gloucester was a firmer, more stable cheese than Single Gloucester, thus less affected by travel and able to be sold outside the region, becoming well-known and popular. 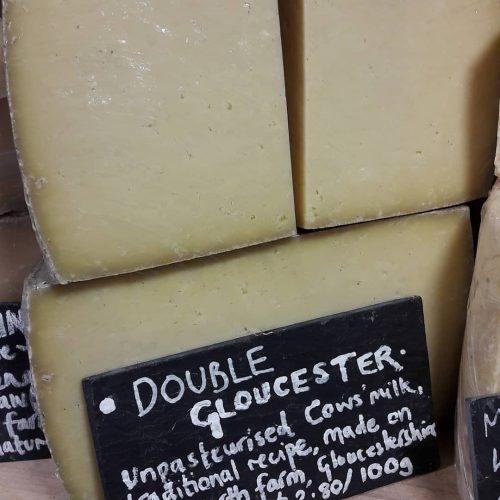 There are some sources that state that Single Gloucester was lower in fat because it may have been made from ‘skimmed’ milk, using only morning milk (said to be lower in fat) or by combining ‘skimmed’ milk from one evening milking with full milk from the next morning milking. Double Gloucester, however, was only made with full fat milk. (The reason for skimming the cream off the milk was so that butter could be made with it, leaving the resulting skimmed milk for making cheese). Accounts of this practice vary – it appears that some farms would have done it, but others maybe not depending on their own recipes and whether they made butter. Indeed it was reported in journal articles in the 1850s that analysing the Single and Double Gloucester fat contents showed no difference. Certain farms renowned for the quality of both their Single and Double Gloucester would not dream of using skimmed milk, using only full milk for both, the difference in cheese being more in the size and recipe noted above.

Once a famous cheese, Gloucester cheese, and the Gloucester cattle breed, fell out of favour in the early 1900s and almost disappeared from existence. Not appearing in the ration book during World War Two and until 1954, Gloucester production all but stopped, with post war production discouraged by the British Milk Marketing Board’s draconian controls.

The owner of The Courtyard Dairy, Andy Swinscoe, has records from his Great Grandmother giving her recipes for Single and Double Gloucester, but she stopped producing the cheese in 1939, and from then on only ever occasionally made cheese if the Milk Marketing Board failed to collect the milk, or returned milk to the farm.

Some Double Gloucester production, however, restarted in small quantities in factories and some farms. This was a stable, good-keeping cheese that was efficient to make. Double Gloucester is still made in fairly similar methods throughout the UK today, and although most tends to be of the ‘block’ variety, there are still some good farm versions available. 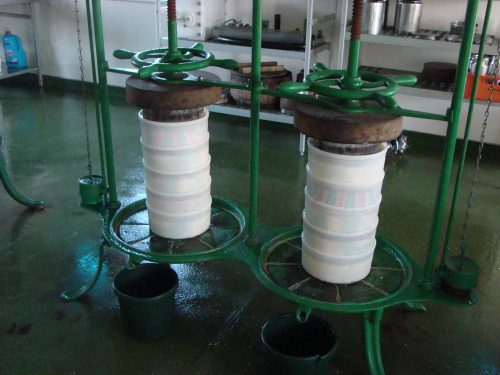 Every Spring Bank Holiday the most important event in any cheese-enthusiasts calendar takes place…. Gloucestershire Cheese Rolling. When mad men (and women) chase after a 9lb cheese chucked down the…