~ Order now and choose your own delivery date at checkout ~ FREE delivery when you spend £55 ~
Home Learn About Cheese Cheese Musings & Tips Why is red cheese ‘red’?
Show Sub-menu

Why is red cheese ‘red’? 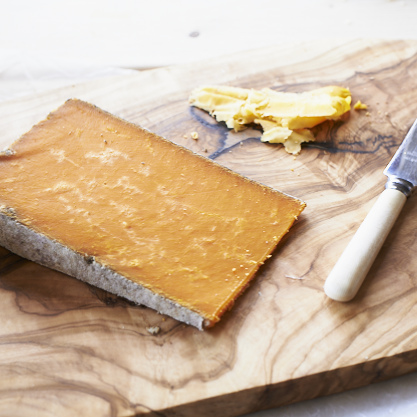 Have you ever wondered why some cheeses, like Cheshire, Red Leicester and Shropshire Blue, have such a dark red/orangey hue?  And did you wonder “Is it natural?”

Well the colour is not from milk; it is quite definitely added in.

But it is natural in so far as the colour comes from a harmless vegetable colourant – Annatto.  Annatto comes from the seeds of the Achiote tree (Bixa orellana), which is native to South America and the Caribbean.  Standing tall in rows of hairy heart-shaped pods, the seeds have a characteristic brick-red colour, and have been used for colouring and dyeing everything from textiles to cosmetics and even Aztec paintings.  But now, however, they’re mainly used to colour food: in particular, cheese and butter.

For cheese use, the colour is extracted from the seeds by drying them before soaking them in an alkaline solution.  This leaches the colour out into a solution, which is then added into the milk right at the beginning of cheese making.  This colours the curds and gives the orange and red cheeses their hue.

So how did a South American plant come to be colouring traditional British territorial cheeses like Leicester and Cheshire, as well as French classics like Mimolette?

Well it isn’t a recent thing, that’s for sure: there’s evidence of it occurring in England as early as the 16th century.  It is thought to have begun in southwest England – particularly Gloucestershire, with the practice spreading to the surrounding areas of Warwickshire, Derbyshire, Staffordshire, Cheshire and Leicestershire.  There’s evidence of colouring cheeses found in all these counties dating as far back as the 16th and 17th centuries.  These counties traditionally used all sorts of colouring agents to add colour to their cheese: carrot juice, turmeric, marigold petals and even homegrown saffron (which was grown in the UK in those days, Saffron Walden being the major English centre for the production of the saffron crocus in the Middle Ages.)

In the 18th century, Britain began to import more coffee, spices and all types of produce from the Americas.  Consequently the locally-sourced colourants became superseded by the imported annatto – because it produced a better result in terms of colour with less effect on texture and flavour.  For over 200 years Annatto has therefore been the colourant of choice to colour cheese ‘red’.

But this doesn’t answer the question of why would a cheese-maker want to colour their cheese red?

The answer is simple – aesthetics.  It was all about the looks.  Annatto became a colouring for some traditional British territorial cheeses as well as French classics like Mimolette primarily because of good 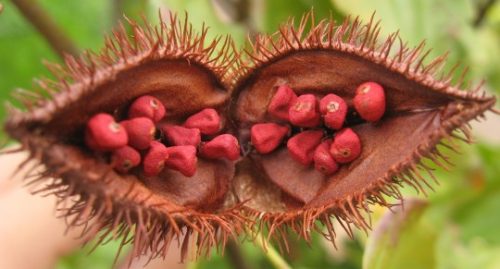 In the ‘olden days’ colour was taken as an indication of quality.  People knew that when the best cows were out at pasture in the spring and summer the fat in their milk would pick up a pigment from the grass called beta-carotene (which is abundant in fresh pasture, but not so much in winter feed such as silage and hay).  The beta-carotene gives full-fat pasture-fed cows’ milk a yellow tinge*.  And not only does this mean full-fat pasture-fed milk is the best, most flavoursome milk, but it also gives the best flavours to many cheeses.  And with it, goes the yellow colour.  Hence the best cheeses were considered to be richer yellow in colour, and this was something the discerning cheese buyers were looking for.  It was said, “White Leicester was not to be accepted by London customers.”

So when farmers’ milk maybe wasn’t as good quality as they’d like to get this deeper orange or yellow ‘hue’, the enterprising ones among them would add cheat the system and a bit of colour to make the milk less pale.  This also helped produce a consistent year-round tinge.  Indeed, many of the cheese-making manuals of those days instruct makers to bring up the colour of their winter milk by adding a touch of annatto.

What’s notable is that all the cheeses known to be coloured (such as Gloucester, Red Leicester and Warwickshire) were often made with skimmed milk (unlike cheeses like Cheddar).  In those cheeses the cream of the milk was taken off to make Stilton, cream cheese or butter.  Hence these cheeses would have naturally been paler, so it is no wonder colour was added. 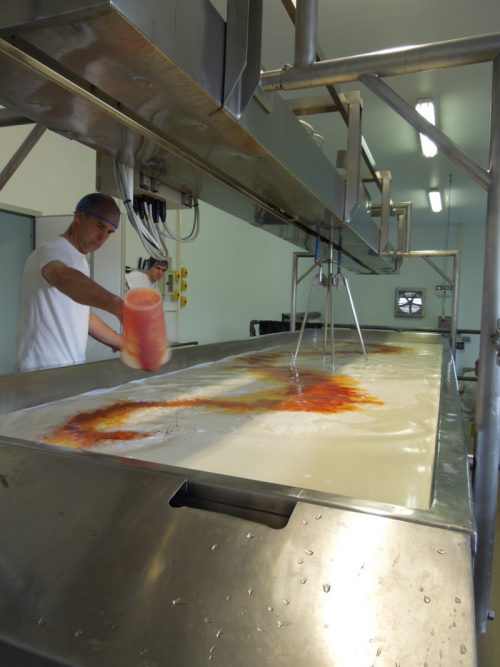 Other coloured cheeses like Cheshire have high acid curds (crumbly and fresh), which result in pale bright-white cheese (high acid curds retain their dense protein bonding structures and so continue to appear white).  So another reason to add the colouring would be to mask its true stark-white paste.  The colouring of Cheshire is, however, thought to have started more recently than the others, as a result of cheaper Welsh variants of Cheshire being coloured with annatto to distinguish them from ‘true’ Cheshire.  Those redder versions soon became more sought-after (they were considered better, thanks to the colour!) and so the majority of Cheshire cheese makers eventually adopted the colouring.

In many cheeses, sooner or later more and more colour was added until actually a deep red hue was achieved.  Although this is obviously not the same as the yellow hue from pasture fed animals, this red tinge helped them stand out from the crowd.  It also distinguished them from their other territorial counterparts.  And so it became that certain cheeses became synonymous with this colour, resulting in a demand for ‘red’ cheeses.  (It is still happening now, with creation of new ‘red’ cheeses that use annatto colour to help them stand out in shops and on cheese-boards – Shropshire Blue, Blacksticks Blue, Harrogate Blue, etc.)

Nowadays, however, a red colour doesn’t mean the cheese is of a poorer quality; in fact making a cheese with an even colouring and no mottling is no mean feat!  (Beware, though, because orange Cheddar – especially in the United States – can often denote a mass-produced, generic version.)

For many of these ‘red’ cheeses, their colour has become part of their identity and history – many devotees are in love with their deeply-coloured Leicester and wouldn’t have it any other way.

But does adding annatto make a difference to the flavour of the cheese?

That’s the big question.  And it remains unanswered.  If the flavour is affected, the effects are probably minimal.  There are so many other minutiae things that 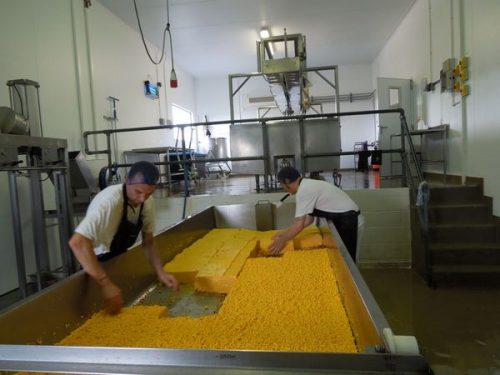 affect cheese flavour from batch-to-batch that doing an accurate comparison of non-annatto and annatto cheese is almost impossible – the difference, if any, is so slight that it cannot be detected above these normal batch-to-batch variances.  Most (including cheese-making greats like Liz Thorpe and Steve Jenkins) would say that dyeing cheese doesn’t affect the taste/cheese-make, but there are still a good few that believe it does (including the eminent Patrick Rance and the brilliant Colston Bassett producer Billy Kevan who believes it causes more moisture to be held in the curd).

Just as an aside, annatto wasn’t used in any cheese production during the war rationing years 1939-53 because it wasn’t imported, so all of the traditional ‘red’ cheeses switched back to being ‘white’!

An interview with Todd Trethowan: maker of Gorwydd Caerphilly cheese

An interview with Todd Trethowan; cheese-maker of the fabulous Gorwydd Caerphilly cheese! Find out how Todd got into cheese, what he loves on the food scene, the ethos for his…

Last month we sent Pamela Curran, cheesemonger in training, to see how Sparkenhoe red Leciester Cheese is made.  The Clarke’s are the only-remaining makers of unpasteurised farmhouse red Leicester cheese…