Cheese and Beer Matching – by John Kelly of Kirkstall Brewery 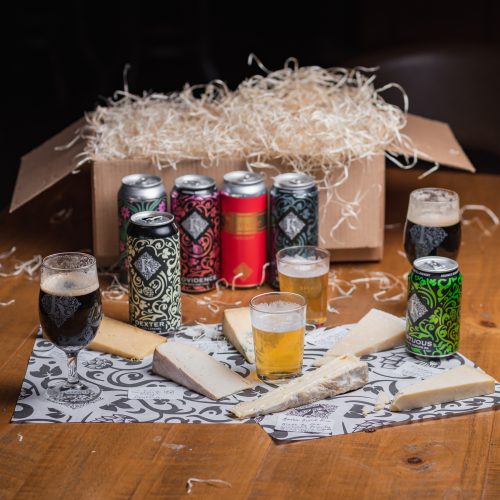 How do you match beers with cheese? Does it really work? And is beer as good as, or better than, wine or port with cheese?

There are certainly particular styles of cheese that benefit from pairing with beer rather than wine but the reverse is also true. The ascendancy of craft beer, introducing a much wider spectrum of flavours, has given cheese lovers a lot more to play with when choosing what to drink with their cheese.

John Kelly knows a few things about beer having been heavily involved with the early importing of American-style IPAs (bringing Sierra Nevada to these shores!) that have now become a mainstay of the current beer revolution.
He went on to become managing director of Kirkstall Brewery, and is one half of the Yorkshire beer-power couple (his wife, Christa Sandquist, is operations manager at the brilliant brewer Magic Rock). So it seemed appropriate that The Courtyard Dairy should ask John to find the perfect match for each style of cheese they offer.

“There are no hard and fast rules, so no-one should ever feel embarrassed because they decide they like a certain beer with a particular style of cheese. There are, however, a few guidelines that will serve as a framework for an introduction into matching cheese with beer. Once you know the ropes, you can enjoy experimenting as much as you want. Always try to complement or contrast: picking out identical flavours in both the beer and cheese leads to a dull matching. There are some pitfalls though – and we don’t want the flavour of the beer to overpower the cheese.”

Fresh goats’ cheese is incredibly creamy and can be cloying on the pallet. Its beauty is in its subtlety, so we don’t want to overpower it with big beers. You need something clean and bright, crisp and refreshing, a low bitterness pale ale or a pilsner would be perfect here.

Why not try Kirkstall’s Pilsner or Virtuous with the light freshness of Hebden Goat or Dorstone.

With these cheeses we’re starting to come across some more mature flavours, so we can increase the complexity of the beers accordingly. A younger soft cheese pairs well with IPA as the creaminess is at the forefront and the bitterness is a good foil. More mature/pungent soft cheese which carries a little more inherent bitterness is better balanced by a sweeter beers such as New England IPA.

Why not try Kirkstall’s Providence with the rich Baron Bigod Brie. 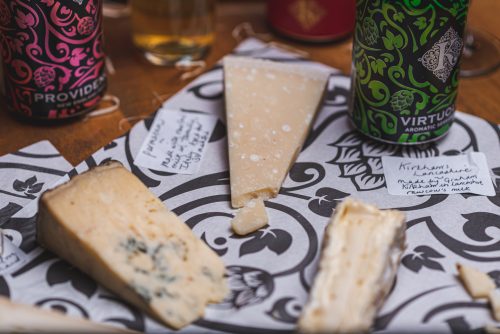 Hard cheeses vary considerably in flavour, texture and intensity, so to make it easier I’ve broken it down into three main-styles. But for a good all-rounder try a golden ale or an old English-style bitter. 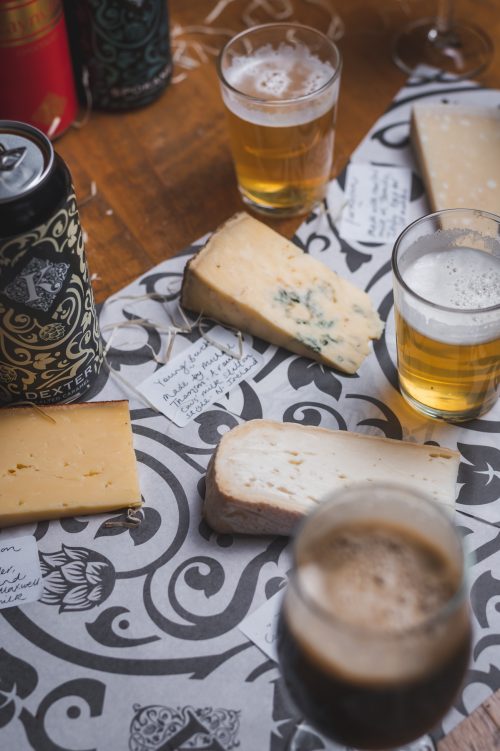 Everybody chooses a decent strength porter or stout to go with the blues and, to an extent, it’s hard to argue with – it really does work. The sweetness of stronger stouts dance beautifully with the high acid on some more mature blues. Barley wine is also a perfect match for drier blues to create a complete mouthfeel.

John still hasn’t found a beer that he enjoys with washed-rind soft cheeses: he’d much rather have an Alsace white wine, Gruner Veltliner or Gewurtzramier.
But Andy enjoys washed-rinds with wheat beers, or wild-fermented sour beers.

Both wine and beer have an incredibly diverse matching potential, the only thing I will say is that beer beats wine for affordability.
I firmly believe matching beer with cheese should have a place at the table in the finest restaurants in the world, just as wine already does (and rightly-so), but more importantly they both should be enjoyed matched with cheese on an everyday level too.
It’s not about beer versus wine, instead why not line up different cheeses with one of each…?

Visit Kirkstall Brewery’s website to find out where their pubs are and order their beers for home delivery (or you can order them with cheese here >).

Find out more fascinating facts about cheese – simply sign up to The Courtyard Dairy monthly newsletter for regular exciting offers and interesting information from the cheese-world.  Sign up here.

What should I be drinking with my cheese?  It’s the age-old question whenever the cheese board is pulled out… Well, with two Michelin stars, five AA Rosettes and many other…

Hebden Goat – a video visit to the farm

Gillian and Tim Clough farm a small herd of 10 Anglo Nubian goats in Hebden Bridge (England). Gillian hand-milks the goats every day before using it to make Hebden Goats&#8217…