The history of fruitcake paired with cheese

If you’ve heard that Northerners are apparently keen on a wedge of fruitcake to complement their cheese, you might be asking is it just a rumour, or is it a modern fad?
Well it’s certainly not a rumour. The Courtyard Dairy sells vast amounts of cheese to people who want to enjoy it with their fruitcake. In fact at Christmas the shop actually sells more cheese to go with the Christmas fruitcake than it sells of Stilton. Customers come in, make their cheese selection, and then say, “Now we need a cheese to go with the Christmas cake…” It’s so popular that the shop even sells a fruitcake specially made to go with cheese!

How did this come about?
What we do know is that matching fruitcake with cheese is not a recent phenomenon. The eminent Yorkshire Food Historian Peter Brears has traced it back to definitely at least a Victorian tradition and the first written reference we’ve found is from Joseph Lucas’s book 1871 ‘Studies in Nidderdale [Yorkshire]’ “On Christmas Eve one Yule Cake is given to each member of the family, along with a piece of Christmas cheese. As a rule, part of it is left for Christmas morning, and eaten at the breakfast.”
It seems certain eating fruitcake and cheese started in Yorkshire before later spreading throughout the other northern counties. The tradition of enjoying fruitcake with cheese was and is strong in the north of England, but seems often frowned upon or ignored elsewhere in the UK.

The true origins of how and why it came about are shrouded in mystery – although Yorkshire is almost certainly the starting point. It may date back to the days when Wensleydale was traditionally a cheese to be eaten in the winter, especially at Christmas. In those days, Wensleydale was only made in the spring and summer, and then collected from the farms in the autumn at the end of the season. Thus the cheese reached full maturity at Christmas – so it was regarded as a special cheese for consumption at that time, not just an ‘everyday’ cheese. Perhaps Wensleydale was the cheese of choice to taste alongside Christmas cake for that very reason. And the marriage works so well, it isn’t surprising.

What cheese is best to accompany a rich fruitcake? 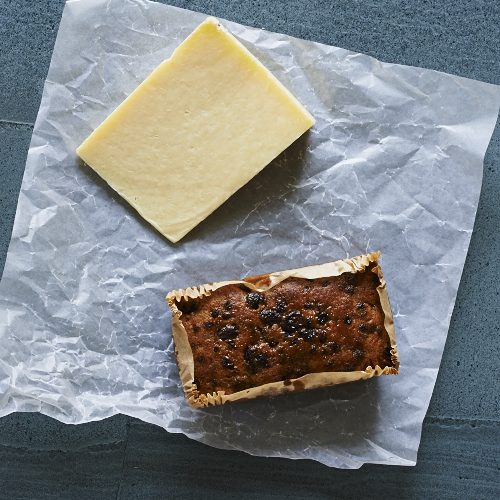 Andy Swinscoe, The Courtyard Dairy’s owner and award-winning affineur, says he would go for a traditional ‘crumbly’. Crumbly cheeses often originated from the north of England and, at 2-3 months old, have a fresh, zesty and clean flavour, with a sharp finish and crumbly texture. Examples are Cheshire, Lancashire, Caerphilly and Wensleydale. The lactic ‘bite’ offsets the rich dense figgy/curranty note of a proper moist fruitcake.
As Andy lives in Yorkshire, it follows that for him it must be Wensleydale. But for Kathy his wife, who originally hails from Lancashire, it has to be Lancashire – and the rich zestiness of Kirkham’s Lancashire is hard to beat! Their choice of cheese to accompany fruitcake is the source of many a great family argument. A modern day War of the Roses.

What cake goes best with the cheese?
For Andy, a proper Yorkshire fruitcake should be dense but still moist with a kick of brandy at the end (although the strong Methodist following in the north originally led to the dried fruit being soaked in tea instead of brandy!). The cake should be jam-packed full of dark dried fruit (raisins, currants, etc.).
Nowadays, however, other traditional cakes of the north have also become popular to eat with cheese – Eccles cakes or Blackburn cakes, for example, go fabulously with Lancashire cheese.

So go ahead and try it… rich fruitcake and a delicious crumbly cheese. It’s not a modern foodie fad. It’s a tradition that has been followed for generations, a tried and tested recipe for success!

What is an artisan cheese? And what do the words traditional and farmhouse mean?

‘Farmhouse’, ‘traditional’ and ‘artisan’ are not protected terms so essentially mean nothing! This blurs the boundaries as far as the consumer is concerned – so what is an artisan, traditional…