Despite the decline of farmhouse cheese production as a result of the industrial revolution, by the early 1900s there was still a reasonable amount of cheese being made on the farm throughout the UK. But that was about to change. Before the First World War there were over 3,500 farmhouse cheese-makers in the UK. By the end of the Second World War, barely 100 were still making cheese. 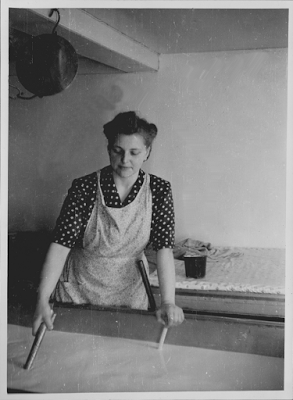 The political turmoil throughout Europe that followed the First World War brought about significant changes in British cheese production. During the First World War much of farmhouse cheese production ceased. Following the war, many farmers didn’t bother to start producing cheese again, and those that did continued to struggle. The farming, market and social conditions that prevailed right through into the 1930s meant that specialist cheese-making remained uneconomical.
The 1930s rise of unrest and growing Nazism within Europe led the British Government to realise it could no longer rely on imports from overseas, the colonies and the Empire in order to feed the nation. Britain had to become more self-sufficient, so the government introduced several key policies. One of these was the 1933 creation of the Milk Marketing Board (MMB) designed to encourage, control and maximise milk production in order to feed the nation.

The MMB guaranteed farmers a good price for their milk and arranged for it to be collected from the farm. Dairy farmers throughout Britain could now be sure that there was a stable buyer for their milk. The economic incentive for producing cheese vanished overnight – why would farmers want all the effort of making cheese (a complicated and time-consuming procedure) when the Government would give them a good price for their liquid milk? This single move, the introduction of the MMB, instantly stifled farmhouse cheese production throughout the UK.
This was compounded by the fact that the MMB took over the responsibility for using surplus milk, so it set up to make cheese in its own and other licensed dairies. The MMB was responsible for regulating, providing licenses, and selling milk back to farmers for farmhouse cheese production, often making it uneconomical for the farmer. The MMB even went so far as to discourage farmhouse production, so they had control over the wholesale market of cheese. 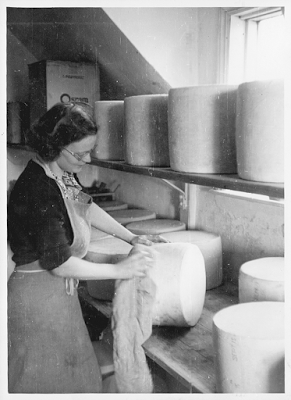 So began the trend towards cheese being made in large factories from milk sourced from a wide area. This trend started at the same time as Britain was suffering from the Great Depression – a time when luxury cheeses were simply not in demand. Hence many farmhouse cheese-makers opted to throw in the towel, and made the more economically sound decision to sell their milk to larger cheese producers or the MMB. Indeed the 1930s saw the very last maker of farmhouse Stilton cease production, as the number of farmhouse cheese-makers reduced to sixteen hundred, mainly concentrated in the southwest, northwest and Yorkshire Dales. Farmhouse cheese making all but disappeared from other areas of the UK.

As farmhouse cheese production continued to decline, and many of Britain’s traditional cheeses disappeared, the factories began producing their own versions of ‘traditional’ cheeses, often nothing like the original.
The next death knell for farmhouse cheese-making happened in 1941 in the form of cheese rationing, which would continue until 1954.  During this period only certain types of cheese were permitted to be made, and the cheeses had to be adhere to certain prescribed standards (in terms of labour, yield, low defects and the ability to sell the cheeses young or old) to ensure they were efficient to make and an easy way to capture the resource that is milk; an important part of feeding a country at War. Wensleydale, Cheddar, Dunlop, Leicester and Cheshire were preferred. There was no creamy Lancashire, no Stilton, no Caerphilly and no Gloucester. Britain lost hundreds of farmhouse cheeses overnight. The effect on farmhouse Wensleydale production, for example, (which, even though it was in the ration book, had its method of production strictly controlled) saw 176 producers in 1939 drop to just 9 by 1946, with the last one giving up in 1957. This devastating trend was repeated across all the British cheese types.

Britain was the last country to end rationing, and it was not until 1954 that the restrictions were fully removed. In the meantime, many of the farmhouse cheese-makers had moved on, their practices forgotten. Many of the pre-war classic cheeses were not revived, leading Dorothy Hartley, writer of the infamous ‘Food In England’ Book (1954) to comment that “our cheeses are lost to England”.
During rationing, Britons seemed to lose their taste for food, as quality produce became a distant memory. The long period of enforced restraint was followed by a period of ‘let’s make everything as cheaply and economically as possible’ – this was the time of the rise of tinned foods, battery-farming of hens, SMASH, SPAM and sliced bread. There wasn’t much of a market for different and unusual cheeses, so block industrial cheddar became the norm. Farmhouse British cheese all-but disappeared forever.

But it was not just the farmhouse cheese-makers that were feeling the pressure – the retailers and cheese-sellers were also suffering. The small-scale food retailers that had been the stalwart of championing Britain’s interesting and diverse produce started to disappear. Throughout the 1950s and 1960s the re-development of British town centres and the change in shopping habits saw these traditional food sellers – greengrocers, butchers, cheesemongers and fishmongers – struggling to survive as restricted parking, higher rents and rates, and a convenience attitude took its toll. They couldn’t compete with the newly-emerging and popular supermarkets, where the cheese on sale tended to be the easy-sell pre-packed squares of block cheese that came straight from the mass-producing factories, rather than the interesting and flavoursome farmhouse cheeses that did not look as appealing, needed to be carefully looked after, and had to be freshly cut.

To top all these issues, the Milk Marketing Board was still in existence and continued to do its utmost to discourage farmhouse 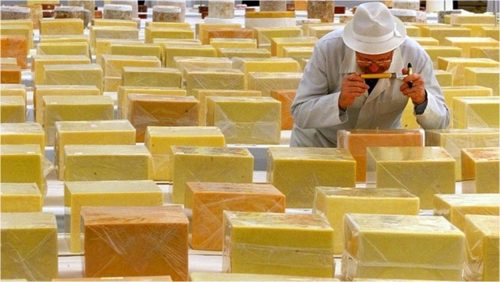 cheese making. With the MMB controlling the wholesale cheese market, there was very little or no premium for cheese that was made in the traditional farmhouse method (the farmer receiving the same price as if the cheese had been made industrially). The MMB actively sought to discourage identification of the farms and the stories behind farmhouse cheese, giving the farms numbers instead of naming them. Montgomery’s was famously ‘farm 774, Kirkham’s was ‘farm 34,’ so cheese aficionados started to look for these numbers. The MMB also gained the sole use of the term ‘farmhouse cheese’, a label that could be used on any type of cheese – from factory to creamery – sold through them. As the true farmhouse cheese-makers fell out of favour with this, and started to age and then sell their cheese direct to the public, they discovered that even if they were making their cheese on their farm, they couldn’t call it ‘farmhouse’!
With farmhouse cheese production under all these pressures, inexpensive standard cheese rose to dominate. Many British cheeses became mediocre at best, whilst some were downright awful. British cheese making was now geared towards industrial block-cheese production – vacuum packed yellow squares made in a factory – and the diversity and character of individual territorial cheeses declined. Many true farm-made styles of cheese became extinct, whilst others were holding on with just one maker – traditional Lancashire, Cheshire, Gloucester, for example. ‘Regional’ variants of cheese began to be produced all over the UK: the same factory often making Cheddar, Lancashire, Cheshire and Wensleydale, with very little difference between the recipes, techniques and actual cheese itself. Cheese became bland and uniform; standard Cheddar rose to dominance – and accounted at one time for 70% of all cheese sales.

Times were indeed looking dire. Davis, a seminal authority at the time, made a prediction in 1965 that “the biggest problem with the food industry in the year 2000 will not be quantity, but monotony”. Thankfully this prediction did not come true as far as cheese is concerned, because a generation later things started to change. It was time for the resurgence of individual farmhouse British Cheese.

With British artisan cheese all but disappearing in post-war Britain, things were indeed dire for farmhouse cheese makers. A few continued to make cheese, encouraged by the remaining great cheesemongers…

Cheese making was around in Britain during the time of the Celts, who simply let milk go sour (turning acidic exactly as it does today if you let your milk…