With British artisan cheese all but disappearing in post-war Britain, things were indeed dire for farmhouse cheese makers. A few continued to make cheese, encouraged by the remaining great cheesemongers in the land epitomised by the renowned Patrick Rance. But with barely one farmhouse cheese maker in each county, artisan cheese-making had all the hallmarks of an art that was dying out.

Thankfully, changes were on their way. The 1980s saw a turning point for food in Britain. Britain was starting to recover from its economic woes and, thanks to rising disposable income and increasing foreign travel, the British people began to take more of an interest in food. This was evidenced and influenced within the restaurant industry by guides such as the Good Food Guide and the Michelin Guide, chefs such as Keith Floyd cooking on TV, the rise of farmers’ markets and consumer groups such as Campaign for Real Ale and The Campaign for Real Bread. The demand for artisan products such as traditional farm-made cheese began once again to increase. 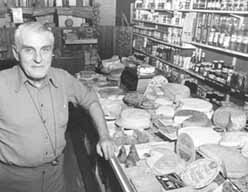 Against this backdrop Patrick Rance continued to campaign and to encourage farmers to return British cheeses to their rightful glory, before they disappeared for good. “Clamorous protests alone can save British cheese,” he said. Rance’s original efforts succeeded in raising and rescuing the profile of Britain’s fledging and endangered cheeses, as well as challenging the Milk Marketing Board and its draconian rules, and he is thus widely credited with saving artisan cheeses in Britain. Although Rance started the revolution, however, it needed the influence of many other factors to move Britain from having next-to-no farmhouse cheese production to the position we see today.

Encouraged by people like Rance and Keith Flloyd, Britons began to see the value in traditional food production (epitomised by TV’s ‘The Good Life’) and several new-wave cheese-makers left the city and set up small scale farm enterprises on which to made cheese: Charles Martell (of Stinking Bishop fame), Robin Congdon (Beenliegh Blue and Ticklemore) and the famous builder-cum-cheesemonger-cum-cheese-maker James Aldridge (who went on to create, influence and inspire many of the early new cheese-makers throughout Britain), to name but a few.

Along with these new cheese-makers, the old traditional cheesemongers like Paxton and Whitfield were soon joined by newly emerging cheesemongers (like Neal’s Yard Dairy and La Fromagerie) from which the new ‘proper’ cheeses could be promoted and supported. In time they would all group together to support the nascent industry by creating support associations like the Specialist Cheese makers Association and Slow Food, and awards schemes, such as The British Cheeses Awards, which would firmly put British cheese back on the map.

At the time, however, although this rising interest encouraged some new producers to set-up, there were still very few farmhouse cheese-makers until the early 1990s, indeed in many top restaurants you’d still be served a mainly French cheeseboard. There just wasn’t that much farmhouse and artisan cheese about, even with an increasing interest and demand from consumers and restaurateurs, because it didn’t make financial sense for many dairy farms to make cheese.

It was then that the major sea change came about for British artisan cheese – the dissolution of the Milk Marketing Board (MMB). Until the early 1990s this had controlled the milk price in the UK. Under the MMB, farmers had received a good (and guaranteed) price for their liquid milk. Hence there was really no economic incentive to produce cheese on the farm.

But the demise of the MMB saw this guarantee removed, and suddenly British farmers had no guaranteed income for their milk and had to find other buyers, predominantly the big supermarket chains. Since then, milk prices have plummeted. As a result, many dairy farmers have either diversified, or given up altogether. But thankfully a few have chosen to add value to their milk and produce a product unique to their farm in order to keep dairy production viable on a small scale. Using their own milk and working on this small scale allows them to control their inputs and make unpasteurised cheese, for which they can charge a premium and hence create sustainable businesses. A revolution in cheese making started to happen. Now, for the first time in years, traditional cheeses made on the farm would sell at a price higher than their mass-produced cousins. 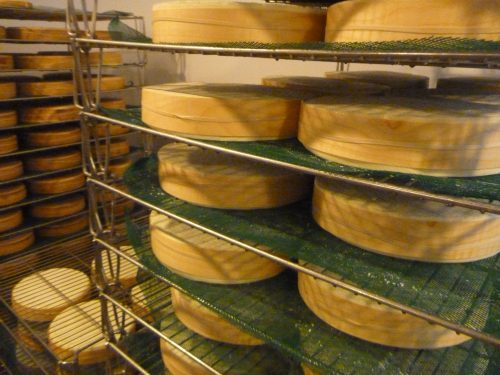 This new economic incentive for farmers to produce good quality cheese was encouraging. As was the British market for food: since the 1980s it had been steadily improving, with further interests and a desire to support British and local food arising as a result of many issues, including food-mile concerns, wanting to support local economies, and consumers wanting to identify themselves with their native foodstuffs as a lifestyle choice. Local foods became popular and were perceived to be of higher quality. Alongside this, a general consumer movement to care more about the provenance and traceability of food arose, mainly because of ethical concerns (as can be seen in the recent movie Food Inc and documentaries such as Britain’s Really Disgusting Food). Ethical concerns stemmed from food crises such as BSE, Foot and Mouth and the Horsemeat Scandal.

This interest in ‘real’ British food was also fuelled (and capitalised upon) by the media and chefs, who helped popularise and raise awareness of food within Britain, with many taking a focus on modern British food and local produce, including artisan cheese production.

Farmhouse production for many traditional cheeses ceased completely in the 1950s, but not these new cheese producers began recreating and reinstating traditional recipes, including unpasteurised Gloucester, red Leicester, and Caerphilly. Others have expanded into new areas and techniques using ewes’ and goats’ milk, and new soft and washed-rind cheeses; creating unique cheeses in the process, such as Stinking Bishop and Berkswell. The expanding diversity and innovation within British cheese making is cited as unparalleled in the world (except, perhaps in the US in areas such as Vermont), with many of the ‘new’ cheeses being fantastic quality. At last, in the early 2000s, for the first time for hundreds of years, the number of farmhouse cheese makers was rising.

The loss of tradition and heritage meant that conservative attitudes and regulations, such as AOC / PDO, which had protected continental cheeses and foods in Europe, also had the effect of stifling innovation and experimentation. Britain has thus found it easier than areas affected by such regulations to create new cheeses, supported by British consumers who seem to prefer innovation and originality to tradition and reputation of old.  This rapid growth in artisan cheese production has led to the position where Britain is now reported to have over 750 different cheeses, characterised by distinct cheeses made by individual producers. Many of these have been created only in the last 30-years, and the current trend suggests Britain’s farmhouse cheese industry continues to grow in quality, diversity and flavour. 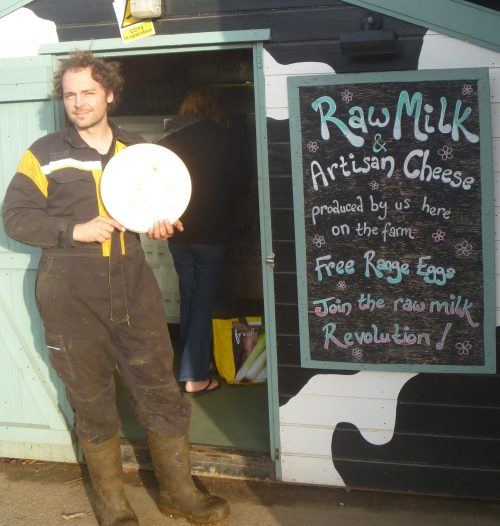 The new cheeses that have become worldwide award winners, however, tend to be confined to the traditional areas of hard and blue. Many of Britain’s new cheeses are thus being criticised as simple copies of French, Italian and Greek styles and recipes. Although the British ‘terroir’ is clearly different from that abroad, some critics consider that British cheeses are not different enough, nor as consistent as they should be. “Why should we stock a cheese which is a copy of a French original?” is being asked.
So instead of copying French recipes, prominent industry figures believe British cheese producers should create unique cheeses that reflect the local conditions, and recreate lost traditions. These would not be direct replicas of existing cheeses, but would hopefully evolve into brand-new cheeses, using methodologies and techniques from Britain and Europe as a starting point to create a new and unique cheese to each farm.

A quick look around British supermarkets also show there are many other obstacles to still overcome: levels of factory cheese production are extraordinarily high – 90% of all British cheese is still sold through the top six supermarkets, of which 55% is Cheddar). Britain may be producing good artisan cheese, but it is still not commonplace.  In fact with only one farmhouse producer of traditional Lancashire, two of Cheshire and just three unpasteurised Cheddar makers in Somerset; you may even argue that there has not yet been a revival when it comes to ‘true’ British cheese. What if they were to give up – those traditional cheeses would be lost for ever.

So it’s still early days, and to ensure the farmhouse cheese-making industry’s survival, it will need your support. You can help by buying some ‘proper’ farmhouse cheese (not just from us!) – you’ll be supporting the industry, traditionally sustainable farming and rural communities, and tasting a delicious slice of history.

Despite the decline of farmhouse cheese production as a result of the industrial revolution, by the early 1900s there was still a reasonable amount of cheese being made on the…