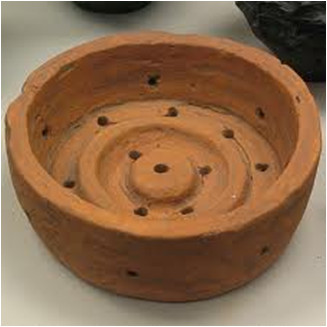 Cheese making was around in Britain during the time of the Celts, who simply let milk go sour (turning acidic exactly as it does today if you let your milk go off). This would have happened quite quickly in those days before refrigeration and efficient cleaning. The ‘souring’ curdled the milk, so that it could then be drained through cloth leaving behind a fresh cheese. We still have a legacy of this type of cheese in the UK – cottage cheese, for example, and Scotland’s Caboc and Crowdie (all now produced in this style in a much more controlled manner!)

Classic British cheeses as we know them today (hard, firm cheeses) really owe their legacy to the Romans. Those invaders brought with them tried-and-tested cheese-making techniques (including the use of rennet, which they’d learnt from the Egyptians). The addition of rennet causes milk to set into a firm curd. From this curd even more moisture (whey) can be removed, and a firm cheese, ideal for ageing, can then be made. Subsequent invaders and settlers to Britain (including the Vikings, Saxons and the French, with their monastic traditions) would also bring their own customs, traditions and cheese-making techniques.

The basic recipes having been established by the Romans and subsequent settlers, the next thousand years saw Britain develop a range of different cheeses. Just as with France and Italy, particular regions developed their own styles of cheese, depending on geography and climate (‘terroir’), political and market factors. As early as 1086 some regional British cheeses were becoming widely popular (The Domesday Book features ‘Cheshire Cheese’) and Cheddar soon became one of those. Nevertheless, these cheeses would have been completely unrecognisable to us today. 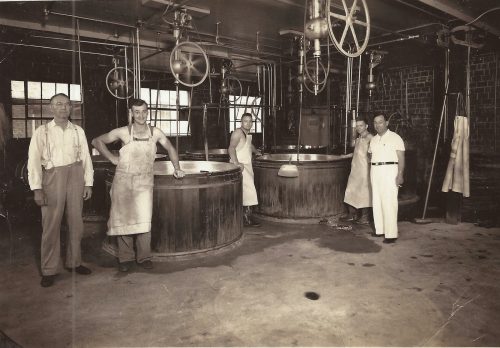 In some parts of Britain, especially in Scotland, which had had no Roman influence, softer cheeses were more common and blue cheeses tended to occur naturally (such as Stilton and Blue Wensleydale). This was a time when there was also an abundance of ewe’s (sheep’s) milk cheeses throughout Britain, because sheep were a popular grazing animal at the time (it is only from the 17th century onwards that Britain really started to favour cattle dairying and, consequently, cows’ milk cheeses). The original Wensleydale was made from sheep’s milk and was designed to be a blue cheese, similar to Roquefort, in response to a specific request by William the Conqueror for just such a cheese.

At the turn of the 18th century, cheese making had become commonplace on most farms, as the smallholders kept cows to supply their villages with milk. Surplus milk would be turned into cheese, and many of the regional variations had started to develop, with Cheshire being the most popular cheese and sold throughout Britain, transported via canal and ship.  But cheese was still made mainly to be eaten by the farmhands and locals for sustenance, not especially for trade.

However Britain’s position at the forefront of the Industrial Revolution (c1750 – 1900) led to significant changes, notably the urbanisation of the population, factory work and the development of major transport links such as rail. Suddenly, using the railway network, it was possible to get milk into the cities quickly and cheaply, to feed the masses working in the mills and factories. No longer was there a need to go through the effort of making and ageing cheese so that milk could be transformed into a longer-lasting stable product able to be transported. Britain became a milk-drinking nation and the amount of cheese eaten by Britons started its long decline.

At the same time, factories in the cities started to use leftover milk to make standardised cheese on a large commercial scale (the first factory to do so in 1870). As a result, farmhouse production and regional variations started to die out, and the close link between consumer and producer was diminished. 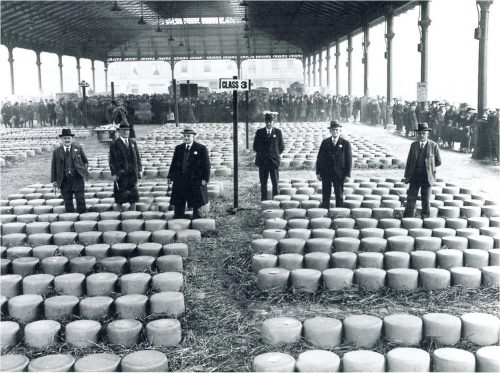 Factory production used milk from several farms. To reduce the risk of variability and problem batches, the dairy factories started to analyse the scientific factors that could enable them to make cheese consistently. Scientists and chemists led the way in developing a product that was more consistent: acid cheeses that had less variation than farmhouse ones but were often blander in flavour. For example, the introduction of starter cultures – specific bacteria – introduced consistency but removed the individuality created by the variety of cultures that had previously developed on each farm.

Countries that came later to the industrial revolution, including France and Italy, did not experience the extreme population changes and movement, nor did they have the same outreaching rail network to enable the transport of milk. In these countries, people remained tied to the land and local area, retaining the food taste preferences naturally influenced by rural life and traditions. Hence regional cuisine and cheese variations did not become blurred and die out as in Britain. These countries also sought to protect their cheeses through laws and regulations (such as Appellation d’Origine Contrôlée), which has helped maintain and protect their regional cheese identities and variations to this day. Britain’s failure to protect its cheeses in this way, especially Cheddar, has been regretted by gourmets and farmhouse cheese-makers ever since.

By the end of the 19th century, cheeses in Britain had broadly developed into the regional styles of cheese that would not be unrecognisable from similar farmhouse cheeses you still see today. Much of this was led by dairy professionals such as Joseph Harding and Henry Cannon (Cheddar) and Joseph Gornall (Lancashire), who had worked out how to make quality cheese consistently (such as using starter bacteria, measuring acidities, etc.) and coming up with standard recipes and techniques for each cheese type. Whilst there is no doubt this improved the overall base quality of cheese-making throughout Britain, it led to many farmhouse cheese-makers adapting to follow the tried and tested factory recipes that consistently produced good cheese, instead of following family traditions and methods. Gradually variations in styles of cheese making within each region started to die out. And even today the basic Cheddar recipe is largely based on the methods introduced by Harding and Cannon.

The traditional British cheeses that survived, developed and became famous as the cheeses we know today all shared very similar elements in production: acidifying the milk before before draining off the whey, heavy drainage of the curd particles, milling (breaking up the curd) and adding salt to the mass.  This led to these traditional British cheeses becoming known for their high-acid friable texture (in contrast to the supple, sweet notes of continental types like Emmental and Gruyère).

During this period many Britons (including farmers) started to emigrate to the New World. Not only did Britain lose many of its experienced farmers, but also the same farmers took their cheese-making methods with them (Harding and Cannon also set-up cheese-making schools in places such as the US and Canada). This was to have an effect on the British market for many years to come, as the British emigrants in the US, Canada, New Zealand and Australia went on to produce cheeses like Cheddar, but on a larger scale and much cheaper. With time their Cheddars started to be imported into Britain, competing against the small farmhouse British cheese for market share and on price (indeed at 1913, over 80% of cheese consumed in the UK was imported*), who couldn’t compete economically.  Times were looking hard for farmhouse cheese-makers… but it would get worse yet.

Read on in: A History of British Cheese part 3: The 20th Century and the Eradication of Farmhouse Production.

(*To this day Britain still imports each year around 120 tonnes of Cheddar from New Zealand, Canada and Australia)

Despite the decline of farmhouse cheese production as a result of the industrial revolution, by the early 1900s there was still a reasonable amount of cheese being made on the…