New cheese-makers on the block, Rachel and Fraser make Sinodun Hill goats’s milk cheese on their farm near Henley-on-Thames in Oxfordshire. Andy interviewed them to find out what makes these fantastic cheese-makers tick. 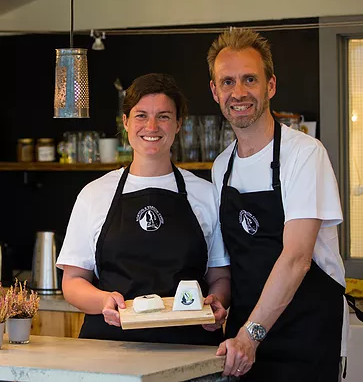 Give a brief synopsis of your business and career.
Fraser and I decided to become cheesemakers and start our own herd of goats in 2014, at which point I was Head of English at a local boys’ school and Fraser was a project manager, working on using mobile phone technology in international development. We got our first two goats and started making cheese in early 2016. We now have over 100 goats – pedigree Anglo Nubians – of which about 30 are currently in milk, so we are definitely on a micro scale.

What made you get into doing what you do?
We were looking for a new challenge and when we read an article about an existing cheesemaker with a small herd of goats, it really captured our imagination. I had always wanted to work with animals and Fraser always talked about wanting a goat (note, ‘a’ goat!), and we both had farming in our families, so it felt like a return to family traditions. We also both love eating cheese – my first ever present to Fraser was a selection of artisan cheese – and understanding the science behind cheesemaking appealed to Fraser’s background as a chemist (he has a PhD in chemistry).

What is your philosophy for your food/business?
One thing is to achieve the highest possible standards in a small, traditional business. We wanted to bring the professionalism from our previous careers in much larger organisations to a microbusiness and whether its the animal welfare or climate in the maturing room, we are always looking at how we can improve things and learn from others. 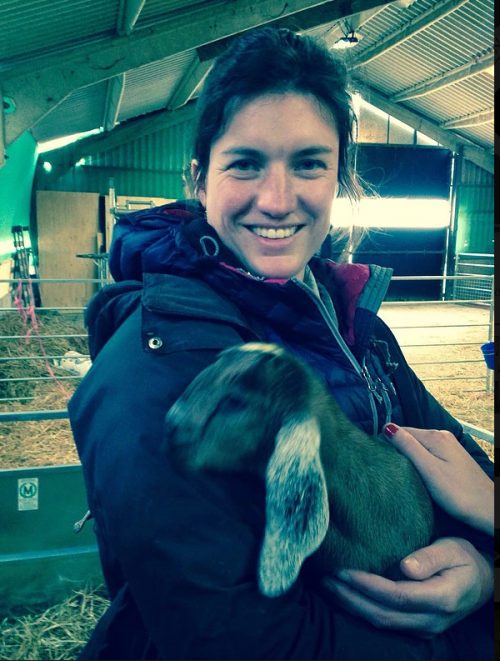 Describe a typical working day.
Milking starts around 8am and Fraser usually milks while I feed the goats, often with Gabriel (our toddler) in tow. This takes a couple of hours and then it’s on to cheese making. There are usually a few hours of actual making Sinodun Hill cheese (starting a make, ladling, moulding up cheeses etc), then routine tasks like turning cheeses and packing and wrapping them to go out to customers. Cleaning also occupies a good portion of each day! We milk again around 4pm the afternoon and feed and bed down the goats again.
Depending on the time of year, there are other jobs like looking after newborn kids, trimming hooves, putting goats out or bringing them in, depending on the weather, and sometimes dealing with goats being places they shouldn’t – their reputation as escape artists is definitely justified! After dinner we often do admin, but make sure that at least a few times a week we get a chance to cook a really nice meal and unwind.

What’s the best part of your job? And do you have a favourite memory from work?
Being able to work together is great – we enjoy each other’s company and it’s also nice to be able to do a job where we can have Gabriel around as he loves the goats. It’s very satisfying to make a product that people enjoy, too, and to see that all the work and thought that goes into every cheese is worth it. A great memory was winning our first ever medal at the Artisan Cheese Awards in 2016 – it was only a couple of months after we’d sold our first Sinodun Hill cheese and we weren’t expecting anything so it was a hugely exciting moment to get a Silver. And a relief that someone else liked what we were making, given we had quit our jobs to make cheese!

When you are at home what is your staple dish for the family?
We eat a lot of bread and cheese! Roast veg topped with Sinodun Hill is our other standby.

What is your favourite place to go eat (if you’re not eating at yours!)?
There’s a lovely tapas restaurant called Al Andalus in Oxford which we love.

Do you have any other hidden foodie gems you think are worth people knowing about – shops, producers or otherwise?
There are some brilliant small farm shops local to us – Sandy Lane Farm, Blue Tin Produce and Ten Mile Menu. Two North Parade in Oxford is a fabulous little shop too hidden away on a side shop which has an awesome cheese selection and other local produce. The Wallingford Local Producers market would be my last recommendation- and the first people who ever took our cheese to sell.

Do you have a favourite cheese at the moment? If so, why is it your favourite?
It’s hard to pick a favourite, but you have to go a long way to beat a ripe Baron Bigod or Rollright.

If you had to choose a drink to go with cheese what would it be? and why?
A fruity Zinfandel would be the go-to, but we have also enjoyed Sake alongside Sinodun Hill (it’s very nice!) and my own homemade hedgerow wine also works surprising well (but not for the faint hearted…)

Where do you look for inspiration in your business?
Other small cheesemakers – I have never met a friendlier or more open bunch of people and the creativity and resourcefulness that people bring to bear on the multiple challenges of running all the different parts of a cheesemaking business is endlessly inspiring.

What couldn’t you live without? (ingredient or equipment!)
Baler twine! The number of uses it has is quite amazing. We haven’t used it inside the cheese room yet but it has served in practically every other part of the farm.

What is the best success you’ve had with your product?
Sinodun Hill winning Best New Cheese at the Artisan Cheese Awards in 2017.

What is your plans for the future?
We’re only just recovering from building a new cheesemaking room, which took up most of last year, but now the dust has settled on that we’re starting work on developing a second cheese and looking at how we graze the goats to improve our pasture rotations and the range of species in the sward.

Free delivery with orders over £55
Standard delivery - £5.95
Sign up to the newsletter