A bit of cheese science 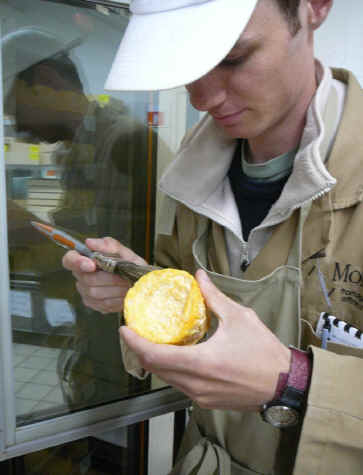 Guilliame was over the moon. I could tell this because his normal gruff French expression had been replaced with the beginnings of a smile at the corner of his lips. And why? Because his Ossau Iratys had begun to get some small spots of red mould. “That bacteria,” he said, “looks good, and the Ossau Iraty taste even better.” So why had it been missing for the last few months? Problems with the Ossau’s acidity and the micro-bacteria balance had meant it was not present. But luckily it had returned to the cave.

It got me thinking about moulds. At Mons Fromages there is an excellent balance, which has built up over many years. But they still need encouraging and pointing in the right direction – as we’d seen, that slight change in acidity with the production of Ossau had meant we’d lost our dear old red spotty friend. There are obvious ways you can encourage some bacteria – for example washing the Livarot and Epoisses twice weekly in a secret recipe, alongside keeping it in a humid atmosphere, helps it form ‘Brevibacterium linens’ – the orange mould responsible for the smell and flavour on washed rind cheeses.

However it’s not that simple with others: to encourage the blue penicillium spots you see on some goats cheeses (e.g. Crottin de Chavignol, Pouligny St. 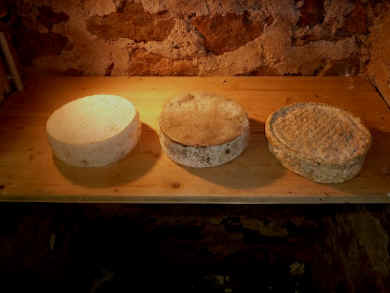 Pierre) we have to act in different ways. Some cheeses form it better on straw; others form it too fast and dry out too quickly on the straw. The expertise I’m picking up here is knowing when and where to put each cheese, not only according to type but also by how it arrives and how it is responding this week (this expertise has been built up by continuous testing of every possible variable over the last 40+ years). Simply, it’s the balance between the atmosphere, humidity and temperature to enable the correct moulds and yeasts to grow. We try to facilitate this by using different materials: wood, straw, paper, stone and earth. A slight change in either may mean a different mould or yeast may be more successful and a different product is produced.

Another example is our Lingot de St. Nicolas: we are trying to form a cream line beneath the rind, just thin enough to enhance the flavour but not so big so as to form frog-skin (when the rind and paste detach itself). The mould responsible is geotricum. Luckily our caves are full of it – but we have to catch the Lingot at the right time before it goes too far, whilst also making sure the other moulds present are also fully formed for the flavour! 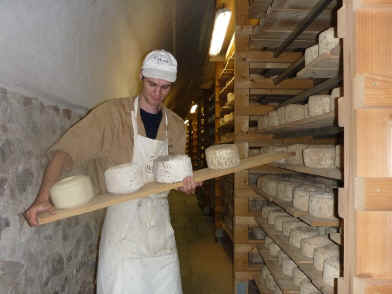 When I leave I am going to have to take a lungful of air and hold my breath to take some of the air and moulds with me!

The pictures here show the evolution of (left) Tomme de Bois Noirs (a Mons speciality) and (right) Lavort. Forming the correct ‘mucos’ and initial rind takes the right conditions and handling; you can see the development to the final product. This affinage has developed the texture, smell, taste and rind to the point when it’s at its best; without correct affinage of the cheese the characteristic of each cheese won’t truly reveal itself to its full potential or may go too far, as bitter/rancid flavours, disagreeable odours and bad textures start to develop.