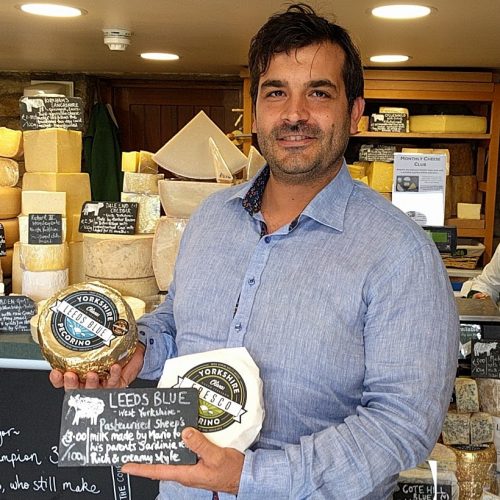 n 2001 Mario arrived from Italy into Leeds/Bradford Airport.  He spoke no English, and had just £200 in his pocket, and the promise of a friend’s floor to sleep on.  He had come to learn English for six months before going back to Sardinia.

20 years later he is still here: married with kids and an award-winning cheese business.  And his English?  Well – it’s better than many of the Yorkshire folk he learnt off!

Mario’s aforementioned friend who had promised him floor space to sleep on soon disappeared (four days later) so Mario had to integrate quickly.  He became friends with local Italian restaurateur Alessandro Tocca of Buon App in Otley, and soon after met his future wife to be, locally-born Sonia. 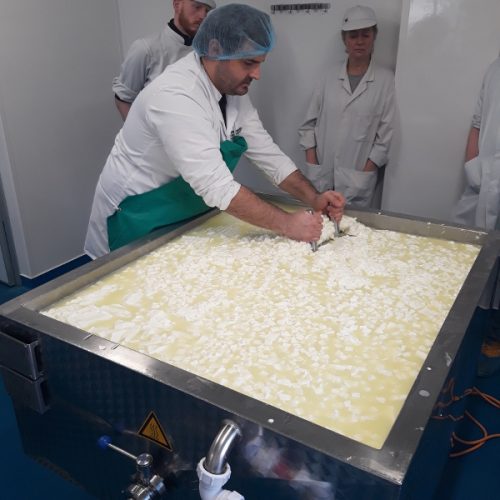 But it was a visit home that would change his future. Back in Sardinia Mario’s brothers were making cheese in their own home using local sheep’s milk. Mario, being a competitive sort of guy didn’t want to be outdone by his brothers and saw that there was no true ‘Italian-style’ sheep’s milk cheese (‘Pecorino’ is Italian for sheep) being made in the UK. So as soon as he returned home he got his hands on a big 50-litre stockpot, a whisk and some sheep’s milk from local farmer Chris Heslop at Harrogate, who keeps several hundred dairy sheep out at pasture near the Yorkshire Show Ground.
Using fresh milk straight from that day’s milking Mario started to create a young (fresco) Pecorino,. Commonly found in Sardinia, the fresco style of Pecorino was relatively unknown in the UK, where only the harder-aged piquant Pecorinos were on offer. The young, supple-sweet
‘Yorkshire’ Pecorino, matured for just 30 days, allowed Mario to set up his business quickly because he could start selling the product on local farmer’s markets in as little as 30 days and use the leftovers from production for his supper clubs (ricotta filled donuts, cannoli’s and whey made-breads).

Following traditional Italian recipes (slightly warmer making temperatures than UK cheeses), he even went as far as only importing Italian salt, but he stopped this when he found Italian salt ‘too salty’?!)  Soon after he developed an aged Pecorino (Fiore) to add to his range, a Haloumi-style and eventually a blue cheese, Leeds Blue.

Leeds Blue came about from Mario tasting other sheep’s milk blue cheeses and thinking they were pretty special – there wasn’t a history of it in his native region but he decided he’d have a go.  So following the exact same recipe as his young Pecorino fresco, he tried just adding only a small amount of blue mould spores and piercing the cheese at a few days old (30-40 times with a knitting needle!) to allow the blue to grow and give it a mild, delicate blue veining to counteract the rich sheep’s milk.  Leeds Blue was born.

Up until last year all these cheeses were still made in a converted back-room in the very tolerant Sonia’s house.  But with 11 cheese-maturing fridges crammed into the back room and garage, and every day making small amounts of cheese in a tiny vat, Mario and Sonia decided to make the jump to rent a unit in nearby Otley in which to make the cheese.  First of all the coffee machine got moved so double espressos could be made at the new site.  Then Mario decided the business could follow – and Mario moved production in late Spring 2021.

But he has kept with him the original stockpot, whisk and cheese-mould from day one – which are still involved in parts of the cheese-making – he says he can never part with them as long as he makes cheese!

What’s the best cheese to cook with? – The science behind choosing the right cheese for your dish.

Cheese and Beer Matching – by John Kelly of Kirkstall Brewery

How do you match beers with cheese? Does it really work? And is beer as good as, or better than, wine or port with cheese? There are certainly particular styles…