Earlier this year The Courtyard Dairy visited Botton Village Creamery. Botton is part of the Camphill Village Trust (CVT), and was the first and still largest Camphill created. Below is a brief recollection of my visit.
It was very early on a chilly Winter’s morning when I met Andy at the Courtyard Dairy, for my first producer visit as trainee cheesemonger. I was fairly apprehensive about what the day would entail, but was intrigued to see how cheese was made first hand as until that point I had only read about it in various forms of literature and on telly.

We set off and went via Pateley Bridge to pick up Andrew Hattan who was also coming along with us to see how things were done first hand for his own startup cheese making business. After a couple of hours intently listening, but not fully understanding, cheese talk from Andy and Andrew, we were nearing our destination. 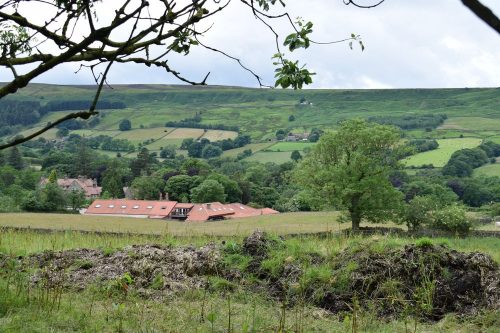 The views were spectacular on the North Yorkshire moors and when we dipped down into the valley where Botton is situated, you could tell it had to be self sustaining as there is barely anything else remotely near the village.

We parked up, and as the first there, we went straight to the Creamery and met the cheesemaker Alastair Pearson. I introduced myself to him and learnt that he grew up at Botton and farmed there and then went over to make cheese in Germany, where he did the majority of his training. I say majority, as I now know that the process of making cheese has many variables, and a lot of learning comes through day to day work, making mistakes, and tweaking recipes, but all in the process of trying to make great, tasty cheese.

The main cheeses made at Botton Creamery, that we sell at the Courtyard Dairy, are Dale End Cheddar (which is aged for around 18 months), Moorland Tomme (a French alpine style cheese), Summerfield (very seasonal and produced only when the cows are out at summer pasture), and occasionally the Gouda and cumin Gouda. Cumin Gouda might sound a tad strange but is very interesting and fragrant, and nowhere near as strong as I thought it would be even though there are whole seeds throughout the cheese. 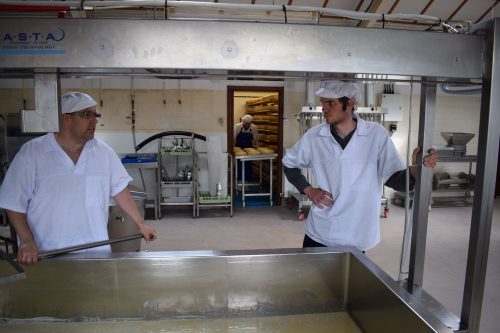 We got scrubbed up and began watching the process turning the raw milk produced on the farms into cheddar. It was very interesting to see the setup and according to Alastair, the kit he uses to make his cheese is fairly high tech and imported from Germany, so is also probably very familiar to him. After the starter bacteria was added and stirred in, vegetable rennet was added to begin the process of separating the curds from the whey. At later stages throughout the day we saw the whole processes from start to finish, which has greatly enhanced my understanding and knowledge of cheesemaking.

While renneting was taking place we had a look round the cheese store and I got the chance to help grade and select from various batches of Dale End Cheddar to see which ones we would be taking back to the store to sell next and in which order. What was very interesting was the fact that cheeses are not necessarily sold in the order of date they were made but on how they are tasting and the overall quality. We also got time to wander round with a guided tour getting a peek at the milking parlours, which were small and clean, nothing like the huge dirty ones you may have seen. 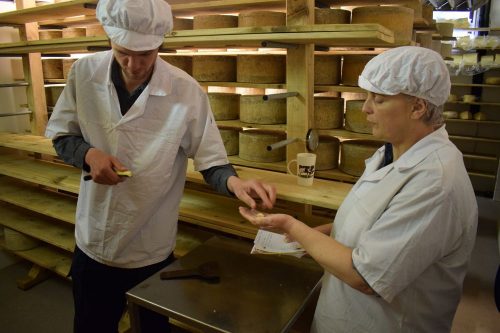 The two farms produce milk from only 46 dairy shorthorn cows and also produce all their milk to Demeter biodynamic standards. Even though there is a lot of controversy surrounding biodynamics, a few things that are seen to be important to cheesemaking, but not limited to, include the following: 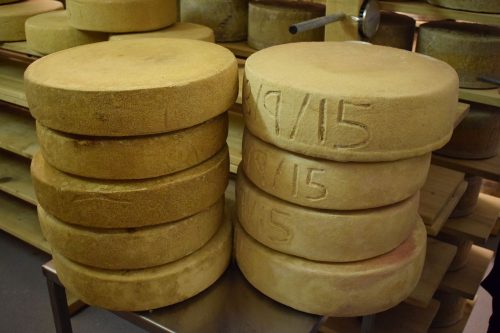 t Botton they use the dairy shorthorn cow, a very versatile breed which produces a rich milk containing almost equal fat and protein (3% of each). This breed of cow is quite docile but can produce large quantities of milk over its long lifespan and one of the oldest cows at Botton had had 15 lactations. To put this into perspective, a black and white Holstein might only have around 2-3 lactations before it has had enough. Because of the high yield, performance and stress put on Holsteins, the meat is not really useful. The shorthorn on the other hand, after many lactations and a good long life, has a high salvage value and the meat is suitable for good quality beef products.

After saying our farewells to Alistair and the team, we did have to load up the car with our selected batches and shoot off, but it was an excellent day out and was just great to see a working village where adults with mental and learning disabilities could get employed, and use their abilities to help provide for themselves and others, not just through turning milk into cheese but also by growing their own crops in glasshouses. Everyone is treated as equals and there are jobs to fit every skillset, including a bakery, coffee bar, wood workshop, glass workshop, bookshop, dollshop, candleshop and weavery.

Botton Village is open to the public so it is certainly worth a visit if you are over that way!