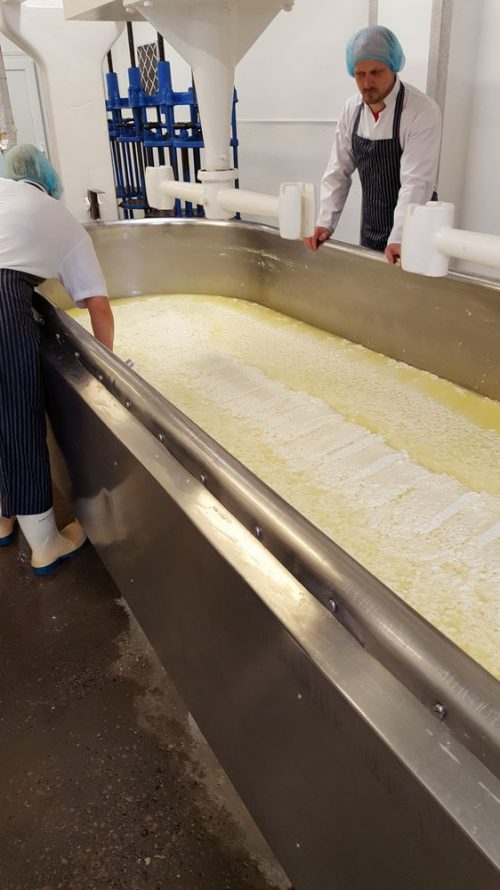 Last month, along with my colleague Sam, I met Andy at the Courtyard Dairy ready to set off for a day of fun-filled excitement making Kirkham’s Lancashire. Even though I had been on my first cheese outing to Botton Village earlier in the year, I was still very excited as it was Sam’s first visit to a cheese-maker to see first hand how the process is carried out. What better place to start than one of our most popular cheeses?!

We set off to Beesley Farm, which is situated in Goosnargh, Lancashire, just outside Preston. This is the area where traditional Lancashire cheese comes from, which is in the valley of the River Ribble fairly close to the estuary mouth. Soon after leaving, we picked up Kathy and little baby Walter, who along with Sam, was also having his first visit. This was mainly because the famous Mrs Kirkham (Ruth) wanted a cuddle.

Upon arrival, Graham Kirkham, the head cheese-maker, was busy on the phone, so we were kindly ushered by his partner Kellie into the staff kitchen for a brew. We met a handful of their team, including their son Mike, who has been working alongside Graham full-time since the beginning of 2015. As there is quite often no rest for the wicked, before we knew it we were gearing up to head into the cheese-making room, to assist in the making of the only unpasteurised Lancashire made anywhere in the whole world!

Graham by this point had finished on the phone and introduced himself and Amy, one of his very few staff members, to us and we got geared up to make cheese (including a beard cover!). The working day starts very early when making cheese, so by the time we had arrived at 9:00 am, already three to four hours of hard work had been done. The morning milk from Graham’s herd of 100 Holstein-Friesians was already in the vat setting, after the addition of starter bacteria and rennet earlier that morning. Starter bacteria are used to acidify the milk and subsequently turn lactose (a disaccharide sugar) into lactic acid. Very little starter is used to make Kirkham’s Lancashire, which we saw stored later in the day, so the acidification process is very slow – perfect for the traditional two-day curd method used. Rennet is used to coagulate the proteins (casein) in the milk into what we know as curd and separate out the whey, which is drained off later.

While this process was still taking place in the vat, we got involved. The Lancashire cheeses that were being pressed in the moulds from the previous day needed knocking out, so Sam rolled up his sleeves and cracked on. The process is fairly simple, starting by removing the metal disc, flipping the mould and knocking out the cheese. I mention this is simple, and we only got to do a few, but imagine doing this seven days a week with cheeses that weigh in at 10kg or 20kg each! The cloth binding was then tightened and the date was added ready for the cheese to move into the cheese store for ageing. 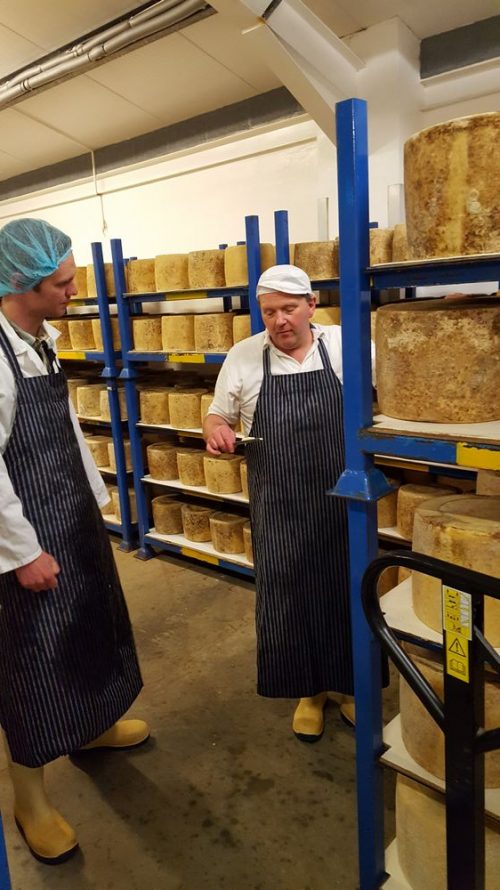 We then got a respite and a look round the cheese store. It was quite amazing to see how many cheeses they actually make, as the store was very full. Andy was getting his cheese iron out, so we knew it was time to start tasting some different batches of Kirkham’s Lancashire cheese to choose which take back to the Courtyard Dairy. This is one of the great things about being able to visit producers – you can pick exactly which cheeses fit your profile. We are one of only a couple of stores that still get receive 20kg truckles, which age slower and for longer, and which makes our Kirkham’s Lancashire taste extra special.

We also got to look round the farm and to see the herd, which was happily munching its way through some “old crop” (which is better for them than silage), as the cows were not yet out at pasture. Graham Kirkham grows his own feed on the farm using his own combine-harvester, rotating his fields as to when they are harvested and which crop is grown. The cows that weren’t enjoying their food were queuing up for the comfort brush, which is basically a big, mechanised, yellow back scrubber. Tests have proved that it enhances a cow’s happiness and cleanliness as well as increases output of milk: it’s an excellent little machine to help on the way and as a prerequisite to keeping unpasteurised milk safer. We also saw the very small building where, back in the day, Mrs Kirkham (Graham’s Mum) would make the cheese. Since then, because of the popularity of the overall business, a bigger creamery was made in 2007. A brief visit to the milking parlour ensued, followed by kitting back up for the next round of work.

Now the curds were set, it was time for the cutting and allowing the whey to begin draining away. After a while most of the whey drained away naturally, but to help the process along, curds from the outside rim of the vat were scooped up and piled in the middle on the curd that was left. This released more whey as the pile in the middle got more compacted. This process was continued till all the whey had drained away, which took just over an hour. This mechanical process is essential to remove the moisture from the curd, but at Kirkham’s they have to do this a lot by hand because they use so little ‘starter bacteria’ – which would help the process but not produce the same quality of cheese. 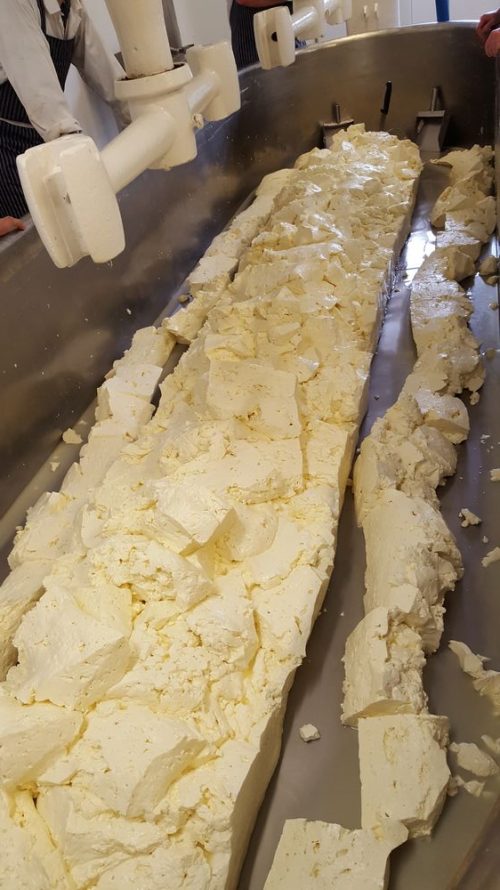 Wielding something that looked similar to a machete, Graham cut the curds ready to stack by hand. After another while, the curds were at the right consistency to be lifted into the muslin-lined draining table and we all helped Amy and Graham with this laborious task. Once all the curd was in the draining table, we broke it down by hand into even smaller pieces and then these were pressed using hydraulics to remove any remaining moisture.

One last job before a late lunch was the milling and forming of the curds from previous days. As mentioned, the two-day method is used to make creamy Lancashire cheese, which means using half the curd from yesterday’s milk and half from the day before that. Salt is added to the curds after it has been milled for the first time and then it is passed back through the mill to mix this through. While Graham was milling, Sam filled the moulds with the ground up curds and then placed them on the traditional wind-down presses ready for Amy to press later in the day. Whilst they were occupied, Andy and I went back into the store and did some rubbing down of the ageing Lancashire cheeses, to remove some of the surface mould. This is just general care, but it helped Graham out, and every little helps. Andy certainly wasn’t paying us to just stand around and watch all day!

It was finally time for some lunch, with food lovingly made by Ruth and a spread put on by Kellie.

It was time to say our farewells and retrieve Kathy, and Walter from Mrs Kirkham’s cuddles. We did the rounds and thanked everyone for the opportunity of an insight into the life and workings of Kirkham’s Lancashire and Beesley Farm; a fantastic example of a family farm making quality and unique cheese.

Read about the different Lancashire cheeses: crumbly, creamy and tasty.  Find out more about how they came about and what makes them taste so different!